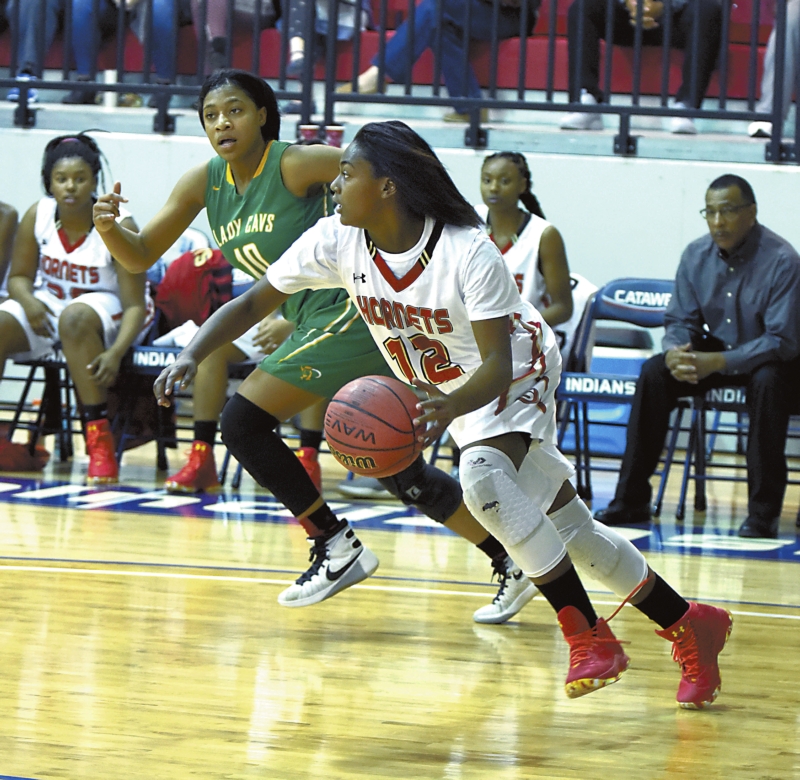 SALISBURY — Salisbury girls basketball coach Lakai Brice wore a smile as wide as one of the rims at Goodman Gym after the Hornets flattened North Rowan, 71-35, in Wednesday’s first round of the Dale’s Sporting Goods Sam Moir Christmas Classic.

“We got a monkey off our backs today,” said Brice, referring to both the Cavaliers and the Moir tournament.

But those were Hornet teams that usually scored in the 40s. The current one often pushes into the 60s and has a standout in each class in senior Tyzarea Alexander, junior Maria Capito, sophomore Bryanna Troutman and freshman Anayia Fulson. These Hornets can step on the gas pedal and keep a foot down for five minutes at a time.

“Lakai has put in the work, and her team has bought in,”  North coach Ron Bost said. “Yes, she has  good players. But the biggest thing today was how hard they played on defense. That defense fed their offense.”

It was over quickly.  A 3-pointer by Capito put  the Hornets ahead, 11-4. When Jinika Glenn made two free  throws to close the first quarter, the Hornets were up by 27-8.  When Troutman raced for an easy two to beat the halftime  buzzer, it was 42-13.

“We got a lot of transition points,  and that’s what we wanted,” said Troutman, who had 24 points and 10 rebounds. “We were well-prepared for this game.”

Fulson had seven steals and was the key to a fierce pressure defense that generated lots of layups and free-throw opportunities.

“We did a lot of good things today,” Brice said. “We rebounded the ball and we pushed the ball on rebounds and on  turnovers. We got into a good flow.”

Fulson and Troutman combined for 16 of Salisbury’s 18 points in the third quarter as the Hornets (7-1) expanded their lead to 60-24.

Troutman and Fulson, who produced a career-high 22 points, became the first Salisbury teammates to top 20 points in the same game since Brielle Blaire and Doreen Richardson led a romp against West Davidson in the 2011-12 season.

North Rowan senior Brianna White managed to keep the Cavaliers’ deficit under 40 points — and the automatic running clock — most of the way. She scored 13 points.

Salisbury, which posted a season-high total for points,  enjoyed one fabulous half-court possession . There were eight crisp passes before Fulson buried a straight-on 3-pointer. The Hornets finally pushed the game  to the running-clock  stage when a paint bucket by Troutman made it 64-24 in the closing minutes.

Eighth-seeded North (0-8) finished the game with a mini-flurry of five quick points by Taren Sherrill.

“Playing hard isn’t a problem for us, but we’ve got to find a way to score some points,” Bost said. “I believe we’ve got the same kind of athletes Salisbury has, but right now, we’re just not playing like it.”

North topped 30 points for only the third time.  Aundrea Godfrey (knee) made her season debut for the Cavaliers and scored six .

Salisbury will play in a semifinal today at 6 p.m. against fourth-seeded Mooresville.

North Rowan will play against South Rowan in a noon consolation.