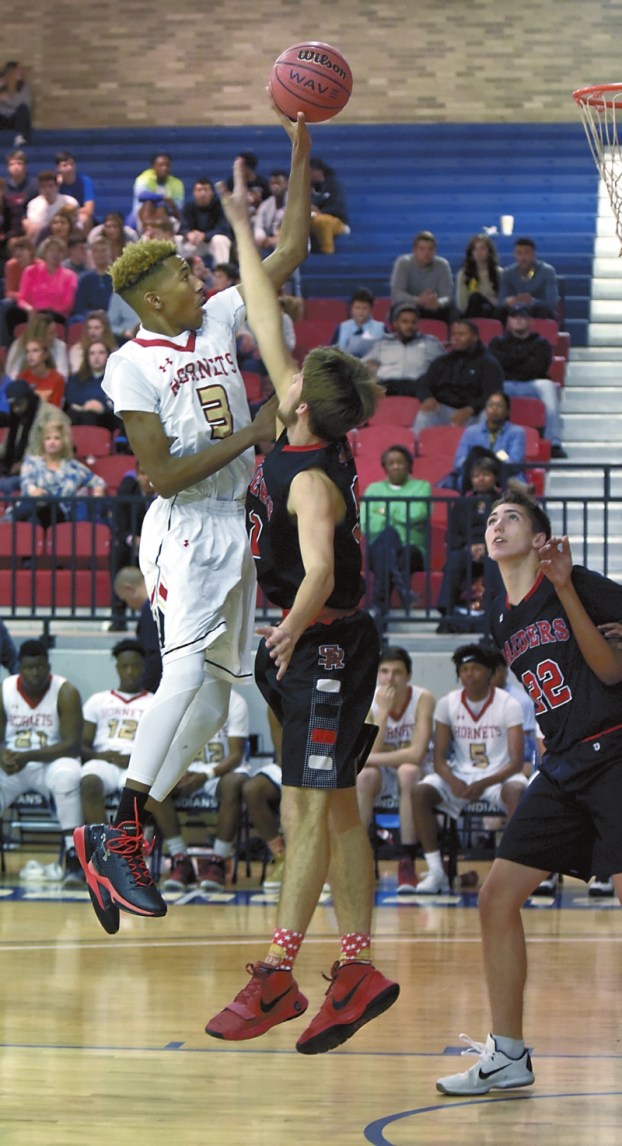 SALISBURY — Tre Oats and Will Leckonby, Salisbury’s top two scorers, combined for a modest seven points on Wednesday, but it hardly mattered.

The Hornets still strolled to a 66-23 romp against South Rowan in Wednesday’s first round of the Dale’s Sporting Goods Sam Moir Christmas Classic .

“This was mostly a defensive win,” Salisbury guard Trell Baker said. “We came out with the right mindset defensively and we held them to 15 points in the first half.”

The lopsided result was not unexpected. The top-seeded Hornets (6-2) already had throttled the eighth-seeded Raiders, 66-30, in a meeting prior to Christmas.

For Salisbury coach Bryan Withers, the biggest concern was rust.

“We were playing for the second time in about 18 days,” Withers said. “So we just wanted to do what was easy. That meant playing good defense and letting our defense lead to quick offense.”

Salisbury was in control, 19-8, after a quarter and stretched that lead to 41-15 at the break.

Baker got the Hornets started with good decisions, tough defense, and by pushing the ball after South’s numerous mistakes.

“He’s learning to be that point guard we need,” Withers said. “He always was a scorer, but now he’s  getting everyone else involved before he thinks about looking for his own shot. We want him to shoot layups and we want him to take open shots, but  he’s doing a good job of finding his teammates.”

The decisive run was triggered late in the second quarter by a group of Salisbury reserves, led by Byron Goodlett. Goodlett had three buckets in a flurry, as the Hornets outscored South, 14-1, in the final three minutes of the second quarter.

Then Zadrian Harris had an explosive run for the Hornets to open the third quarter.

Bailey Graham scored in double figures for the eighth time and  did what he could to lift South. His 12 points were more than half of  the Raiders’ team  total.

South (0-11) has lost 35 straight games dating back to last season. The Raiders have dropped six straight Moir contests. Their last win in the tournament came in 2014 when Withers was coaching South. Ironically, he guided an eighth-seeded South team to a  first-round victory against a top-seeded Salisbury club.

But there were no similar miracles on Wednesday.

South coach Andre McCain wasn’t thrilled with what transpired. He felt his team could’ve competed longer, harder and better. A jumper by Salisbury’s Elijah Moss made it a 40-point differential and a running-clock game before the third quarter was in the books, and  running-clock games can be demoralizing.

“I’ve tried every trick in the book to get us going, and I wasn’t happy with the effort,” McCain said. “Salisbury is a very good team, but I know we can compete  better than we did. I’m not giving up, and I know our guys aren’t giving up.”

It was a season-low points total  for the Raiders, who suffered a similar 68-23 loss to Carson last season in the Moir tournament.

South’s record for fewest points in a game is still 18. That output came in the famed stall game against West Forsyth and Chris Paul in 2002-03.

Salisbury takes on West Rowan in a 7:30 p.m. semifinal tonight.

By Mike London mike.london@salisburypost.com SALISBURY — Salisbury girls basketball coach Lakai Brice wore a smile as wide as one of the... read more