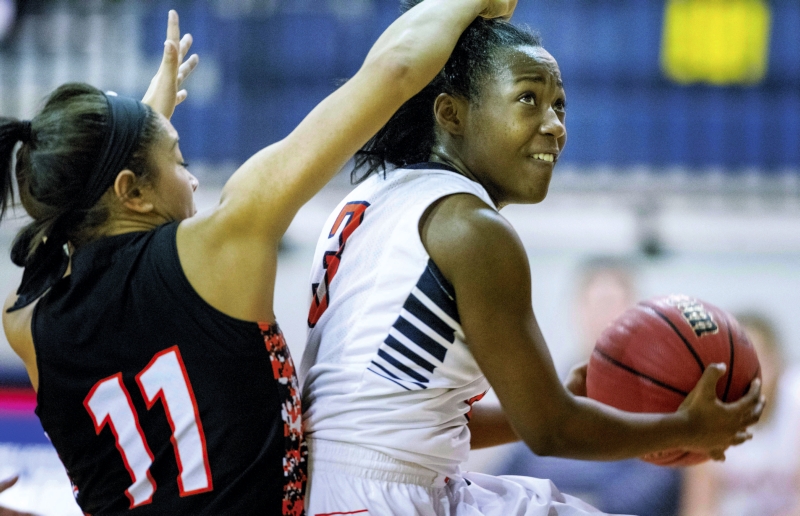 The bad news was only making six 2-point buckets in a 50-38 loss to Carson. Davie used the 3-point line to make it a competitive game, slicing a 19-point deficit to just eight with a flurry  of makes from long range late in the third quarter.

Carson junior guard Olivia Gabriel transformed  an awful game into a heroic outing after halftime. Scoreless and foul-plagued in the first half, she poured in  18 points after the break.

“She’s just really strong with the ball,” Davie coach Kevin Revels said.  “A lot stronger than the kids we had guarding her.”

Emma  Slabach and Sha’Veh Martinez made 3-pointers in the first quarter as seventh-seeded Davie (1-8) took a surprising 10-8 lead against the second-seeded Cougars (10-2).

But in the second quarter, Carson enjoyed an 11-0 run fueled by McKenzie Gadson and Anne Marie Turney. Those two dominated with points in the paint. The Cougars blasted Davie in the quarter, 15-3, and seized a 23-13 halftime lead.

“We were solid for a quarter,” Carson coach Brooke Misenheimer said. “Our zone defense was pretty good, and we held them to three points.”

Then Gabriel came out hot in the second half and swished two 3-pointers as the Cougars’ lead swelled.

“In the first half, my layups went in and out, I couldn’t find any rhythm and I never could get in the flow,” Gabriel said.

Things flowed so well for Gabriel in the third quarter that Carson surged ahead, 34-15, and appeared on its way to a blowout. But in the latter stages of that quarter, Carson made careless mistakes and Davie finally got some long ones to fall.

“We couldn’t get anything to go in, in the first half, but I told the girls if they kept running our offense, eventually shots were going to drop for us,” Revels said. “They stayed with it, they executed, and the shots did begin to fall.”

Freshman Rylea Carter drained two long ones, and Maddie Bohannon made one. Davie also was getting some nice work inside from 5-foot-9 sophomore Morgan Lewis, the closest thing the War Eagles have to a post player. Davie closed the third quarter with an 11-0 spree and trailed 34-26.

“They weren’t driving at all, they were just shooting 3s,” Gabriel said. “But we weren’t doing a very good job of getting out on their shooters.”

Carson’s coaches were getting antsy but when Gadson, who finished with 14 points, got a rebound bucket and Gabriel found Destiny Jackson  for a layup, the Cougars were back in control.

“Hopefully, we learned we can’t take anything for granted,” Misenheimer said. “We had a big lead, but we lost some focus, and nothing in this tournament is ever a given.”

Gabriel did a nice job handling the Cougars’ delay game. She made six free throws and two driving buckets in the final quarter.

While Davie outscored Carson, 24-6 from the 3-point line, Carson had a 16-2 advantage at the foul line.