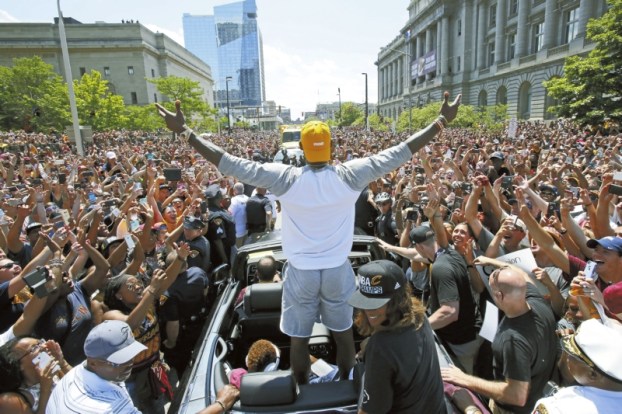 FILE - In this June 22, 2016 photo, Cleveland Cavaliers' LeBron James, center, stands in the back of a Rolls Royce as it makes its way through the crowd lining the parade route in downtown Cleveland, celebrating the basketball team's NBA championship. On Tuesday, Dec. 27, James, who ended 52 years of sports heartache by bringing Cleveland a championship and used his superstar platform to address social causes, was chosen as The Associated Press 2016 Male Athlete of the Year. (AP Photo/Gene J. Puskar, File)

CLEVELAND (AP) — LeBron James was jolted forward when the massive crowd swelled from the sidewalks and into Cleveland’s streets, surrounding the convertible that he and his family were riding in. This wasn’t supposed to happen.

James looked at his wife, Savannah, their baby daughter and two sons and feared for their safety.

“We were kind of afraid for a second,” James said.

Scanning the crowd, James spotted people dangling from lamp posts and traffic lights, even a few straddling window ledges to get a glimpse of the champion Cavaliers, who were being honored with a once-in-a-generation downtown parade after their comeback in the NBA Finals. James was awe-struck, and any concerns quickly melted away when he looked at the spectators’ faces and saw only smiles, laughter and tears of joy.

“Everybody was just rejoicing in grace and happiness,” James said, fondly reflecting on the picture-perfect day in June when Cleveland was transformed into a giant block party. “It was more than I could have ever imagined. It was unforgettable, unbelievable.”

And he had made it possible.

James, who ended 52 years of sports heartache by bringing Cleveland a championship and used his superstar platform to address social causes, was chosen as The Associated Press 2016 Male Athlete of the Year, an award he won previously in 2013.

Results of the vote by 59 editors from AP member newspapers and customers were announced Tuesday.

James collected 24 first-place votes, beating out a pair of Olympic legends: Michael Phelps (16) and Usain Bolt (9), the fastest men in water and on land who are not accustomed to finishing behind anyone.

James joined Michael Jordan as the only NBA players to win twice. Jordan won it three straight years from 1991-94.

A rabid sports fan, James was flattered to be in the same class with Phelps, the 23-time gold medalist who added five more to his record collection at the Rio Olympics.

“To be that dominant in your respective sport, to see what he’s been able to do over the years, what he does in that water, man, it’s tremendous and very inspiring,” James said. “When you have that type of tenure to be able to dominate, when you know that the entire competition is gearing up to beat you — and only you — and you’re still able to come away No. 1 or always be at the top of the food chain, that’s very inspiring.”

That James received the honor in an Olympic year underscores the weight of his accomplishments.

His third NBA crown was for Cleveland, delivering on a promise James made to a city that hadn’t celebrated a major championship since 1964 and had endured many torturous sports moments since.

After the final horn, James collapsed on the floor and when asked moments later about his emotions, the Ohio native who proudly says he’s “just a kid from Akron,” screamed at the TV camera: “Cleveland, this for you!”

“At that moment,” James said, “I felt fulfilled. To know the history of our sports here and how heartbreaking at times it was for all those years that our fans had to go through, and the circumstances that we came back from, it was so fulfilling.”

James’ journey to his greatest triumph coincided with the passing of another great — the greatest of all — as Muhammad Ali died on June 4. During the playoffs, James watched tapes of Ali’s fights for motivation.

It was in the spirit of the boxing legend and global ambassador that James stood on stage with close friends Dwyane Wade, Chris Paul and Carmelo Anthony at the ESPYs in July to decry violence against unarmed black men and encourage fellow athletes to do more to support local police and improve communities.

James later donated $2.5 million for a Smithsonian exhibit honoring Ali, and he’s producing a documentary on the champ.

“He’s definitely a person I’m inspired to be like, to have a social conscience about things,” James said. “What I always saw in Ali was that he was always educated about everything he was speaking about. He was never just talking to be talking. There was a method to the madness.

“Ali definitely showed me the way.”