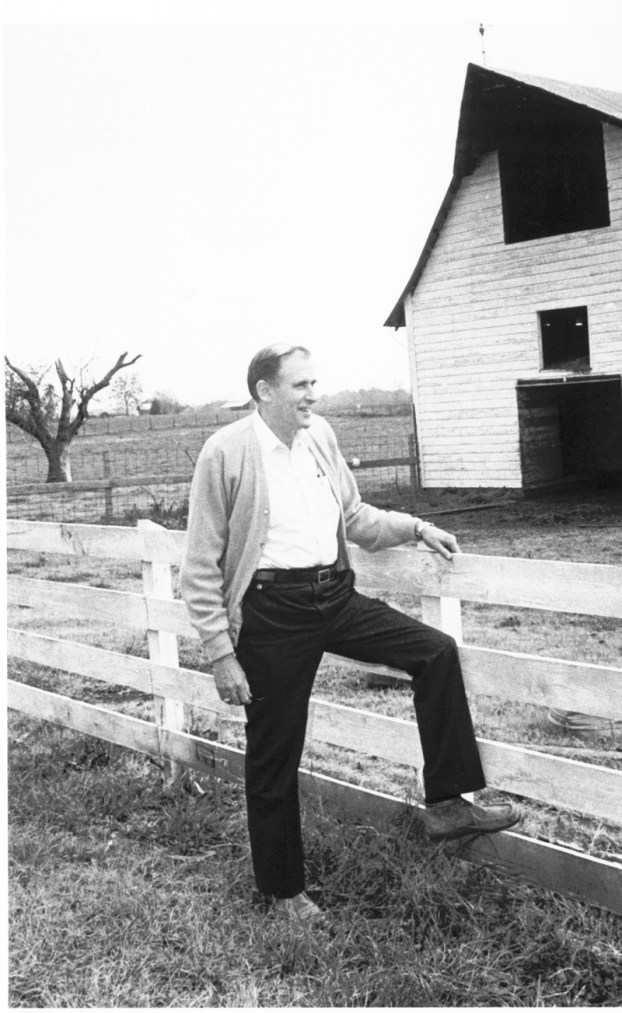 Hall Steele, photographed here on his Bear Poplar farm in 1986, served on the Rowan County Board of Commissioners from 1974 until 1986. Steele died on Christmas Day 2016.

Hall Steele: a man for all seasons

SALISBURY — This is not fair — and probably not even accurate — but whenever I looked at Hall Steele through the years, I thought of farming first.

It’s not fair, because Steele’s life encompassed much more than agricultural pursuits. It’s not accurate, because I’m not sure that Steele ever farmed much himself. He was too busy with other things, especially public service, yet he knew everything about farmers and farming thanks to running Steele Feed & Seed in Bear Poplar for 40 years.

When I sized up Steele, even though he might be wearing a nicely tailored suit and listening to discussions as a Rowan County commissioner, I saw a man standing tall and lean against a hot summer sun.

I pictured him taking off a wide-brimmed straw hat and wiping the sweat off the back of his neck before getting back to the field. As I said, there’s a good chance he never did much of that — he was more of a businessman, homespun promoter and public servant — but he always was a champion for farmers and Rowan County in general.

Steele died on Christmas Day, just shy of his 64th wedding anniversary with wife Roselind, who everybody knows as “Ronney.”

His death offered one more reminder that the kind of local politics Steele practiced — the conversations under shade trees, at the back of his store around the hot stove, in the line at church suppers and to groups gathered in the courthouse or under a park shelter — are long gone.

His kind of leadership style and commitment are things we don’t see much any longer. If you list some of Steele’s accomplishments, as obituaries are designed to do, you come up with a life well-lived. You question, too, why you haven’t attempted anything close to what Steele took on.

Terrorists, fake news and the Kardashians are hardly the biggest threats to our civilization. Losing people like Hall Steele is more worrisome to me. Call them part of a great generation or whatever, but you wonder from where their replacements will come.

In his work around Bear Poplar alone, Steele left a mark great enough for any man. He served in every kind of capacity and on every important committee at historic Thyatira Presbyterian Church.

He played a key role in chartering the Bear Poplar-Mount Ulla Fire Department, for which he was fire chief for 25 years. He headed the capital campaign for establishment of a West Rowan YMCA.

He was a founding member and president of the Mount Ulla Lions Club. Steele also saw the importance of promoting the Lazy 5 Ranch in Mount Ulla as a tourist attraction, which it surely is today.

He worked behind the scenes on farmland preservation and in establishing a Rowan County farmers market. Back in the 1970s, when nobody worried much about regular fish kills, threats of interbasin water transfers and all the things being discharged into the Yadkin River, Steele served as a founding member of the Yadkin River Association.

I like to think that association led to many other efforts in subsequent years to protect and clean up the Yadkin.

Steele held official positions in the Chamber of Commerce and served on a bank board, the advisory board of Rowan Tech and with organizations such as the Salvation Army and the Service Corps of Retired Executives.

But it might have been his work with the Rowan County Board of Commissioners from 1974-86 that left the most lasting impression. Steele’s obituary in Tuesday’s edition documented the board’s achievements during his dozen years on the board, including four as chairman.

Suffice it to say, the board’s work led to the Economic Development Commission, a new Rowan Public Library, establishment of the Rowan County Emergency Medical Service and the preservation of the 1909 federal courthouse, which is where county commissioners meet today.

Steele would be the first to tell you he was no saint. He had a temper at times and he battled heart trouble. He suffered a heart attack six days before the general election in 1986, a year he tried to unseat Republican Brad Ligon in the N.C. House.

A lot of people thought Steele had committed political suicide much earlier that year when he came out in favor of  a new county landfill site near Bear Poplar, where all his friends and customers were.

Steele could have easily avoided the controversy until after the election, but he thought the county couldn’t delay its responsibility in finding a new landfill property. Waiting six months would just put the county that much further behind schedule, he said.

The landfill ended up going elsewhere — off Campbell Road — but the damage to Steele had been done. He never stopped, however, having ideas and becoming consumed by his various projects.

I like to think Steele governed by conversation. He wasn’t much for formal speeches and tended to accomplish more by taking a draw on his pipe and networking with people outside of meeting rooms.

It probably goes back to the time his father’s store in Bear Poplar had a post office and a barber’s chair in back for farmers to get their shaves and haircuts.

I feel privileged to have sat in on some of Steele’s conversations, public and private.

Over recent years, Hall and Ronney had moved to the Oak Park retirement community, where I would see them on occasion. I also ran into Hall this past spring during a function at the Rowan Museum.

He called me over for a chat and, as always, he had a suggestion for a story. It was never about him and always about someone else.

I have a big regret. I visited Oak Park this summer to cover a chair volleyball “Olympics,” of all things. Ronney saw me in the lobby and invited me back to their unit to talk with Hall. I bowed out, knowing the photographer and I had to be somewhere else.

I should have made that visit. A conversation with Hall Steele was like loading your last bag of feed onto the truck, grabbing a bottle of Cheerwine from a bucket of ice and sitting in a rocking chair on the porch.

It was always worth it.