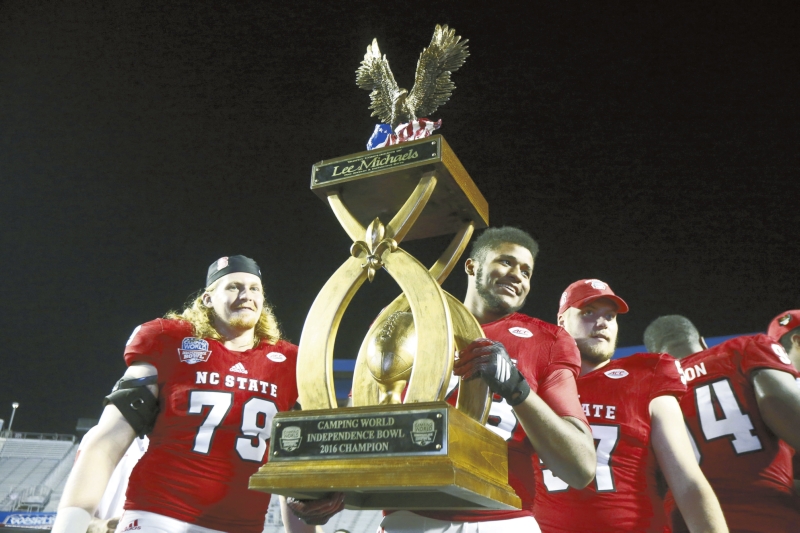 RALEIGH (AP) — North Carolina State went into the final two games flirting with a losing season amid questions about the future of coach Dave Doeren.

The Wolfpack closed the year with flurry: a road win against a rival; a statement of support for Doeren from the school’s athletic director; and now a bowl win. Doeren is hoping Monday’s Independence Bowl victory against Vanderbilt is a sign that his program has found some momentum and learned from a bumpy season.

“Like I told the team, there’s never been a championship football team that quit when things got tough,” Doeren said after the 41-17 win in Shreveport, Louisiana. “That’s not who we’re going to be. And because we went through this year, it’s going to make next year even better.”

There are plenty of returnees, though safety Josh Jones, the team’s leading tackler, announced Tuesday on Twitter that he would skip his final season and enter the NFL draft. Junior defensive end Bradley Chubb is also mentioned as a possibility to leave for the NFL.

But the Wolfpack had 27 freshmen or sophomores listed on the team’s depth chart for the bowl game.

Doeren entered the year hoping some changes would help the Wolfpack (7-6).

He replaced offensive coordinator Matt Canada with Boise State’s Eli Drinkwitz, and the team also brought in Boise State graduate transfer Ryan Finley to compete with Jalan McClendon to become starting quarterback. Finley won that job with his experience in Drinkwitz’s offense and avoiding turnovers and kept it all season, leading an offense that saw senior Matt Dayes become the team’s first 1,000-yard rusher since 2002.

The Wolfpack got off to a 4-1 start that included a memorable win against Notre Dame played in heavy wind and rain from Hurricane Matthew. They nearly went into a tailspin after blowing a huge win at then-No. 3 Clemson. Kyle Bambard’s missed 33-yard field goal sent the game into overtime in a 24-17 loss to the Tigers, starting a four-game swoon that included a home loss to a Boston College team with 12 straight Atlantic Coast Conference defeats.

“We had a couple of tough losses where we just didn’t finish games,” Doeren said. “The guys learned the hard way, sometimes you’ve got to go through that. . And the beauty of these guys is they hung together.”

The Wolfpack won at rival North Carolina in the regular-season finale to become bowl eligible for the third straight season. Athletic director Debbie Yow soon followed with a statement to “put to rest any speculation” and confirm Doeren would return for his fifth season.

The bowl win against Vanderbilt was the program’s first victory against a Southeastern Conference opponent since 1999.

“The real work starts now for us and for us to accomplish our goals next season,” said Finley, who has two more seasons of eligibility. “So this win is definitely a springboard into the spring for us.”