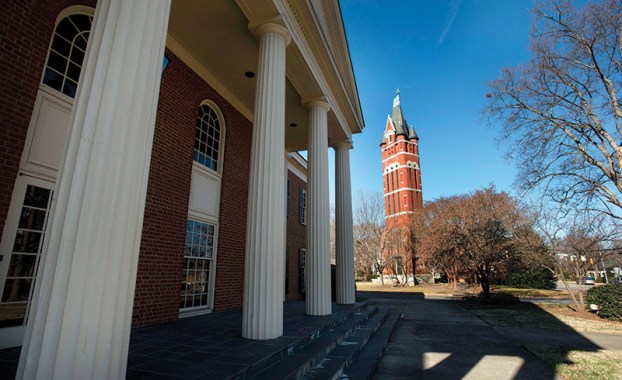 The old Presbyterian Bell Tower in the 200 block of West Innes Street has been reinforced and restored. Jon C. Lakey/Salisbury Post

Darts & laurels: Ready to ring in a new year

Shop with a Cop Laurels to the restoration and reinforcement of the Bell Tower in downtown Salisbury. Once part of an old First Presbyterian Church building, the tower survived the structure’s demolition in the early 1970s and went on to become an icon — a symbol of Salisbury. Pigeons and the elements took their toll, though. The structure deteriorated so much that in recent years its fate was in more jeopardy than most people realized. To the rescue came The Blanche and Julian Robertson Family Foundation and the more than 25 local families that joined the foundation in buying the tower and most of the 200 block of West Innes Street from the Maxwell Chambers Trust. A $94,340 revitalization grant from the N.C. Department of Commerce funded recent efforts to shore up the structure. After going silent for several years, the tower’s bell will ring in the new year again later this week. That’s worth celebrating.

Dart to the unpredictability of shopping trends, a challenge to retailers trying to survive in a rapidly changing marketplace. For good or ill, the Christmas holiday period is not quite the shopping boon it once was. According to the Retail Economist, November and December now account for less than 21 percent of annual retail sales at physical stores, down from a peak of more than 25 percent. Experts say consumers are spreading out their Christmas shopping earlier in the year, just as shoppers have moved away from doing all back-to-school shopping in August. This may not be a bad trend for retailers in the long run.

Laurels to law enforcement agencies that reach out to make children’s lives better, especially at Christmas. Shoppers in downtown Salisbury may have been alarmed last Thursday to see several patrol cars cruising down Innes Street with blue lights and sirens activated. That was Shop with a Cop in action, officers taking children to buy gifts for their families. Similarly, Salisbury Police partnered with Gerry Wood Auto Group for a 15th year of giving bicycles to children.  These efforts help families have a good holiday — and a good attitude toward officers.

Elizabeth Cook: ‘If that stranger only knew’

Christmas makes people do funny things — good things. Two women who have been touched by the  kindness of strangers... read more