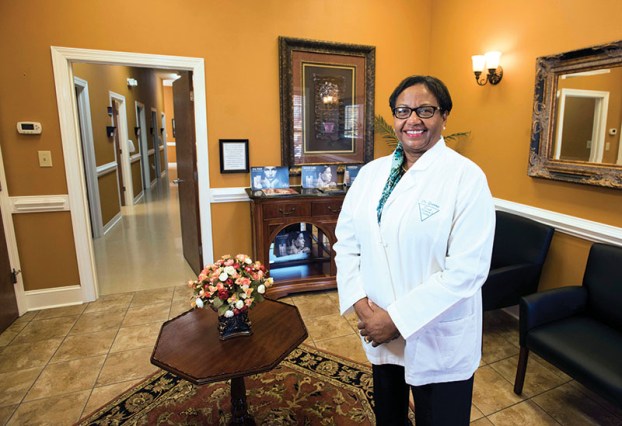 JON C. LAKEY / SALISBURY POST Dr. Eleanor Greene, who owns Triad Women's Health and Wellness Center in High Point, recently became the President of the North Carolina Medical Board. Growing up in the Hawkinstown area of Salisbury, Greene worked on the family farm as a child. Her mother encouraged to get an education because she did not think that her daughter would be happy as a farmers wife. Greene agreed worked hard toward a medical career. Wednesday, December 7, 2016, in Salisbury, N.C.

HIGH POINT – Eleanor Greene was always a good student. She grew up on a farm and never liked doing farm or house work, so when her mother told her to do well in school, she took it to heart.

“You know what my mother used to tell me? She said, ‘You need to get an education. You will not make a good farm wife,’” Greene said.

And she was right, not just because Greene would rather not work outside in the hot sun or iron clothes, but because she had a passion for another line of work – medicine.

After joining the North Carolina Medical Board in 2010, Eleanor Greene was sworn in as president of the board in November.

Greene grew up in Hawkinstown with parents Ralph and Pearl Wilson and four brothers and four sisters. Greene loved growing up in a big family and enjoyed the perks of being the second youngest child.

“I had privilege,” she said.

Greene had to perform certain chores on the farm, including picking vegetables. Her birth order privilege kept her from having to operate the tractor.

Greene said she did not like doing chores. Though her mother was good at ironing and sewing clothes, Greene never liked to do any of those things.

“The things (my mother) thought it was important for her daughter to know, I wasn’t interested,” Greene said with a laugh.

Even at a young age, Greene was interested in the human body. She had one of her brothers draw her pictures of the systems of the human body from his biology book for her.

“…He would have to draw pictures of the circulatory system and all the systems. I would just have him draw it for me so I would have my own. He was very artistic,” she said. “That really made me think I would be interested in doing something with health care and the body.”

She worked as a medical technologist for a while, but she was not satisfied with the work. With the encouragement of a friend, Greene went on to earn a medical degree and a master’s degree in public health in maternal and child health from the University of North Carolina at Chapel Hill.

Greene said she enjoyed all aspects of medicine, but she really liked taking care of women, delivering babies and surgery.

Obstetrics and gynecology was the perfect fit.

“I felt very comfortable in the OB/GYN rotation,” she said.

Growing up in Salisbury, Greene said she was embarrassed to go a gynecologist because most of them were men.

“I thought, you know, this is a field that only takes care of women. More women should be in this field,” she said.

Greene did find a gynecologist that she liked and told him of her concern about the field. He told her that she should solve that problem.

She practiced with different groups over the years and decided to start her own independent women’s center, the Triad Women’s Health & Wellness Center, to focus on wellness and outpatient appointments.

“I loved delivering babies, but it got tough in the middle of the night running out at three in the morning and never knowing what time you’re getting back. You don’t really have a lot of vacation because babies come any time and it’s usually the time you’re planning something with your family,” she said.

And, again, there weren’t many women in the field when Greene first started so if a family was lucky enough to get Greene, they wanted her all the way through the pregnancy and delivery.

Greene never practiced in Salisbury, mostly because she knew her mother would send friends and family to her and expect her to see them for free.

“And she still sent people up here,” she said with a laugh. “I knew she was going to do it.”

Her mother was always her biggest supporter. Greene felt that support and the support of all of her loved ones when she was installed as the North Carolina Medical Board’s new president.

“I don’t think before that happened I realized how much it truly did mean to me because I was very moved at the ceremony because I thought about where I have come from. I’ve come a long way through the grace of God and through very supportive family and friends and my husband…” she said.

Greene became the first African-American woman on the board when she was appointed in 2010 and served on the board’s disciplinary, executive, license and policy committees. She was previously the board’s secretary and treasurer and served as the president-elect.

Greene said it was an honor to even be on the board. There are medical or health-related boards that do not allow physicians, so Greene sees her position as a privilege.

“I would have to say of all of the things that I’ve done, and I’ve done a number of things…, being on the board is the most rewarding,” she said.

“She’ll be an asset to the medical board,” she said.

Patterson used the words caring, intelligent and giving to describe Greene. She said Greene invited her to stay with her while in Chapel Hill and Columbia, Ohio, for school.

“She’s just a wonderful person inside and out,” she said.

Trudy Cowan Neely echoed the same love for Greene. Neely and Greene are cousins and have been best friends even before first grade.

The only thing that got them in trouble in school was talking to each other too much.

“We always had something to tell each other,” Neely said, laughing.

Neely said Greene “has never changed over the years, even with all of her accomplishments.” Neely knows she can call Greene during good times and bad.

Neely could not even describe how happy she was for her friend when she learned that Greene became president of the board.

She currently serves on the editorial committee of the Federation of State Medical Boards.

Today, Greene is married and has three children, two daughters and a son. She sees patients three days a week at the Triad Women’s Health & Wellness Center.

She makes trips to Raleigh every month to take care of her duties as president of the Medical Board. Greene stays active in the community and is a patient advocate.

Greene likes to travel now that she has the time to do it. She takes yearly trips with her family, including a recent trip to Cuba.

At home, she and her husband are working on fixing up an old historic barn on their property. And since she has farming in her blood, she keeps up a small garden.

Greene said the field of medicine is dynamic and the profession is constantly changing. For the next generation of doctors, Greene advised embracing change and being as educated as possible.

She said if they go into the profession to help people and advance the field, they’ll be happy despite some of the negative things they could encounter.

“If you go in with a mind for service, then you’re going to be able to do that. You’ll find a way to do it in a way that’s acceptable to you,” she said.

Greene thanks God for his grace and favor in her life. She didn’t come from a wealthy family, but she was always happy and had family, friends and teachers who believed in her.

Spencer Board of Aldermen approves holiday bonuses for town employees

SPENCER – The Spencer Board of Aldermen approved giving holiday bonuses to town employees at a special called meeting on Wednesday.... read more