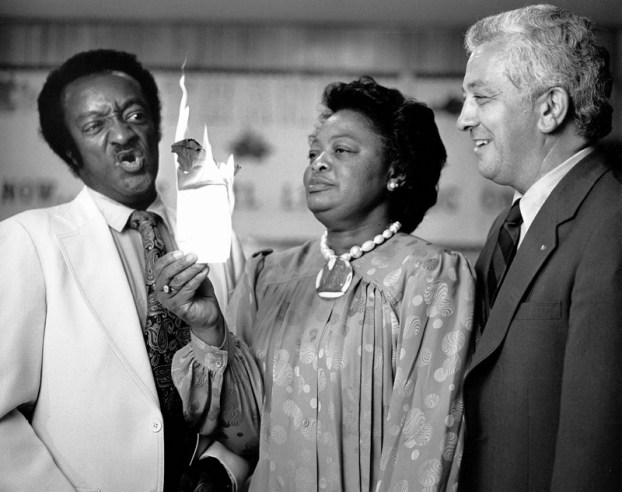 Submitted photo A photograph from the F&M archives of Cleveland Scheck, Catherine Krider and Paul Fisher at a celebration held at the new Oglesby Center in Granite Quarry. F&M Bank is continuing its support of the Oglesby Center by donating $12,000 for renovations.

GRANITE QUARRY — Paul Fisher and Catherine Krider stand on the front porch of the Geneva Oglesby Community Center in Granite Quarry, talking and laughing like old friends — which, of course, they are.

Fisher, chairman emeritus of F&M Bank, and Krider, who served as longtime president of the Granite Quarry Community Development Club, spent an afternoon together looking over recent refurbishments to the center.

Steve Fisher, current F&M Bank chairman and CEO, has a deep appreciation for the bank’s relationship and his father’s affinity with the White Rock community.

Steve Fisher and Krider recently had lunch to talk about the center. As a result of their meeting, the bank agreed to donate $12,000 for renovations to the Oglesby Center, which included new doors, new gutters, exterior painting, landscaping and repairs to the playground equipment.

Friends keep in touch, and the relationship between the bank and the community club stretches back for decades.

In the ’80s, Krider and other club members went to visit Fisher when he was bank president to secure funds to replace the original building which had been destroyed in a fire.

Club members were keen on paying off the $50,000 the bank loaned. Fisher admitted he was doubtful they could make the payments on a loan that size. But the women insisted they could, and had ambitious plans, the cornerstone of which was hosting weekly chicken-and-dumpling fundraisers.

After a few months, however, they were exhausted. They were worried. They couldn’t sleep at night.

“It was tiresome,” Krider said. “It was a burden.”

Defeated, they went to see Fisher about turning in the building. But he wasn’t ready to give up. Together, he and the women developed a plan.

First, Fisher asked Krider and the other two ladies present to give $500 apiece. They agreed. Fisher said the bank would contribute $5,000. He then called the Oglesby family, who agreed to contribute $5,000 as well.

Their next step: involve the community. There were about 30 large families in the White Rock neighborhood.

“My husband and I had talked about each family raising money,” Krider said.

The Kriders compiled a list of 26 families, with a plan to ask every family to contribute $1,000 each. The Kriders’ ingenious idea sparked a friendly competition among the families. Every family wanted to come up with their share of the money.

Eventually, Krider and her husband, the late Napoleon Krider, contributed another $2,000, as did Cleveland Scheck and his wife, Juanita. Scheck was vice president of the community club at that time.

Krider went back to the club captains and asked for another $250. Fisher called on friends and business owners in Granite Quarry and altogether, these efforts paid off.

A total of $50,000 had been raised in 90 days — a miracle had happened. That miracle was attributed to a total community effort, everyone doing what they could.

There’s a photograph in the F&M archives of Krider at a celebration held in the new, debt-free center. She’s holding the burning bank note, flanked by Scheck and Fisher, and Scheck is yelling in delight.

“Mr. Scheck said I almost burned him,” Krider said, grinning at the memory. “It was wonderful. We were just so happy, we didn’t know what to do. We wanted a place for our youth to come.”

For years, the center did just that, serving as a community gathering place for its youth.

F&M later installed a playground, with a nearby outdoor picnic area. For a number of years, the Oglesby Center was also a senior citizens meal site, until the program moved to Rockwell three years ago.

The center was named for the late Geneva Oglesby, an active member of the White Rock community who taught at Shuford Elementary School.

“She was one of those people who was always looking out for the youth,” Krider said. “She was a special lady.”

Nowadays, the Oglesby Center is available for rental for birthday parties, wedding receptions and other social functions to anyone in the community.

It’s used by black, white and Hispanic residents, Krider said. “We have a police presence at every event to make sure everyone stays safe, and we have someone who takes care of the building rentals and cleans afterward. We are self-sustaining.”

And yes, they still have chicken-and-dumpling fundraisers occasionally.

Another constant that’s remained over the years is F&M’s relationship with the community.

There was a time, Fisher and Krider both remember, that folks could go to the bank, get a $100 loan and pay it off. As a matter of fact, that’s how many families helped pay off the community center’s loan all those years ago.

“F&M is a community outreach for people,” Krider said. “This bank has been good to the community. You just don’t find banks like F&M. It’s been a wonderful relationship.”

F&M has carried that relationship to the next generation.

1. For two consecutive evenings, last Monday and Tuesday, power was out over large sections of Salisbury while Duke Energy... read more