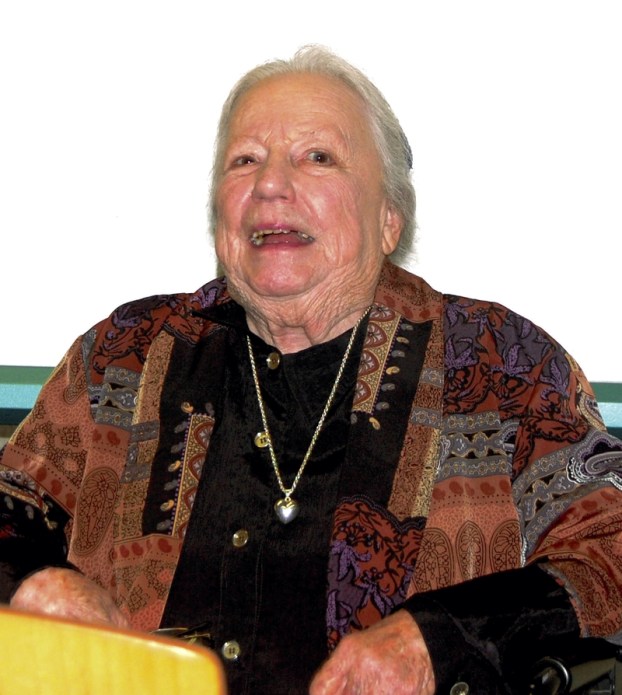 Dot Jackson’s wonderful smile and mischievous mutterings are gone. Sadly, the former journalist and one-time author died Dec. 11 at her daughter’s home in Newland. She was the very young age of 84.

Dot came up in journalism in the days when journalists were often crusaders for a cause, when the drive to expose wrongdoing fed reporters for long days and nights.

Her series of columns in the Charlotte Observer in the1970s kept the precious New River up in Ashe County from being dammed and helped the river earn a federal designation as a Wild and Scenic River.

Former colleague Frey Gaillard described her perfectly: “She had a heart the size of a school bus.” That she did and she had passion and she wasn’t afraid of anyone or anything.

I did not know her in her heyday at the Observer, though I always read her columns.

I got to know her when she finally published her one and only novel, “Refuge” in 2006, when it won the Novello Prize, then sponsored by Novello Festival Press of the Charlotte-Mecklenburg Public Library (sadly, now defunct).

That one beautiful book developed over decades. She had the family story that provided the bones of the book, but no one would let her tell it — too scandalous! No one would ever respect them again.

Then, when certain people passed on, Dot felt free to write it down, and found out the big family secret was known to the big family. Nevertheless, the manuscript was sort of like a breach baby. Delivery was difficult, and the manuscript disappeared once, was resurrected, languished in a refrigerator for a time and was finally, finally published.

“Refuge,” set in Charleston in the late 1920s, was the story of the amazing Mary Seneca Steele and her bizarre family, her completely loony husband and her true love, the Blue Ridge Mountains and a cousin who inhabited them.

The book won the 2006 Weatherford Award and the Appalachian Book of the Year Award. It captivated so many people, other Carolina writers, a slew of new fans. It was a love story and an elegy to the ways of mountain life. Mary Seneca was an unforgettable character with a huge heart, much like her creator. She was tough and determined and had to fight for any happiness she could grab, like her creator.

I did a few stories about Dot and her book, and we became fast friends, She had known Rose Post for ages. Rose worked at the Post for 56 years. They just don’t make ‘em like Rose and Dot.

Dot did very little moaning, though. Mostly she laughed. She poked fun at herself and her industry, she laughed off boorish behavior and thick-skulled, higher-up mucky mucks who really didn’t know what it was like in the trenches.

Dot could charm anyone into telling her anything. She had the gift of listening as if you were the most important person in the world.

Her eyes would sparkle while you talked, and she would laugh at all the right places. She loved a good story. She loved the mountains and she loved the cherished old folk ways, the ones she grew up with.

When she retired, she moved to Six Mile, S.C., very near where she grew up, and helped start the Birchwood Center for the Arts and Folklife.

She described the rattletrap trailer she lived in nearby and loved — she had heat, running water and a working stove. A bear would sometimes make a winter home under the trailer, but they got along.

The way she put words together was so fine, so descriptive, like when she was starting work on “Refuge” in a haunted house she lived in in Charlotte, “Oblivious, I worked on an aged, skeletal typewriter, in a basement dark as a leaking tomb, amid swarms of hopping cave-crickets and a daddy longlegs army.”

Dot was determined, smart, curious, above all, curious. That’s a priceless asset to a reporter or an author.

And, oh, could she tell a story. She knew how to get you hooked, how to lead you through and throw a powerful punch at the end.

Dearest Dot. People who met her were instantly embraced by her smile, her giggle, her curious eyes.

Those are the things I will hold onto in memory, and celebrate her as a pioneering journalist, a down-home storyteller and a wise woman, indeed.

By Jennifer Nicholson Rowan Public Library This is my favorite time of year, with decorations, peppermint and cinnamon filling the... read more