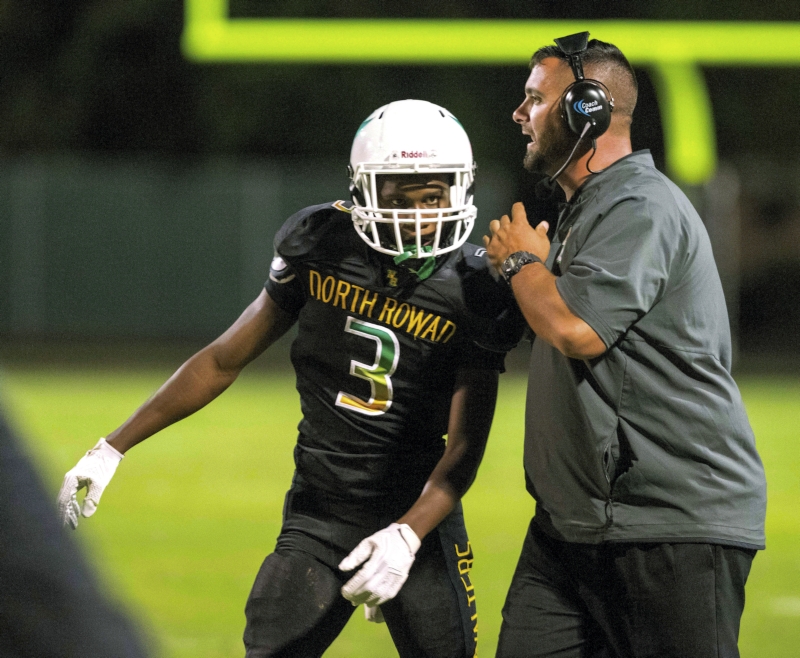 SALISBURY — North Rowan football made a quantum leap from 5-7 to 11-3, so second-year head coach Ben Hampton wasn’t a hard choice as Rowan County Coach of the Year.
“Well, we had most of our coaching staff coming back and we had a lot of talent coming back,” Hampton said. “The players worked from the time last season ended and we expected to have a pretty good team.”
The Cavaliers were better than pretty good. They made a six-win jump this season. That’s tied for the second-best upward move in one year in school history. North jumped eight wins from 1981 (3-7) to 1982 (11-1). North’s only other six-win jump came from 1991 (6-4) to 1992 (12-3), a season in which the Cavaliers played in the 3A state championship game.
The only other county team with a winning record this season was West Rowan, and the Falcons weren’t making a comeback. They basically held their ground with their second straight 10-4 season under coach Joe Nixon.
North, the Central Carolina Conference champs, beat four teams in 2016 that it lost to in 2015 — Carson, Statesville, West Stokes and CCC rival Thomasville.
After losing in the first round of the postseason in 2015, North took two 2A playoff games this season, including a road victory at Brevard in the second round that was bigger than the Cavaliers probably realized. North had not been able to win a road playoff game since the 2001 season when it edged West Wilkes, 30-29.
What changed?
“Maturity was a big part of it and we had a lot of really good seniors leading us,” Hampton said. “Their maturity showed on the field. We’d get down, but instead of panicking, we were able to execute and make some comebacks.”
North’s turnaround season began on opening night. Down 14-10 against East Rowan in the third quarter and with momentum in East’s corner, the Cavaliers stuck together and won, 28-14. That resilient victory helped them go 3-0 in county games.
The most improved area for the Cavaliers was the offensive line where Terry Cathcart, a former defensive player, and Will Anthony, who didn’t play at all in 2015, were key additions.
Senior QB Corbin Smith jumped from throwing for 765 yards and rushing for minus yards as a junior to throwing for 1,882 yards and being an effective runner as a senior. He provided more than 2,000 yards of offense.
“You’ve got to start with that o-line and our quarterback play when you talk about how much we improved,” Hampton said. “We were able to run the ball behind the big guys, and Corbin dropped back to throw it 260 times and only got sacked nine times.”
North’s season ended with a competitive third-round loss to Reidsville, which rolled on to win a state title, but it was quite a ride for Hampton and the Cavaliers.
In high school, Hampton was a strong baseball and football player at West Rowan before moving on to play fullback for Coastal Carolina.
His records have been broken since he set them, but he put up quite a few West and county marks as a senior in 2001 by rushing for 1,628 yards and 18 touchdowns. In his prep career, he ran for 31 touchdowns, threw four touchdown passes and made seven touchdown receptions. He was a big part of West’s first-ever conference champion team in 2000.
Hampton didn’t receive any county player of the year accolades, mostly because North Rowan had Alfonzo Miller in those days, but now, 15 years later, Hampton is recognized as Rowan County Coach of the Year.