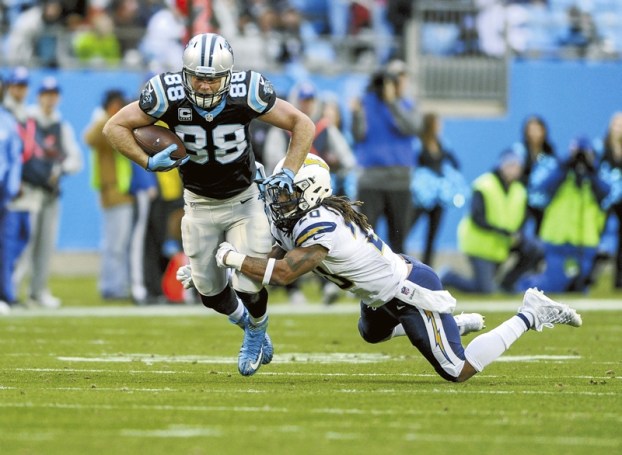 Panthers don’t want Falcons to clinch division on their field

CHARLOTTE (AP) — Matt Ryan and the Atlanta Falcons knew coming into the season that the road to the NFC South championship would go through Carolina.

The Falcons (9-5) can capture the division their first division title since 2012 on Saturday with a win over the three-time defending NFC South champion Panthers on their home field, combined with a Tampa Bay loss or tie against New Orleans.

Falcons coach Dan Quinn said his team is expecting a battle, even though Carolina (6-8) is all but eliminated from playoff contention.

“That’s what you look for in a division game,” Quinn said. “That’s what makes them so much fun — the toughness, the hardness that comes with it.”

The Panthers would love nothing more than to play spoiler against the Falcons, a team that ended Carolina’s unbeaten season last December in Week 16 at the Georgia Dome.

But to do so, Carolina will need to stop Ryan.

The MVP candidate threw for 503 yards and four touchdowns in a 48-33 win over Carolina earlier this season. It was the most yards passing ever surrendered by the Panthers, prompting defensive coordinator Sean McDermott to say of the plane ride home, “Honestly? I wanted to open a window and jump.”

Carolina’s defense has been much improved in recent weeks, and safety Kurt Coleman is expecting a better performance this time around.

“Our confidence is much higher than it was the last time we played them,” Coleman said. “We have to get pressure on Matt Ryan and we have to be able to lock up on defense and make plays when we are in the area.”

Jones caught passes for 22, 14 and 15 yards on Atlanta’s first three plays and had a 75-yard touchdown catch in his memorable day.

Although the Panthers may not have a cornerback who can stick with Jones, it will be difficult for him to repeat his big day if he is able to play. Jones ran full-speed for the first time on Wednesday and likely won’t be 100 percent.

“It was important to sit out those two games and heal up like I needed to heal up,” Jones said.

MVP TALK: Jones and running back Devonta Freeman have endorsed Ryan for MVP this week. Freeman ran for three touchdowns in last week’s rout of the 49ers and was named NFC offensive player of the week.

Jones said he has been impressed by watching Ryan from the sideline the last two weeks.

“Matt does great things. I was a fan,” Jones said. “When you’re watching live action, you see the coverage and everything. You watch him as he goes through it — boom, boom, boom. It’s unbelievable. He’s been doing a great job for us.”

Olsen, who is expected to play despite a shoulder injury that has kept him out of practice this week, said he would take great pride in breaking the mark because it speaks to his durability and consistency.

TO PLAY OR NOT TO PLAY: Panthers three-time All-Pro middle linebacker Luke Kuechly has cleared the concussion protocol, but coach Ron Rivera seems reluctant to play him again this season with the team all but mathematically out of the playoff hunt.

Cam Newton, for one, thinks resting Kuechly is a good idea.

“Luke is a person that could potentially be the greatest linebacker that has ever played — straight up,” Newton said. “I don’t think, for me, I would want to jeopardize that for a long, long-term issue just to bring him back. The long-term goal for this team is to be in the playoffs and play for Super Bowls.”

JOHNSON’S RETURN: The Panthers have rediscovered their pass rush in the second half of the season and are tied for the league lead in sacks with Denver.

Carolina is expected to get defensive end Charles Johnson back for this game after he missed the last two with a hamstring injury. The 30-year-old Johnson is a Georgia native who always seems to step up his game against the Falcons.