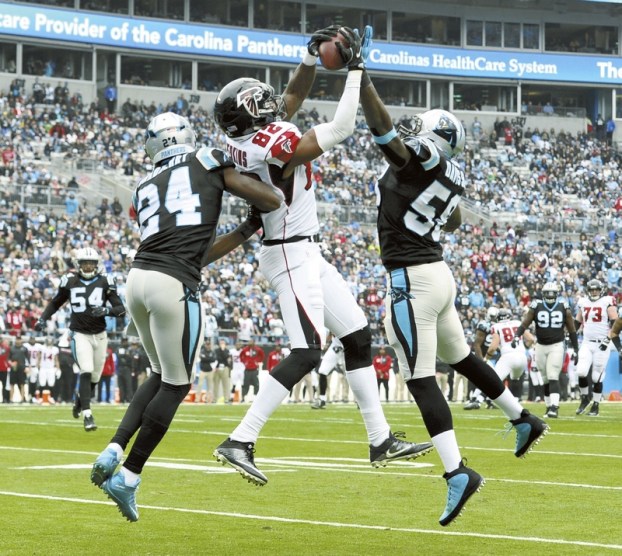 CHARLOTTE (AP) — A raucous cheer erupted from behind the closed doors of the Atlanta Falcons’ locker room Saturday.

The Falcons didn’t officially have anything to celebrate in public yet — other than sweeping the three-time defending NFC South champion Carolina Panthers — but they know they’re close.

Matt Ryan threw for 277 yards and two touchdowns, Tevin Coleman had 135 yards from scrimmage, including a pivotal 55-yard fourth-quarter TD run, and the Falcons moved a step closer to wrapping up a postseason berth with a 33-16 win over the Panthers.

“This is a tough place to win,” Ryan said. “I know that. I’ve been playing here for a long time. They’re always well prepared and play really, really hard, so it was a good win for us.”

The Falcons (10-5) can earn their first NFC South title since 2012 if Tampa Bay loses or ties New Orleans on Saturday. If the Bucs win, Atlanta can still clinch a playoff berth with a Detroit loss or tie against Dallas on Monday night.

“Coming into (training) camp we wanted the division,” Falcons safety Keanu Neal said. “As long as you own the division, you control your own destiny.”

A few straggling Falcons fans chanted “MVP!” at Ryan in the game’s closing minutes while most Panthers fans had already headed for the exits.

The Panthers (6-9) were officially eliminated from playoff contention after making the Super Bowl last season.

Ryan torched the Panthers for the second time this season. He threw for 503 yards and four TDs in Atlanta’s Week 4 win over Carolina at the Georgia Dome, a victory that set the stage for the Falcons’ playoff push.

The Panthers had battled back to cut Atlanta’s lead to 10 and had Ryan backed up to his own 14 on third-and-21. But he calmly completed a 31-yard swing pass in the left flat to Tevin Coleman, who raced past Thomas Davis for a 31-yard gain. On the next play, Coleman broke through a big hole up front and raced 55 yards for a touchdown, essentially sealing the win.

Ryan spread the ball around effectively, throwing touchdown passes to backup tight ends Joshua Perkins and D.J. Tialavea, who was signed from the practice squad earlier in the week. In so doing, Ryan set the NFL single-season record by completing TD passes to 13 different receivers.

Cam Newton, last year’s league MVP, struggled with accuracy throughout the day, completing 18 of 43 passes for 198 yards with two interceptions. His only highlight came on a 26-yard touchdown pass to Kelvin Benjamin in the back of the end zone on the final play of the third quarter.

“Me personally, I have to find completions,” said Newton, who has completed less than 50 percent of his passes in five of the last six games.

He refused to blame his lingering shoulder injury for his struggles.

“My production hasn’t been solid and I can’t point to something and say this is the reason,” Newton said.

Ryan broke his own franchise record with his 33rd TD pass of the season when he fired a dart to Perkins in between double coverage for a 26-yard first-quarter score.

Carolina’s Greg Olsen has become the first tight end in NFL history to record three consecutive 1,000-yard seasons. Olsen did it with a 17-yard reception from Newton in the second quarter.

Down 17 and facing a crucial third-down situation with 10 minutes to go, the Panthers left their top two receivers Benjamin and Olsen on the sideline and inserted backup quarterback Joe Webb for the injured Devin Funchess (knee). Newton threw to Webb near the goal line and he couldn’t handle the pass, forcing the Panthers to settle for a third Graham Gano field goal.