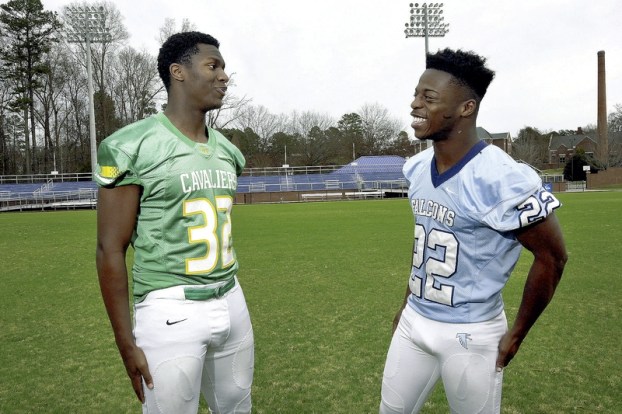 SALISBURY — North Rowan defensive end Zion DeBose is one of those rangy athletes coveted by Division I football programs.
His recruiting decision may not be known until National Signing Day on Feb. 1. He has offers from numerous in-state schools, but he recently visited Missouri and he also has trips lined up next month to distant locales such as Western Michigan, Pittsburgh and Rutgers. Reportedly, Virginia Tech has already made DeBose an offer.
West Rowan linebacker Lawrence “L.J.” Robinson is drawing significant recruiting interest of his own, but the fervor isn’t as hot as it is for DeBose because Robinson is at least three inches shorter and at least 20 pounds lighter than the 6-foot-3, 225-pound DeBose, who looks like he just stepped off a poster. DeBose looks like one of those “few good men” the Marines are seeking.
Still, as far as their body of work as high school seniors, it was extremely difficult to separate the two studs.
It’s hard to imagine anyone in the state was a better linebacker than Robinson, who averaged an insane 16 tackles per game. Yes, West Rowan’s defense is designed for Robinson to make tackles, but 16 per night is crazy. West played 14 games. Doing the math, that’s 224 tackles.
It’s also hard to imagine anyone could have been a more dominant defensive end than DeBose, who had 20.5 sacks. North coach Ben Hampton said nearly half of DeBose’s 100 tackles were behind the line of scrimmage, and that’s scary to think about. He left a trail of bruised torsos and twisted limbs wherever he went.
Robinson was the South Piedmont Conference Defensive Player of the Year, while DeBose was the Central Carolina Conference Defensive Player of the Year for the second time.
The Post’s decision was to make them co-players of the year. Both seemed satisfied with that ruling. So did Hampton and Robinson’s coach, Joe Nixon.
It’s the fifth time since 1968 the Post has named county co-players of the year for defense. The most recent occasion was in 2008 when West’s Chris Smith — the former Arkansas Razorback and current Jacksonville Jaguar — shared the honor with Salisbury linebacker Pierre Jimenez.
DeBose was a major reason North Rowan improved from 5-7 to 11-3, went unbeaten in the CCC, and won its first playoff road game in 15 years.
“We expected really big things from Zion and he delivered them,” Hampton said. “He played at a high level consistently as a senior. With his size, with his wingspan, with the get-off that he has, he’s basically unblockable. He’s got big dreams and he’s good enough to achieve them.”
DeBose had three sacks and 15 tackles against Davie County, one of the state’s toughest teams.
He had 11 tackles and 2.5 sacks in the physical CCC victory against Thomasville.
In North Rowan’s playoff victory at Brevard in the second round, he contributed 3.5 sacks.
“My sophomore year I was basically just a pass-rusher,” DeBose said. “I worked extremely hard as a junior to get better against the run and I had 33 tackles for loss, a pretty good season. As a senior, I was able to put the pass-rushing and run-stopping together.”
DeBose is athletically impressive, with the speed and instincts to match his towering frame.
“I learned a lot before this season about how to combine my speed with power,” DeBose said. “This year I was bigger and stronger and I had more knowledge. I was able to hold up the opposing linemen, and then I found the football. I helped my team have more success, and I very proud of the year our team had.”
While he made the All-SPC team as a junior, Robinson was second team all-county. He didn’t sulk about it.
“I thought it was a mistake, but I used it as motivation for my senior season,” he said. “I played my hardest every night. I found the football, and I made a lot of tackles.”
There also were two humongous, season-changing pick-sixes by Robinson. Both turned league games around. One triggered a victory against the SPC champion Robinson Bulldogs. The other came with West Rowan trailing Central Cabarrus. 14-7, and with Central driving for another score.
Robinson, a former running back who was shifted to linebacker as a sophomore, still has the speed to go all the way anytime he gets the ball in hands.
Robinson cites the Mooresville and Crest games as his two favorite wins of the year.
“Because emotions were running very high in those two,” Robinson said. “Great team wins.”
Robinson has a lot of savvy to augment his fine wheels, and like DeBose, he’s a good student. He should have a fine college career ahead of him for a fortunate school.
“He was very productive and very consistent,” Nixon said. “He can run and he knows how to get to the football. He was a great leader for us, and we don’t win 10 games without him.”