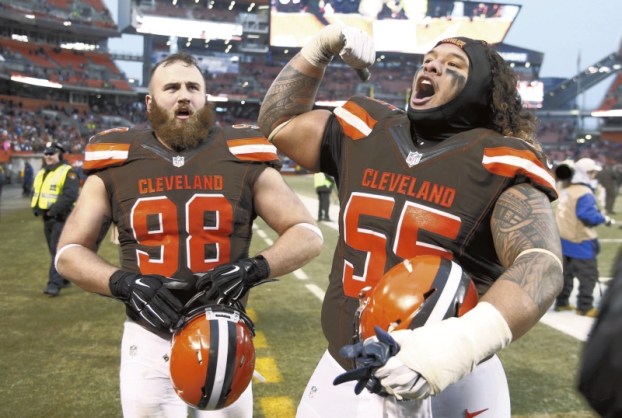 CLEVELAND (AP) — On the verge of infamy and more embarrassment, the Browns triumphed.

Two losses from an imperfect season, the Browns survived a last-second field goal attempt and got their first victory of the season after 14 losses on Saturday by beating the San Diego Chargers 20-17.

When the kick sailed right, Cleveland’s small crowd erupted in celebration and Browns players poured off their sideline as if they had just won the Super Bowl. Several players dropped to the turf in disbelief and relief.

The Browns avoided becoming the second team to go 0-15, and no longer have to worry about joining the 2008 Detroit Lions as the only teams to lose all 16 games.

Cleveland built 10-point lead in the third quarter and hung on — defensive tackle Jamie Meder blocked a potential tying field goal with 3:49 left — to give coach Hue Jackson his first win with the Browns.

The Chargers (5-10) lost their fourth straight and one that could sting for a while.

It took everything the Browns had, and some help from the Chargers, for Cleveland to finally come away with a victory following weeks of injuries and losses.

Quarterback Robert Griffin III sustained a concussion in the fourth quarter, focing Jackson to bring in rookie Cody Kessler for the final 10 minutes.

Isaiah Crowell had two touchdown runs for the Browns, who couldn’t come up with a clinching first down. They punted the ball back to San Diego and Philip Rivers with 1:46 left.

Without any timeouts, Rivers, who threw for two touchdowns and 322 yards, converted on fourth down by hitting Antonio Gates. He drove the Chargers to Cleveland’s 28 with 28 seconds left.

But unable to stop the clock, the Chargers had to rush their field goal unit out. The normally reliable Lambo pushed his kick right.

The Chargers had nine sacks, but hurt themselves with nine penalties for 92 yards.

Not accustomed to having the lead at any point, the Browns extended theirs to 20-10 in the third quarter on Cody Parkey’s 27-yard field goal. But the Chargers finally found some offensive rhythm and responded with an 11-play, 75-yard drive, Rivers connecting with Tyrell Williams from the 1.

Both teams sustained multiple injuries, with Griffin and Browns cornerback Joe Haden the most significant players to go down. A Pro Bowl alternate, Haden, who was already playing with two groin injuries, hurt his neck in the third quarter and did not return.

San Diego linebacker Denzel Perryman sustained a leg injury in the fourth quarter and was taken from the field on a cart.

There was a scary moment in the first quarter when Perryman and safety Jahleel Addae collided.

Perryman was attempting to tackle running back Duke Johnson but missed and instead walloped Addae with his helmet. The crowd gasped at the violent impact and both players were dazed and required medical attention.

Addae took the worst of the blow and spent several minutes on the field before being helped up and walking off under his own power. He returned in the second quarter.