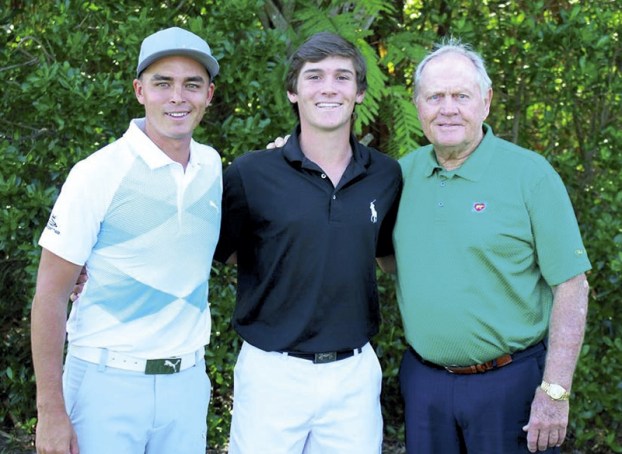 Facebook photo ... Local golfer Michael Childress, center, as part of a fund-raising event that he has been involved in, was one of eight young golfers who were recently recognized in Jupiter, Fla. There, Childress spent time with Hall of Famer Jack Nicklaus, right, at The Bear’s Club. Current PGA star Ricky Fowler, left, was also present and practiced with Childress and the others.

JUPITER, Fla. — The American Junior Golf Association partnered with Rickie Fowler and Jack and Barbara Nicklaus to celebrate the top 2016 fundraisers for Leadership Links at The Bear’s Club in November.

Michael Childress, of Salisbury, was among those recognized, one of eight young golfers who got to spend time with Hall of Famer Nicklaus. Fowler, one of the top young stars on the PGA Tour, had a session with Childress on the practice range and played a hole with him.

Since 2009, Leadership Links has helped more than 2,000 junior golfers make a difference in their community by generating more than $1.5 million dollars in charitable donations to charities and the AJGA’s Achieving Competitive Excellence (ACE) Grant program. Leadership Links helps develop young men and women by teaching charitable giving skills and service-oriented practices at an early age.

Childress, one of the top junior golfers in the area, raised over $10,000, three-fourths of which went to Rowan Helping Ministries and the remainder went to Nicklaus’ Children’s Health Care Foundation.

“This is probably our most special donation this year,” Barbara Nicklaus said in the Q&A session. “To know that giving back is in your young vocabularies is truly special to us.”

The top fundraisers in Leadership Links also received gifts from Fowler and played a round of golf with him at The Bear’s Club. Audrey Pulliam of Little Rock, Ark., raised the most money for a non-golf charity, the First Baptist Church of Little Rock, funding the building of a church in the Dominican Republic with $20,060. Haley Bookholdt of Columbus, N.J., was the top fundraiser for a junior golf charity, the First Tee of Greater Trenton, with $12,475.

“It’s a great stepping stone to these kids continuing to do charity work down the road,” Fowler said. “There’s a lot of giving in the game of golf. I don’t think any sport really rivals us on the amount of money we are able to raise and donate. So Leadership Links is definitely a great way to start.”

Childress raised funds by birdies made during selected junior tournaments during the spring and summer.

“This experience has been unbelievable,” Childress said. “For someone else to benefit, it just feels better than making a birdie for a score. I’m doing something that I love and it’s helping others who are less fortunate.”

Childress, 17, a junior at Cannon School in Concord, is in the process of visiting colleges and wants to make a decision soon on his destination for the fall of 2018. Childress hopes to decide between Wake Forest, Virginia, Elon and several others.

And as for the trip to The Bear’s Club, Childress said that spending 30 minutes with Jack Nicklaus was “an amazing experience, one that I’ll never forget.”

The families of all of the junior golfers also got to attend the day at The Bear’s Club.