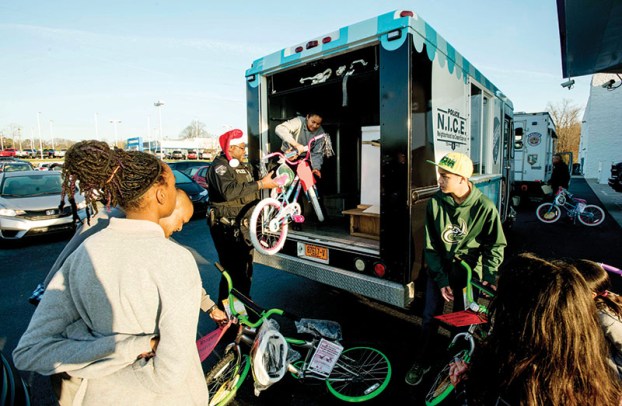 SALISBURY — Moussa Diomande had no idea how he could fulfill his children’s Christmas wish, but because he filled out an application, their wish was granted. The children wanted bicycles, but the father of five said there was no way he could provide enough bikes for them all. He went to the Salisbury Police Department and completed an application for their annual bike giveaway.

The giveaway is a collaboration between the police and Gerry Wood Auto Group and is in its 15th year. The car dealership donates the money that’s used to purchase the bikes and the police department processes the applications. The officers, police staff, cadets, and even their families volunteer to deliver the bicycles to each family.

This year, said Brenda Wood, Walmart contributed $10 toward each bicycle.

“It’s wonderful community support,” she said of the annual giveaway.

This year, organizers were able to give 140 bicycles to Salisbury children, 150 teddy bears to children too young for bikes and 4,000 candy canes for each family.

“I couldn’t afford them for all the kids,” Diomande said.

The family, who is originally from Africa, moved here from New York four months ago. The children range in age from 10 to nine months old.

Diomande said he was very happy and this was something wonderful for his children.

The children, most of whom were still asleep, were excited to receive the bicycles.

Mantouone, 9, said she loved her bike and could be seen playing with the ribbons that hung from the handles with a big smile on her face.

Yolanda Huerta said four children, including her nieces and nephew, wouldn’t have been able to get the bicycles had it not been for the police and the car dealership.

Huerta’s hours at work had been cut back to just one to two days a week and she just couldn’t afford the bikes.

“It’s awesome. It gives the kids something. We are not able to buy all of them,” she said.

“I appreciate all of the help. Every little bit counts,” she said.

Just a few doors down from the Huertas were Cassandra Walker and her children.

Walker said she was just so happy that the children were able to receive the bikes for Christmas.

“It means a lot. That’s all they wanted,” she said.

One of her daughter’s had never had a bicycle before.

Walker asked the little girl if she was sure she knew how to ride, but within an instant the girl was slowly pedaling around the yard.

The stay-at-home mom said she gave birth to a boy not too long ago and he died shortly after. She said emotionally and physically she just wasn’t able to return to work yet. She had no money to buy her children what they so desired this year.

“I’m greatly appreciative. You made it a merry Christmas,” she told the officers and their children who volunteered to deliver the bikes.

She made sure each child thanked the officers and volunteers and extended hugs to them as well.

Walker said she’ll let the children ride their bikes for the day and then if they wanted to gather them around the Christmas tree just before the holiday then she would let them.

One volunteer, Ramiah Rooplal, 11, said she thought it was a really good thing to give bikes to children in need.

“I’m excited,” she said of getting to deliver the bikes.

She said her father, a Salisbury officer, told her and her siblings about the event and they wanted to help.

Ramiah’s sister, Ryah, 7, said today was perfect and she was excited as well. The girls’ older brother, Rylen, 13, said he volunteered because he “felt like it was the right thing to do.”

This was the first time the Rooplals volunteered to help deliver bicycles.

Shaneia Deberry, 13, another first-time volunteer, is a police cadet and said she thought the giveaway was “really cool.”

Deberry joined the cadets this year after seeing her older sister participate.

She wanted to learn more about the program. Many of the police cadets volunteer each year to help distribute the bicycles.

By Amanda Raymond amanda.raymond@salisburypost.com SALISBURY – The Salvation Army kettle at Old Navy had more than a bell to draw... read more