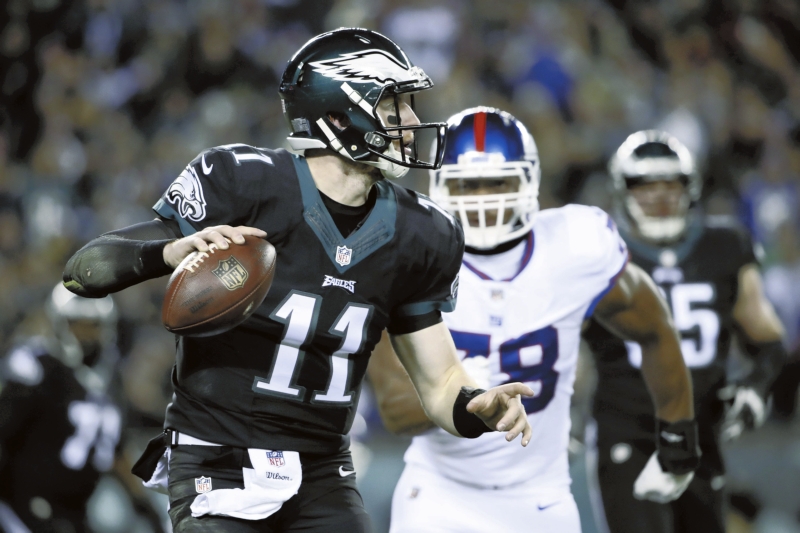 Philadelphia Eagles' Carson Wentz looks to pass during the first half of an NFL football game against the New York Giants, Thursday, Dec. 22, 2016, in Philadelphia. (AP Photo/Matt Rourke)

PHILADELPHIA (AP) — The New York Giants will have to wait a while to make the playoffs.

Malcolm Jenkins had the second two-interception game of his eight-year career, returning one for a touchdown, and the Philadelphia Eagles snapped a five-game slide by beating the Giants 24-19 on Thursday night. The loss handed Dallas the NFC East title — and home-field advantage throughout the conference playoffs.

It also put the Giants (10-5) in a more difficult spot for ending their four-season playoff drought. They still own the top wild-card position heading into their finale at Washington.

New York can still get in this weekend if Detroit, Green Bay, Tampa Bay or Atlanta loses.

Carson Wentz threw a touchdown pass to Nelson Agholor, then returned from being examined for a concussion in the fourth quarter to guide a drive to Caleb Sturgis’ 41-yard field goal. After New York’s Robbie Gould made his fourth field goal, Philadelphia (5-9) held on downs with just under two minutes remaining.

The Giants got the ball back with 1:31 left and Terrence Brooks intercepted to clinch it with 5 seconds to go.

Eli Manning was inconsistent with his throws all night. On Jenkins’ second interception, the throw was woefully short.

Right tackle Lane Johnson’s return from a 10-game suspension paid dividends immediately. Twice Johnson wiped out the left side of New York’s defensive line, with his block helping spring Darren Sproles for a 25-yard touchdown run for a 7-0 lead.

It was 14-0 1:28 later when Manning’s short pass to Will Tye was way too soft. Jenkins cut in front of the tight end, then romped down the right side for a 34-yard score.

It was that way all night.

Manning finally found his touch on the last drive of the half, with a gorgeous 29-yard connection to Victor Cruz keying an 84-yard mark. Shepard slipped past Jenkins’ bump at the line to score from 13 yards for a 21-13 deficit.

It was all field goals in the second half — and some more imprecise throws by Manning.

Agholor, the Eagles’ first-round draft pick last year who had only 57 catches in 26 career games, scored his first touchdown this season and third of his career with the 40-yarder in the second period. He had not reached the end zone since the season opener.