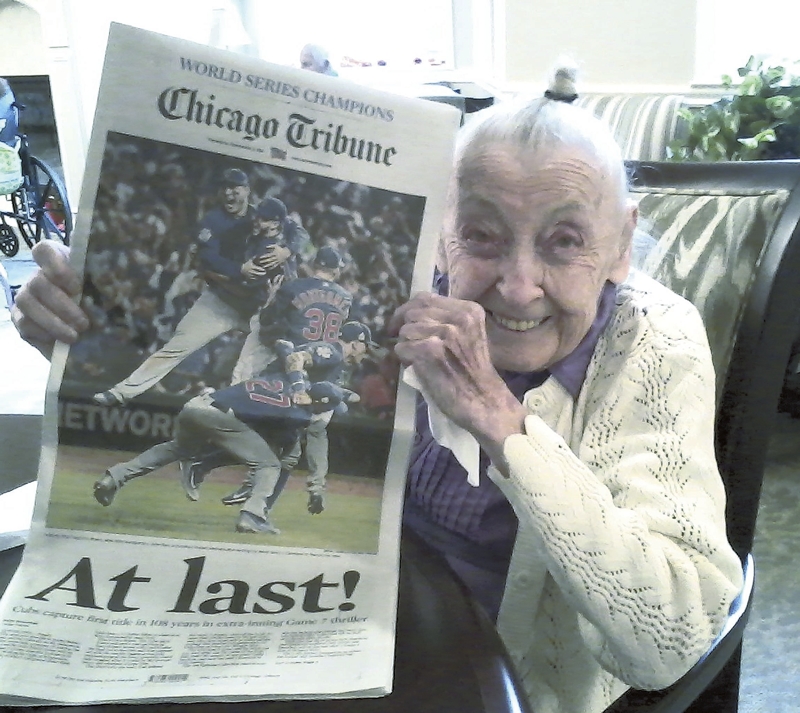 In this Nov. 4, 2016 photo provided by the Strobel Family, Cubs fan Helen Weithman, celebrates the Chicago Cubs World Series victory at her home in Glen Ellyn, Ill. A lifelong Cubs fan Weithman, 98, who according to family was slipping away until the Cubs made it to The World Series, "She really came alive when it started and they had the Cubs games on," said the daughter, Kathleen Strobel. Weithman died on Nov. 29, 2016 after finally seeing the Cubs win the series for first time in her lifetime. (Photo Courtesy of the Strobel Family via AP)

CHICAGO (AP) — At the end, not much was getting through to Helen Weithman. The memories she collected over 98 years were slipping away. When Kathleen Strobel talked to her, she could tell by the blank look on her mom’s face that that she didn’t understand a lot of what she was saying.

Then came the World Series.

“She really came alive when it started and they had the Cubs games on,” Strobel said. “When we started talking about it she said, ‘They haven’t won since I was born.’ It was probably the last thing we shared with her because she died on November 29th.”

Strobel hasn’t wondered if the hope of finally witnessing her Cubbies win it all added a little time to her mom’s life. Studies have long suggested no one can will themselves to stay alive just a little bit longer to reach a milestone event like a birthday, holiday, wedding or World Series.

Try telling that to the families of some Chicago Cubs fans who are convinced their loved ones hung on to see the team win its first Series in 108 years.

Robert Matijevich doesn’t know much about all the studies. He just knows what he saw at the North Chicago home where he lived with his father.

“He was really going downhill but in the World Series he was eating better, sleeping more,” Matijevich said of his 88-year-old father, John. “When the Cubs won, he said, ‘They did it in my lifetime.’”

He went to bed and died that night. Did the older Matijevich stick around long enough to see the Cubs win the World Series?

“I really think that was the reason, I really do,” said his son.

In 2004, as Boston was basking in an at-long-last World Series championship, statisticians at Ohio State University threw water on all those stories about dying fans who kept themselves alive long enough to witness the first Red Sox title in 86 years. Their study concluded there was no evidence that cancer patients willed themselves to live just a bit longer.

“You’d hear it all the time, that a nurse said so and so hung on until after Christmas, and it’s a nice story,” said the study’s co-author, Dr. Donn Young, a now-retired researcher at the university’s Comprehensive Cancer Center.  What is more likely, he said, is explained in another study that found people remember positive events more than they do negative ones — meaning that nurses and other caregivers are more likely to recall those patients who made it through the holidays than those who didn’t.

Still, Young acknowledged that some of the ailing might eat better, more faithfully take their medicine and get plenty of rest in the hopes of reaching a milestone. And there is no underestimating the value of the smiles and the general bliss for Cubs fans the night of Nov. 2 when the World Series ended safely in Anthony Rizzo’s glove during an epic Game 7 in Cleveland. There is no forgetting that, at least for a little while, the distraction that the Cubs provided to those who had just hours or days to live.

That showed up in the death notices — long a place where the families have included loved ones’ allegiance to the Cubs — in the days after the Series.

The Cubs’ win “was one of his happiest moments as he went through treatments and rehabilitation” for a nerve disease, read the death notice for the Rev. Patrick Cecil, a Catholic priest in Chicago, who died Nov. 14. “He will be sharing that victory with those from the Cecil family that have preceded him.”

It was a similar story for Marvin Peterson.

“He was thinking the (National League) pennant would be the only thing he’d get,” Margaret Peterson of suburban Bloomingdale said of her 82-year-old husband, who was dying of cancer at the time.

Instead, he watched on television as the Cubs beat the Dodgers in the National League Championship Series, the Indians in the World Series and then celebrated with millions of fans at a massive parade and rally.

At his bedside a few days before he died on Nov. 18 was a gift from his son-in-law: a replica of the World Series trophy.

“It gave him a lot of joy,” said his wife. “He was so thrilled after all those years of waiting.”

And that, she said, is helping her get through this first holiday season without her husband, who even at 82 could recite the names of the starting lineup of the 1945 Cubs. “I am so happy he got to experience that,” she said.

Roger Sieben could see what the win meant to his 105-year-old mother, Suzanne. Weeks afterward, she remembered only bits and pieces about the World Series victory party at her nursing home in Manitowoc, Wisconsin, the Cubs cake, the staffer dressed like the late Cubs announcer Harry Caray and the singing of “Take Me Out To The Ball Game.” But the woman who lived most of her life about a mile from Wrigley Field, close enough to hear the roar of the crowd if the wind was blowing just right, could remember with absolute clarity that the Cubs had won it all.

Then, after getting a letter from the hospice about this 105-year-old Cubs fan, the team sent up a package containing a shirt, decals, a photograph of the late Cubs great Ernie Banks and a note thanking her.

“When the package came she was just overwhelmed that they would remember her,” said her son. “That was one of the last memories she would have.”