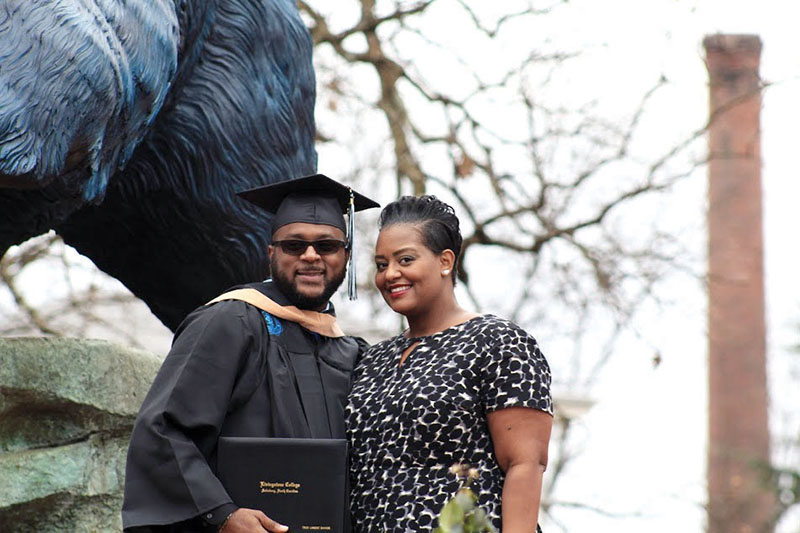 SALISBURY – Troy Savage went to ITT Technical Institute in Norfolk, Va., after graduating from high school in 1996 with plans to study electrical engineering.

But he was partying when he should have been studying and lacked the maturity to handle the rigors of college work. So he quit school after just a few months and moved to upstate New York to live with his older brother.

On Dec. 16, Savage walked across the stage in Varick Auditorium at Livingstone College to shake hands with President Dr. Jimmy R. Jenkins, Sr. and receive his bachelor’s degree in business administration during the institution’s fourth annual Winter Commencement.

Talk about a dream come true.

“When I heard them call my name, I just said to myself as I had done earlier that morning while putting on my cap, gown and hood, ‘I beat the odds,’ ” Savage said. “My parents, due to how recklessly I had lived my life, didn’t think I would live to see 21, much less graduate from college.”

Savage’s parents, Rudolph and Helen Savage, were inside Varick Auditorium to see their son get his degree. So was Savage’s wife, April, to whom he gives much credit for his accomplishment.

“The single biggest motivating force that kept me going toward my degree was the friendship of the woman who is now my wife, April Nicole Savage,” he said. “She believed I had greatness in me that had been suppressed by what I considered failures of manhood.”

Nowadays, Savage is on the proverbial cloud nine. But he has weathered many storms to become a college graduate, including divorce and alcohol and substance abuse.

“It was difficult to juggle a full time job and to be a full-time student, husband and father,” Savage said. “I prayed constantly for balance and wisdom. It was also stressful knowing that at times I was going to disappoint someone close to me because I was always so busy. That was perhaps the most challenging aspect of going to school at night after working all day. Sometimes worrying about others became a problem because I’m the type of person who wants to be there for everyone when they call me.”

By day, Savage worked in Livingstone’s mail room. By night, he took classes toward his degree. He credits Carol Pickett, director of Livingstone’s Nights and Weekends Program, with helping him persist to graduation.

“Carol Pickett was extremely helpful in my success as a student, as well as my work mothers Blanche Ford, Beverly Love and Audrey Cunningham,” Savage said. “I often shared with them my struggles, and they constantly encouraged and disciplined me in their own loving way.  There are so many others that played a part in my success as well, including faculty, staff and classmates, but my wife was my biggest supporter. She understood the importance of me furthering my education, as she was already accomplished in her professional life and career. She understood the commitment it required for me to complete my degree, and she gracefully accepted her role and pushed me to the end. I am forever indebted to her. If I be the head, she is my neck and my backbone.”

Savage was promoted on Dec. 1 and now works in Livingstone’s business office as a student accounts counselor/representative.