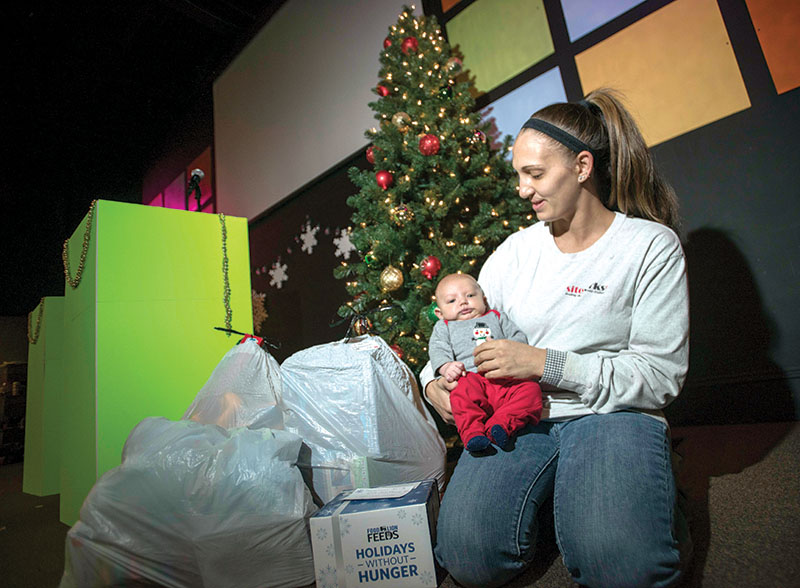 JON C. LAKEY / SALISBURY POST Shannon Mills holds up her 7 week old son Jaxson as she came to pick up her Christmas presents for Jaxson and her two other children, Aiden (8) and Damian (12). The Salvation Army Angel Tree distribution was under way at Life Church in Salisbury. Parents with children 12 and under could apply for assistance with help for Christmas presents for their children. Wednesday, December 21, 2016, in Salisbury, N.C.

SALISBURY — Shannon Mills at one point held down two jobs — Jersey Mike’s Subs and Paul’s Professional Vending, but after giving birth to son Jaxson, seven weeks ago, she left those jobs behind.

In addition to little Jaxson, she has two other boys — Damian, 12, and Aiden, 8.

It’s hard to make ends meet, much less provide Christmas for her children so she turned to the Salvation Army of Rowan County.

The agency organizes and distributes the Angel Tree program, where individuals, businesses, churches or civic groups adopt a child and buy them gifts for the holidays. The agency also facilitates the Salisbury Post-sponsored Christmas Happiness Fund.

The community donates money that provides gift cards for families to shop for clothing or toys.

She moved to the area from New York four years ago to be with her then boyfriend. The two are no longer together and Mills has no family in the area.

“I don’t have anyone close to help me,” she explained.

She’s appreciative of the people who provided presents for her children.

“It helps me give some joy to my kids,” Mills said.

She walked from her home near the West End to the toy distribution site at Life Church, 708 W. Jake Alexander Blvd. She figured she’d just place the items in the bottom of her baby stroller and head home.

Her plan was to wrap the presents before the older children got home. But the toys exceeded her space. Volunteers immediately inquired as to how Mills arrived at the church.

When she informed them that she walked, they quickly came up with a solution.

“We’ll just deliver them to your house,” one volunteer said.

“No, we can deliver them,” the volunteer said.

Relieved that she didn’t have to make a return trip for the presents, Mills sat down for a few minutes in the waiting area.

Just yards away from the waiting area, church volunteers greeted those who walked through the door.

“Would you like a cup of coffee or hot cocoa?” they asked.

Janet Haynes, who attends Life Church, volunteered this year as she’s done for the last five years. But this year, she volunteered with daughter Ashtyn.

“We both believe we are on this earth to be the hands and feet of God. I’m fortunate to belong to a church that feels the same way,” Janet said.

There was also nothing hindering Janet from volunteering because her job at F&M Bank actually encourages volunteerism and allows employees to set aside time for community activities.

“There’s nothing quite like the feeling of helping someone,” she said.

“I’ve been blessed with so much. It’s great to be a part of an organization that’s giving to the community,” Ashtyn said.

Towanda Saunders is a single mom of three. She’s currently unemployed and home schools her children — a daughter, 13, son, 10, and another daughter 11.

She and her husband were married in Africa, where he remains. He’ll join her in the United States in January. Her husband is from Guyana.

Saunders said she’s thankful that because of the contributions of the community, her children and others will “get what they need.”

She explained to her children how others have reached out to help them.

“I teach them it is better to give than receive,” she said.

Saunders has lots to look forward to in the coming year. In addition to her husband joining her, she’s also working on being an ordained minister.

Michael Burgess said he hasn’t worked in three years and his wife has been able to, but the help they’ve received from the community will “put a smile on my kids faces.”

Although he’s grateful, Burgess said at the same time “it’s disappointing” for him because he’d so much like to be the one to provide the gifts for the children. The couple have four children.

“I’m appreciative of everything people have done for us,” he said.

Rosetta Fair said she and her fiancé Henry Baker lost their place to live in Kannapolis and have been able to stay with family until they get on their feet.

Baker just got a job, but not having to worry about Christmas has been a godsend.

The two have three girls, a 10, six and four-year-old.

“For them to help us out until we get back on our feet,” Fair finished saying.

Life Church has been hosting the toy distribution for the last five years.

“We are just honored to be a part,” said Pastor Chris Shelton.

He said he reminds his congregation that the building exists for the community.

“We want to be a part of an extension of these organizations that bring dignity to people,” Shelton said.

Volunteers will accept additional families Thursday at the Salvation Army office, 620 Bringle Ferry Road. The families can receive assistance on a first come, first serve basis from 9 a.m. to noon and later from 1 p.m. to 4 p.m.