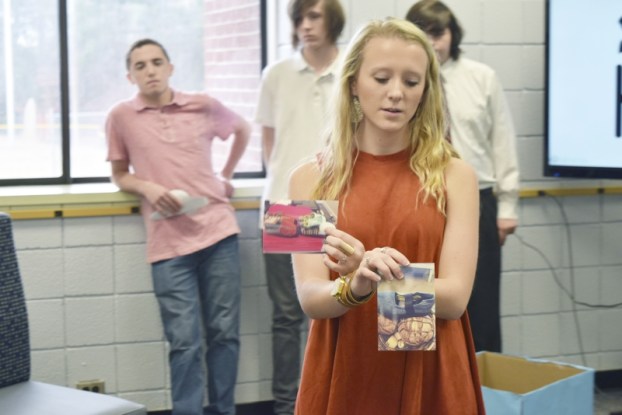 East Rowan student Peyton Berry explains about her group's project working with Sole Hope, a non-profit that provides shoes to children in Uganda, during a peer presentation Friday. Berry and her fellow students were given the challenge by teacher Wendy Fontenot to change the world in four weeks. Rebecca Rider/Salisbury Post

East Rowan students set out to change the world

“Four weeks ago, Ms. Fontenot challenged us to come up with an idea that would change the world,” a student said during a presentation Friday. “And we accepted that challenge.”

The East Rowan High School teacher said that this year, her world literature classes, typically taken by sophomores, had a common thread weaving all of the units together.

So after several units of study, Fontenot challenged her students to turn thoughts into reality and change the world — in just four weeks.

It started with a brainstorming session, students tossing out idea after idea while Fontenot raced to write them all down.

“Every single person had a voice,” she said.

Students spoke to their passions, and came up with ideas like running a blood drive, organizing a 5k, adopting a highway or raising money to build a school overseas.

Then, the students stepped up and picked something that interested them. They formed groups and tailored an idea until it was suitable, feasible and powerful.

“It’s so interesting how they made it their own,” Fontenot said.

The group collected jeans and donations to “sponsor” a pair of shoes and held a shoe cutting party. For Warden, it was chance to stretch across borders and continents.

“I’m a person who really likes to help other people,” she said, “and I feel like I found my niche.”

Others chose to focus their energies closer to home, and worked on small projects to bring a little brightness to the world. One group went to a nearby mall and handed out flowers to strangers, and another group started a jewelry company, turning pennies into necklaces and bracelets.

“It’s to remind you that you’re here for a reason and you have a purpose,” student Savannah Winters said of the bracelets.

Money earned from the items was donated to Rowan Helping Ministries.

Fontenot said that some of the projects may not have “changed the world,” but they definitely spread a little bit of joy — which, in a high-stress world, can make all the difference.

“It’s a start, right? Showing kindness to other people,” she said.