Duke beats Elon but talk is about Allen’s trip 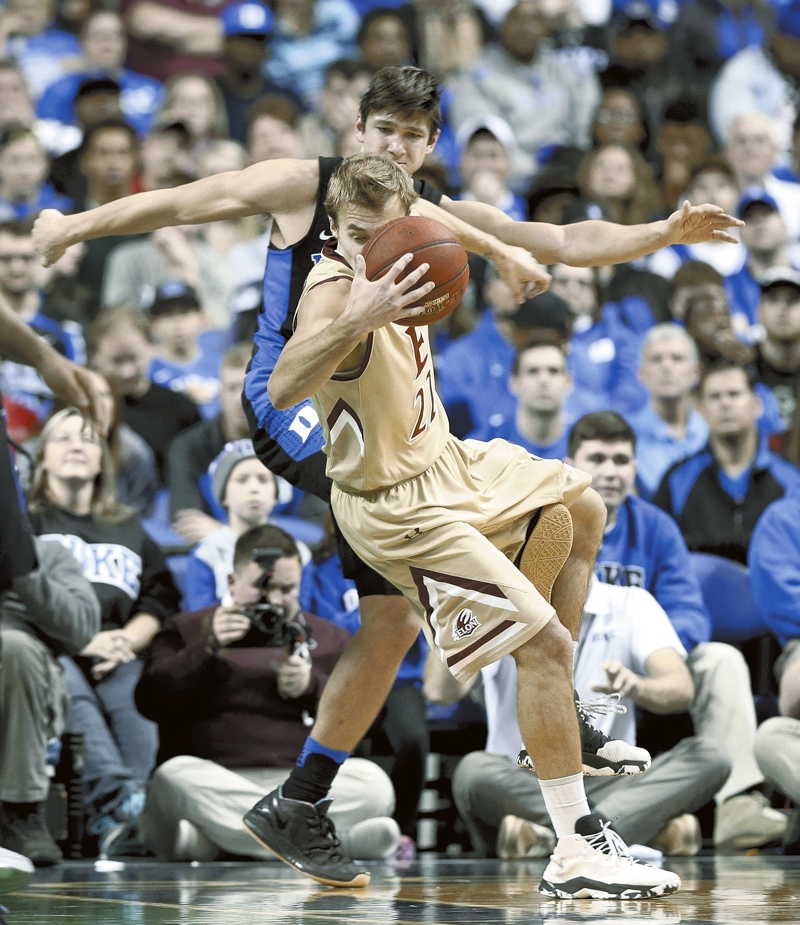 Elon's Steven Santa Ana (22) is tripped by Duke's Grayson Allen (3) in the first half of an NCAA college basketball game in Greensboro, N.C., Wednesday, Dec. 21, 2016. Allen was called for a technical foul on the play. (AP Photo/Chuck Burton)

GREENSBORO (AP) — Duke’s Grayson Allen sat at his locker, his head hanging and voice barely registering much louder than a whisper. He couldn’t explain to a crowd of reporters huddled around him why he had tripped an opponent during a game for the third time in a year.

“I mean, I don’t plan on doing it again,” Allen said as he fought back tears. “I made another mistake. I have to try to be better again, just like I tried to be better from last year.”

Allen’s trip of Elon guard Steven Santa Ana overshadowed the fifth-ranked Blue Devils’ 72-61 victory over the Phoenix on Wednesday night, an incident that led to a technical foul and was described by Hall of Fame coach Mike Krzyzewski as “unacceptable.”

“I had a long talk with him afterwards,” Krzyzewski said. “And the right thing to do was to apologize in person. … I’m pleased that Matt gave us an opportunity to do that.”

Allen was whistled with 4:15 left in the first half after getting tangled with a driving Santa Ana, sending Santa Ana to the floor. Officials reviewed replays that showed Allen kicking his right leg up and catching the back of Santa Ana’s left knee.

Krzyzewski pulled Allen for the rest of the half, with Allen at one point standing with a towel around his neck and shaking his head during a timeout. He didn’t start the second half and finished with three points on 1-for-8 shooting.

“I made a really bad play,” Allen said. “I’m sorry to him, Santa Ana. I’m sorry to the officials who have to call that. I’m sorry to my team, it’s selfish and it took away from them. I’m not proud of it at all.”

After Allen’s trip, Duke (12-1) saw a 32-24 lead turn into a 35-34 halftime deficit before earning its 10th straight win in its final game before starting conference play.

Brian Dawkins scored 18 points for the Phoenix (7-5). Santa Ana, who finished with 11 points, tried to deflect questions about the trip by calling Allen “a hard competitor as is everyone on the court” and added: “We just I guess got tangled up.”

“He came up to me and apologized to me and was very sincere about it,” Santa Ana said of the postgame meeting, “and I accepted his apology.”

Duke: While Kennard continued his high-scoring ways, freshman Jayson Tatum scored 18 points, though he shot just 7 of 22 from the field. Still, he had eight rebounds, four blocks and two steals in 37 minutes, part of a freshman class that’s only now starting to get healthy.

Elon: The Phoenix had plenty of reason to feel good about much of the game. Elon shot just 39 percent in the first half but went 7 of 14 from 3-point range to lead at halftime, then kept hanging around for much of the second half before Duke finally began to stretch its lead as the game went on.

“I thought defensively we played to get stops rather than to do what Coach says,” Matheny said of the first half. “That’s a credit to our players. I felt we made things challenging for them. … And I thought for the most part we didn’t give them anything for free.”

Another touted freshman, Harry Giles, scored his first college point on a second-half free throw. He had missed the first 11 games as he recovers from an arthroscopic knee procedure in preseason.

The 6-foot-10 forward made his college debut Monday against Tennessee State, then missed his only two shots and had two rebounds in 6 minutes against Elon.