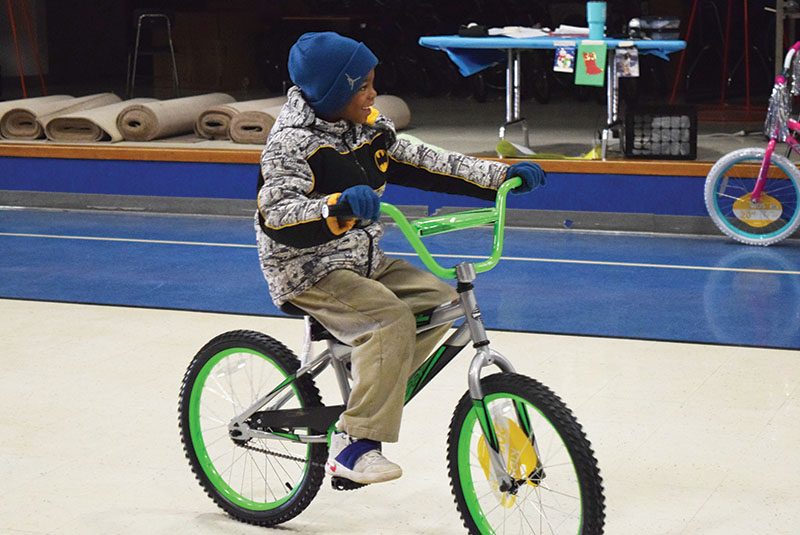 Diego Wylie takes his new bike for a spin around the gym at Hanford-Dole Elementary. Diego is one of 100 students to receive a bike this Christmas thanks to a donation from Javon Hargrave. Rebecca Rider/Salisbury Post

SALISBURY — The gym at Hanford-Dole Elementary is crowded with students browsing rows and rows of gleaming bicycles. Diego Wylie walks up to a bright green bike with his mom and grabs the handle bars, his smile wide.

Javon Hargrave, nose tackle for the Pittsburg Steelers, once walked these halls. This Christmas season, he was looking to give back, father Tim Bates said. A graduate of North Rowan High School, Hargrave also spent time at Hanford-Dole and North Rowan Elementary.

“So he wanted to donate…back to each school,” he said.

Hargrave gave $5,000 to each school to benefit students. And while Bates said Hargrave wanted to do something to promote health and movement, in the end, it was up to the schools.

“Each school decided how they wanted to serve the youth,” he said.

At North Rowan Elementary, that looked like a surprise shopping trip for 46 students. On Monday, the students, accompanied by Principal Katherine Bryant and the Bates family, took a trip to Walmart. Each student was allowed to purchase up to $70 worth of toys for themselves and their families.

Each family will also receive a dinner for Christmas, Bates said.

At Hanford-Dole, it looked like 100 bicycles. Bates is also involved in the school through the program Man Up Monday, a mentoring program he created, and had an idea of how the money would be spent.

Learning to ride a bicycle is a regular unit in P.E. classes at Hanford-Dole, teacher KatiEarl Bates said. It’s one of the most popular weeks of the year. When the school was approached by Hargrave, teachers began collecting a list of students who didn’t have bikes.

On Wednesday afternoon, the bikes, purchased from Walmart, were delivered to the school to be handed out.

But the effects will go beyond a simple gift — it’s a lesson that will last for the rest of their lives.

“That’s the main thing is to see them happy and to plant the seed that it’s great to give,” she said.

Bates echoed the sentiment, saying he hoped that the students would remember this gift, and remember to give to others, in turn.

And it was a reminder that, even in difficult times, there is still a bit of joy.

“There are great things that are happening, that can happen,” he said.