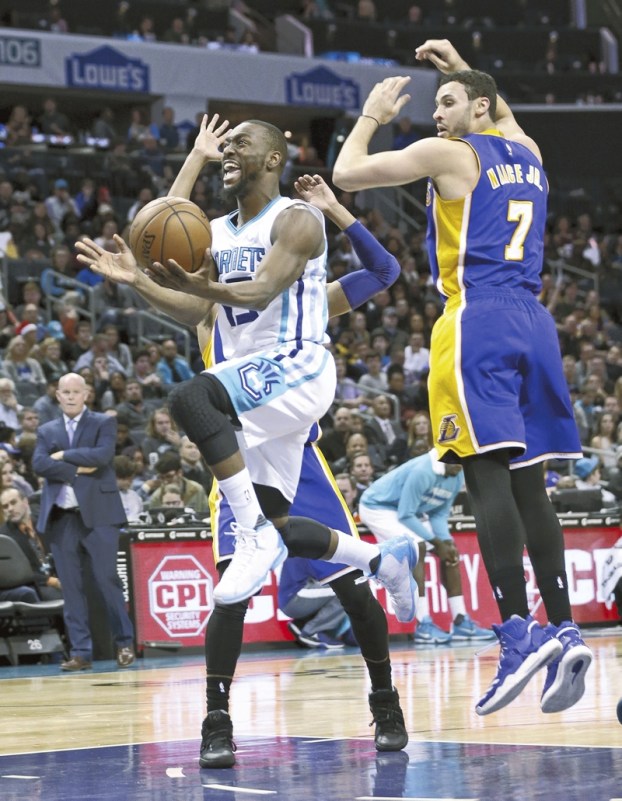 CHARLOTTE (AP) — Kemba Walker had 28 points and 10 assists, Marco Belinelli scored 11 fourth-quarter points and the Charlotte Hornets rallied from 19 down to beat the Los Angeles Lakers 117-113 on Tuesday night.

Walker had 15 points in the third quarter and a key rebound with 27.9 seconds left in the fourth to set up a tiebreaking jumper by Nicolas Batum with 13 seconds remaining.

Batum had 23 points on 8-of-12 shooting and added 10 assists. Belinelli finished with 13 points.

Jordan Clarkson paced the Lakers with 25 points with 7-of-9 3-point shooting, and Nick Young added 24 points while hitting 5 of 10 from 3-point range.

Los Angeles made 16 of 33 3-point attempts (48.5 percent), but the Hornets still secured their second straight victory.

The Lakers, meanwhile, fell for the 10th time in their last 11 games.

Fueled by 12 3-pointers on 18 attempts in the first half, the Lakers logged a season-high in points in a half to take a 73-59 lead to intermission.

Los Angeles made four 3-pointers, including three from Clarkson, during a 15-0 run bridging the first and second quarters to lead 53-35. Clarkson made five 3-pointers before missing a shot from beyond the arc.

The Lakers let the lead evaporate in the third quarter, however, when the Hornets mirrored the 15 consecutive points to close within 77-75 with 8:00 left in the quarter. Batum and Walker each had six points in that stretch.

Walker made 7 of 11 shots in the third, helping the Hornets lead 88-83 with 4:15 left in the quarter. It quickly disappeared after an 11-point spurt by the Lakers.

Belinelli made 3 of 5 3-point attempts in the fourth quarter to help the Hornets close the deficit.

Lakers: Rookie forward Brandon Ingram hails from Kinston, about a four-hour drive from Charlotte. More than 500 people from his hometown made the trip to watch his first appearance in North Carolina since he played at Duke. Kinston’s population is about 21,000. Ingram scored his first bucket of the game on a driving spin move with 3:01 left in the second quarter, earning a loud chorus of oohs and cheers from the Spectrum Center crowd. … Larry Nance Jr. limped off the court holding his left knee with 4:15 left in the third quarter after scrambling for a loose ball. He did not return. … D’Angelo Russell returned after missing one game with a sore left knee. He had missed 12 games with the injury before returning Dec. 11. … Forward/center Tarik Black missed the game with a sprained ankle.

Hornets: Charlotte held a moment of silence before the game for TNT sideline reporter Craig Sager, who died this week from leukemia.

Lakers: Play at Miami on Thursday night in the sixth stop on a seven-game trip.