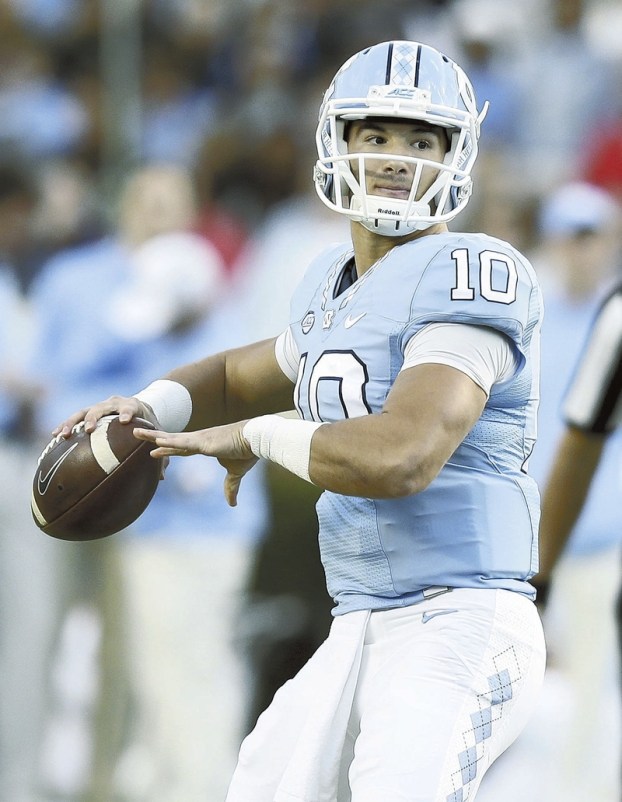 FILE - In this Nov. 19, 2016, file photo, North Carolina quarterback Mitch Trubisky (10) looks to pass against The Citadel during the first half of an NCAA college football game in Chapel Hill, N.C. Trubisky is focusing more on playing Stanford in the Sun Bowl than the NFL decision that awaits. The junior is projected as a possible first-round draft pick if he skips his final season with the Tar Heels. (AP Photo/Gerry Broome, File)

The junior is projected as a possible first-round draft pick if he skips his final season with the Tar Heels. Trubisky said he’s reviewed some of the information coach Larry Fedora has gathered for him on his draft prospects, but is holding off on a decision until the season is complete.

“I’m not letting it take up too much of my time and not letting it stress me out that much,” Trubisky said. “I’m just trying to get as much information as possible and try to figure out what’s best for me, but at the same time, staying focused for the bowl game that we’ve got ahead.”

The Mentor, Ohio native has had an amazingly fast climb for a player who had never started a college game as recently as August. After spending his first two years seeing only spot duty behind Marquise Williams, Trubisky ranks 10th nationally in passing yardage (3,468), 12th in touchdown passes (28), 11th in pass efficiency and fifth in completion percentage (68.9) for the Tar Heels (8-4).

Trubisky said the feedback obtained by Fedora has put him as a possible first-rounder, but he’s trying to find out as many details as possible.

“It may be leaving now, it may be coming back,” he said. “So those are some of the things I’ve been thinking about: What’s going to put me in the best position to have a long-term sustainable career and be the best possible quarterback I could possibly be?”

Fedora said he has been getting draft information for Trubisky and three other juniors: tailback Elijah Hood, safety Donnie Miles and defensive back M.J. Stewart. Defensive tackle Naz Jones has already stated he will enter the NFL draft after the Sun Bowl.

Players have until Jan. 18 to declare for the draft. Trubisky said he’d like to make a decision by roughly a week before that deadline.

“I’m not going to tell them what I think is best,” Fedora said. “I’m just going to give them the information and then I’m going to expect them to make a good, educated decision.”

Still, Trubisky is getting used to seeing his name out among draft prospects already.

Last week, he graced the back cover of the New York Daily News as a possible draft target for the New York Jets — “It’s Tru Love!” the headline screamed — even though Trubisky has yet to say he’s leaving Chapel Hill.

Trubisky said several teammates texted him pictures of it, though he shrugged it off by saying: “I’m not like the tabloids-type of guy.”

“I thought it was funny,” Trubisky added. “What was it, the front of a magazine cover? Like, what am I doing there?”

From staff reports Carson’s girl basketball team had a strong effort on Tuesday but lost at Hickory Ridge in South... read more