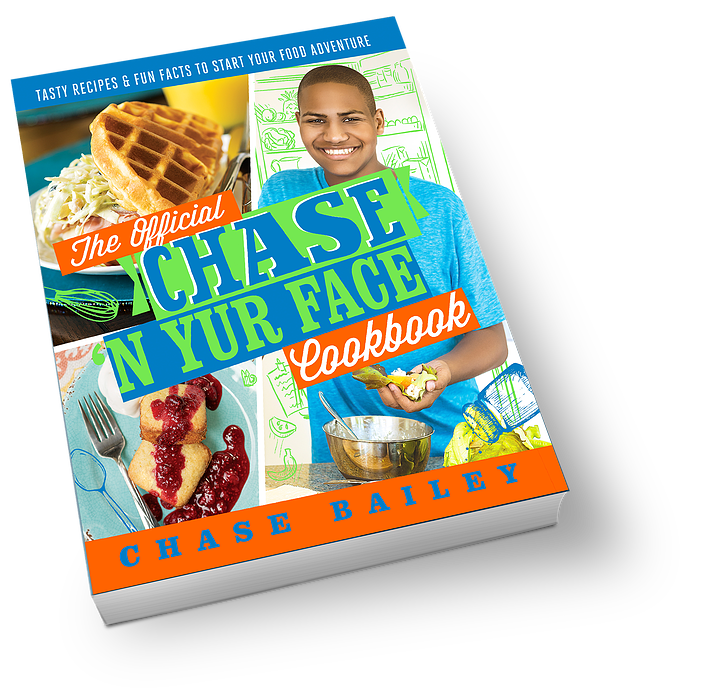 Chase Bailey, author of “The Official Chase ‘N Yur Face Cookbook,” was diagnosed with autism when he was 2, and faced severe food aversions for many years. But that did not stop him from following his dreams, overcoming his fears, hosting his own cooking show on YouTube and ultimately becoming a cookbook author by the time he turned 15.

“Food is extremely overwhelming for kids with autism,” says Chase’s mom, Mary Bailey. For years, Chase could only eat items such as chocolate chip cookies, pizza and French fries. When he was 8, he discovered a few cooking shows and “it became an obsession for him,” Bailey says.

The cooking shows also inspired Chase to try new things and look at food in a different way. These days, the young author from Irvine, Calif., enjoys classics such as burgers, pizza and tacos as well as selections that include beef tongue, calamari and sushi. “He’s much more adventurous than me,” Bailey says.

Chase tests and creates new recipes. According to his mom, he likes things to be different and always asks himself, ‘How can I make it interesting?’ Also, “cooking put him in a position where he was in control of creating his own food (and) gave him the sense of self-confidence,” Bailey says.

When he was about 11, he started his own “Chase ‘N Yur Face” cooking show where he shared recipes and cooking tips, and invited guest chefs to teach him cooking skills. Among his many pointers, Chase suggests using a wooden cutting board for vegetables and a plastic one for meats because, he says, bacteria from the meat can seep into the wood and make people sick.

Having kept a journal packed with recipes and ideas, Chase’s next project was to come out with a cookbook, and that led to “The Official Chase ‘N Yur Face Cookbook,” which features his creations, family favorites and recipes passed down from generations. Among them is his Not Your Average Oatmeal Cookie, which has blueberry and lemon and an unexpected hint of lavender.

I do love lavender, the smell and taste of it. So I asked: what if I put that in a cookie; and it worked,” Chase says.

Chase, who is homeschooled, has a piece of advice for those who face similar adversities: “Don’t create imaginary walls for yourself that can get in your way, and just chase your dreams.”

These cookies are light and flavorful, and speckled with blueberries. The lavender brings out a distinctly subtle aroma and luxurious kick. Soft and chewy, they are a level above the regular chocolate-chip cookies.

Zest and juice from one lemon

In a separate bowl, combine flour, cinnamon, nutmeg, lavender, baking soda, baking powder, salt and oats. Use a spoon to stir. Gradually, add the dry ingredients to the sugar and butter mixture and beat to combine. Using a spatula, gently fold in blueberries without breaking them apart.

Line 2 cookie sheets with parchment paper. Shape about 1 tablespoon of dough into a ball at a time, and arrange on the cookie sheets making sure to leave 1 to 2 inches apart. Bake for 11 to 13 minutes. Remove from oven and let cool before serving.

Visit the Pittsburgh Post-Gazette at www.post-gazette.com