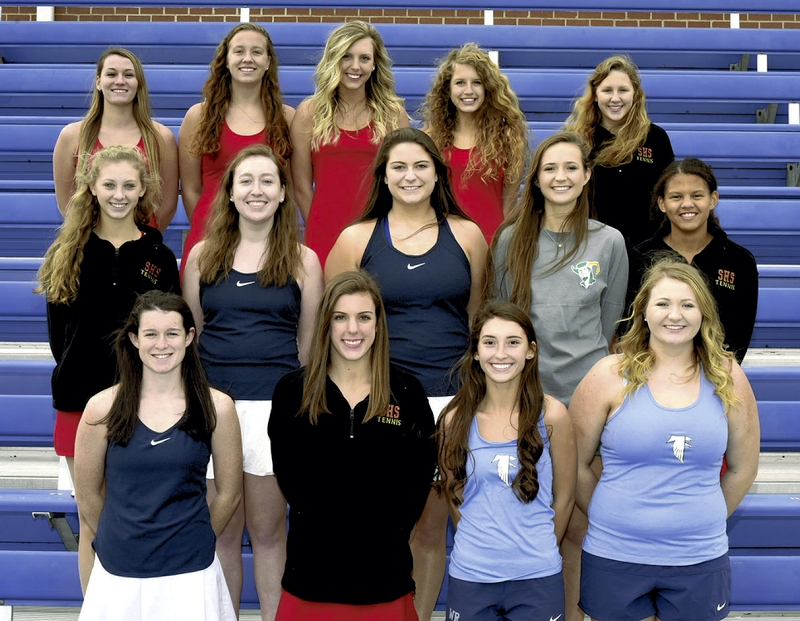 SALISBURY — Rowan County has two exceptional tennis players.
Salisbury junior Maria Capito went undefeated in the regular season.
West Rowan sophomore Payton Holt would have gone undefeated in the regular season most places, but her schedule included a league match against Concord’s 3A state champion Kate Earnhardt and a non-conference match against Davie’s Laura Becker, a 4A state qualifier who didn’t drop a match until the state tournament.
Capito and Holt had success in their regionals, but neither was a regional champ. Both qualified for their respective state tournaments, but both lost in the first round at the state level, so their seasons were very similar.
Capito’s overall record was better, but Holt’s schedule was more difficult.
Salisbury and West didn’t meet — that’s a match both teams hope to schedule next season — so the only logical solution was for Capito and Holt to share this year’s Salisbury Post’s Rowan County Player of the Year award.
At 5-foot-6, Capito is a terrific all-round athlete who also shines for the Hornets in basketball and soccer. Tennis is her strongest sport, but she’s capable of making all-conference teams in all three.
“I do have a busy schedule,” Capito said. “But I try to play in some weekend tennis tournaments to keep my skills up.”
Capito doesn’t hammer the ball, but she has good quickness and she wears out opponents by returning everything and rarely making an unforced error.
“I’m not as aggressive as some players, but I’m consistent,” Capito said. “And I’m going to keep playing until the point is over.”
Capito’s finest accomplishment this season was leading a team for which gloom and doom was predicted. Salisbury lost the five regulars other than Capito from their strong 2015 team. Four graduated, while junior Julia Honeycutt focused on club soccer and ran in cross country meets.
It was harder this time, but Capito led a lot of new faces to yet another Central Carolina Conference championship and another undefeated conference season. That’s 14 straight crowns for the Hornets. They are 154-0 in the CCC in the last 14 seasons. A Hornet has been the CCC Player of the Year the last 11 seasons, and Capito kept that run going.
“I tried to help lead and our only senior, Ruth Clement, did a great job leading, as well,” Capito said. “People didn’t think we could be any good at all, but we kept pushing and we kept winning.”
CCC Coach of the Year Milton Griffith appreciated Capito’s effort.
“She’s a hard worker, a team player and very coachable,” Griffith said. “Maria always goes above and beyond what’s needed to reach her goals. I’m very proud that she was selected as co-player of the year. She’s so deserving.”
At just 5-foot-3, Holt is deceptive.
“She looks little and sweet, but there’s nothing sweet about her on the tennis court,” West coach Jonathan Brown said with a laugh. “I know everybody wants to win, but she just absolutely hates to lose, and that’s a good quality to have.”
Brown said Holt hates to lose at anything, even the practice drills that are focused on improving quickness and endurance and don’t involve a tennis racket.
“She takes losing hard,” Brown said. “I’m not saying I’ve ever seen her misbehave. She knows how to take a loss when she loses, but she’s never going to be happy about it.”
Brown said Holt’s speed isn’t exceptional, but what separates her from most players, besides her competitiveness, is her work ethic and her pace. She hits with serious power.
“I’m a pretty good tennis player, and she can hit with me,” Brown said. “For her size, she can really hit it. Watching a lot of the girls at the state tournament, she hits it as hard as most of them. That’s from playing so much and working at it as hard as she does.”
Holt is on West’s swim team now, but she still finds time to play tennis daily.
“I don’t take any months off,” Holt said. “If I swim in the morning, I play tennis in the afternoon. There’s no offseason for me. I just really want it and I want to be good at it. I love the game, and it’s what I want to do my whole life.”
Holt won all of her SPC singles matches, except the one against Earnhardt. She and partner McKenzie Koontz won all of their SPC doubles matches, except the one against Concord’s strong team.
Holt helped West have the best season it’s had in years. The Falcons tied for third in the SPC with Carson and Cox Mill. Concord won the league, with East Rowan second.
“We had some very good team success,” Holt said. “We lost tough matches to East and Carson, but we definitely got a lot better this year and we qualified for the state playoffs.”
•••
Salisbury’s top four players are on the all-county team. Joining Capito are sophomore Skye Mowery, junior Bethanie Stauffer and sophomore Rachel Seifert.
Under new coach Jason Causby, East Rowan finished the season strong, going 8-1 for second place in the SPC, beating West, Cox Mill and Carson and reaching the second round of the 3A state playoffs. The top four seeds for the Mustangs — senior Katie Barnes, junior Angel Scialdone, sophomore Lauren Weisensel and junior Mia Graham — are all-county.
Carson’s top three players are all-county.That’s junior Emily Sloop, junior Gabi Jolly and senior Margaret Correll.
West Rowan has two all-county players. Senior MacKenzie Koontz joins Holt, her doubles partner, on the squad.
North Rowan’s all-county player is senior Samantha Pritchard, a regional qualifier.
Capito, Holt, Barnes, Pritchard, Scialdone and Jolly also made the team last year.

All-County Volleyball: Carson’s Turnbull turned it up a notch