More than 800 ‘Cards for a Cause’ go to service members 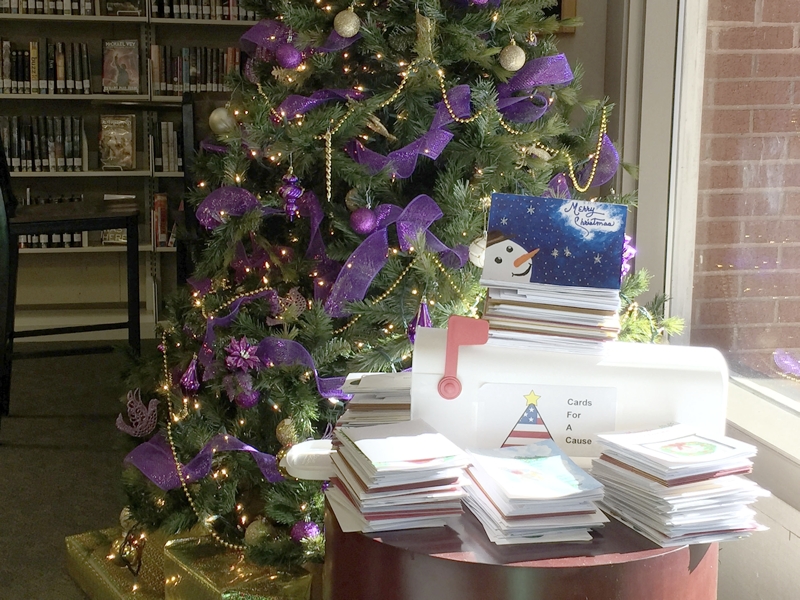 Submitted photo Some of the cards made and collected for Cards for a Cause, a program that sends cards to those in military service and veterans.

Rowan Public Library’s 2016 “Cards for a Cause” campaign delivered more than 800 cards to area recruiting offices to be delivered to the United States Armed Forces.

Through “Cards for a Cause,” patrons at all three branches – headquarters in Salisbury, South Rowan Regional in China Grove and East Branch in Rockwell – were able to send holiday cards to service members in the Army, Navy, Air Force, Marines and Coast Guard.

“We received so many different cards – from preschoolers’ drawings to professional artists’ work to store-bought cards – and it’s heartening to see so many reaching out to others,” said Laurie Lyda, East Branch supervisor. “Hopefully, the cards will offer some cheer to the service members separated from their families and friends this holiday season.”

“I am thrilled with the response we saw with this year’s campaign and hope to see even more involvement next year.”

This year, RPL staff made two deliveries to the area recruitment offices: 269 cards in mid-November and 550 in early December. The destinations of the cards varied. According to one recruiter, their branch’s latest round of cards will be sent to service members in Afghanistan.

“The recruiters were more than happy to get the cards – we mailed some to the US Coast Guard Office in Greensboro, the Air Force Office in Kannapolis and personally delivered cards to the local Army, Navy and Marines offices. We also had some cards submitted that were earmarked for veterans, so those were delivered to the VA hospital here in Salisbury,” Foster said.

Some cards were cute and funny, Lyda said, and some were serious. “It was poignant seeing a 3- or 5-year-old write ‘thank you for serving’ or they’re sorry the service person is not with their family.”

“At headquarters, at least 80 to 90 percent of participants were children under 12,” said Pam Bloom, a library associate.

“I had a couple of moms with sons in the military who thanked the library as a whole for doing the program,” said Foster. “This told me that we’d made a connection in our community by reaching out to those service members who couldn’t be with their families for the holiday. It assured me that this program is one that’s needed.”

“When we had our November Explorer Club meeting,” said Bloom, “we invited Stu Ott, a Vietnam veteran who was also stationed in Germany. He talked about how even if you had family who might send mail, that you might be moved, so your mail didn’t necessarily follow you. So, getting these anonymous letters could mean everything – everyone waited for mail day, and they would share mail often.

Ott’s wife, Maura Cooper, had just sent a package to a young man serving overseas whom she didn’t know. Some of the kids in the meeting were so moved by the story that they gave Cooper cards to include in her next package.

Ott brought a stack of letters that he’d written his mother and read excerpts of those. Cooper shared a copy of the thank you letter that the young man had sent her; it was written on the inside of an envelope and signed by members of his platoon.

“We had a wonderful variety of people who participated, from children who could only color to senior citizens to community groups,” said Joan Cress, library associate at South Rowan Regional.

“I think once people saw the opportunity to participate, they were happy to.”

For more information about Rowan Public Library and its programs, visit www.rowanpubliclibrary.org.