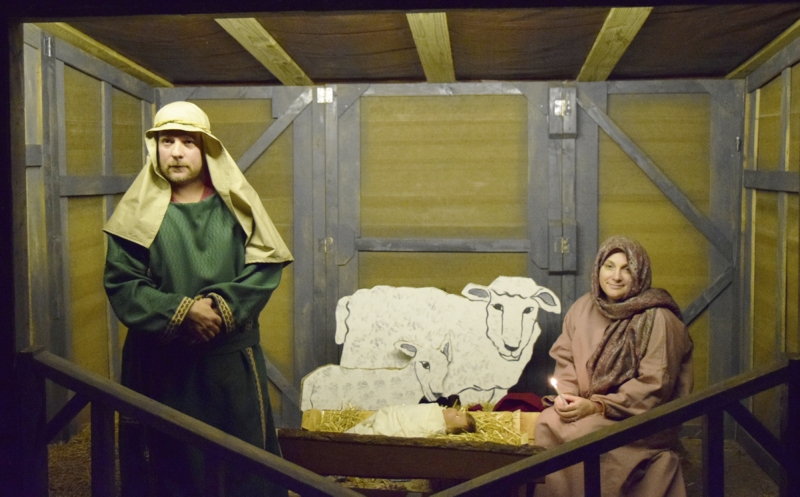 At North Main Baptist Church's Bethlehem Marketplace experience, held in early December, visitors were guided through an ancient marketplace by a Roman centurion. They also paid a visit to a field of shepherds, a crowded inn and ended the 30-minute tour at a stable, where they spoke to Joseph and Mary, played by Michael and Tiffany Esquer. Rebecca Rider/Salisbury Post

SALISBURY — What if you could walk back in time and experience the sights, smells and sounds of Bethlehem on a night more than 2,000 years ago? That’s the goal of North Main Baptist Church’s Bethlehem Marketplace — a Christmas program set in the small, middle-eastern town.

Led by a Roman centurion, guests explore the marketplace, talking to weavers, bakers, apothecaries, potters and blacksmiths about their life. Each has a different take on the story of a child born in town that night. Along the way, the guests step back in time to hear words spoken by the prophet Isaiah, to witness the visitation of an angel with a young Mary, to pause for rest at an over-crowded inn and stop by a field of shepherds.

The trip ends at a small, outdoor stable.

This is the second year North Main Baptist has held its marketplace. Last year, the event lasted two days, and attracted more than 400 people. This year, the church stretched it to three days, covering Dec. 2, 3 and 4, and hoped that they’d see at least 1,000 people over the weekend. Joanne Brown played an apothecary in Bethlehem at the time of Christ’s birth during a weekend immersive experience put on by North Main Baptist Church earlier this month. She was joined in the imagined marketplace by bakers, scribes, blacksmiths, carpenters, weavers and potters. Rebecca Rider/Salisbury Post

Inside the market, music plays and artisans ply their trade. In one stall, a weaver works at a loom while a woman carves cane next to him. A basket-weaver works on wares, and a carpenter challenges anyone who stops by to a betting game with a dreidel. All of the staff stay in character in a way Robertson compared to the colonial village of Williamsburg.

“That’s what we’re doing with Bethlehem,” he said.

Last year, Olsen said she felt it was time to start it up in Salisbury.

“This has been something of a dream of mine,” she said.

The goal, she said, is for guests to imagine themselves as a contemporary of Mary and Joseph, traveling to Bethlehem for the census.

The event itself is a product of community effort, with church members and volunteers populating the town of Bethlehem, and local businesses donating materials or souvenirs to be given away — such as the dreidels.

It’s that community spirit that makes Bethlehem Market such a special place.

“This is meant to be a gift to the community at Christmas time,” Olsen said.