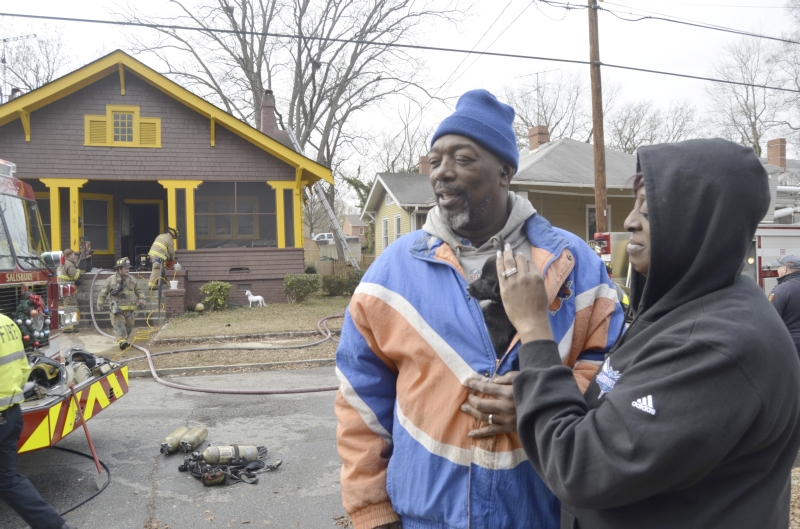 Ernest and Gwen Seaman are grateful that none of their children were home Tuesday at their 511 W. Council St. home when a fire began. Firefighters found their dog, Socks, in a crate in a back hallway. The couple were worried that the dog perished in the fire. Shavonne Walker/Salisbury Post

SALISBURY — Gwen Seaman and her husband Ernest were grateful Tuesday despite a morning fire at their West Council Street home.

Multiple fire departments responded to 511 W. Council St. just after 10:45 a.m. for a fire at the historic home.

Gwen received a call from a friend who works at Bank of America, inquiring about to her safety. After Gwen said she was fine, the friend told her the devastating news.

Gwen Seaman said she was scared because she wasn’t sure if her son and godson were home. She was also fearful that the family dog, Socks, a Pomeranian and rat-terrier mix, was not able to get out.

A fireman who went into the home saw the small black dog with white feet inside a kennel. He grabbed the kennel and handed it off to another fireman at the door.

The family received the puppy recently, after their dog died.

Seaman, who works in Mooresville, said she sped all the way home. When she arrived, her two sons, godson and dog were fine.

Asked about her belongings, Seaman quickly said, “I’m not worried about it. I’m happy everybody is fine.”

The family has lived in the 1912 home for more than 20 years. As they watched firefighters go in and out of their home, family members were greeted by concerned neighbors.

One neighbor offered help and a huge hug.

As for losing things right before Christmas, Gwen clutched Socks tightly and said, “Everything else is material, but you can’t replace a life.”

Her youngest son, Dondrea, sprinted from the corner of North Ellis Street to West Council Street, he said, because he wasn’t sure if anyone was in the house. Firefighters had to pull Dondrea back when he began to bound up the front steps.

Firefighters could be seen calming Dondrea as he held onto the tiny dog.

Smoke was showing when firefighters first arrived and the fire was upgraded from smoke to a working fire, said Division Chief Jay Baker.

The first crew inside the house conducted a search and soon realized no one was inside.

Baker said an off-duty police officer also knocked on the door and no one answered. He said the officer told a firefighter he thought there was a dog in the home.

Firefighters had to tear a ventilation hole in the roof so the fire and smoke could escape.

There was smoke damage throughout the home and the fire was confined to the middle part of the house. Baker said there was also some water damage to the house.

The Hanford Dole Chapter of the American Red Cross is helping the family.