All-County Volleyball: Carson’s Turnbull turned it up a notch 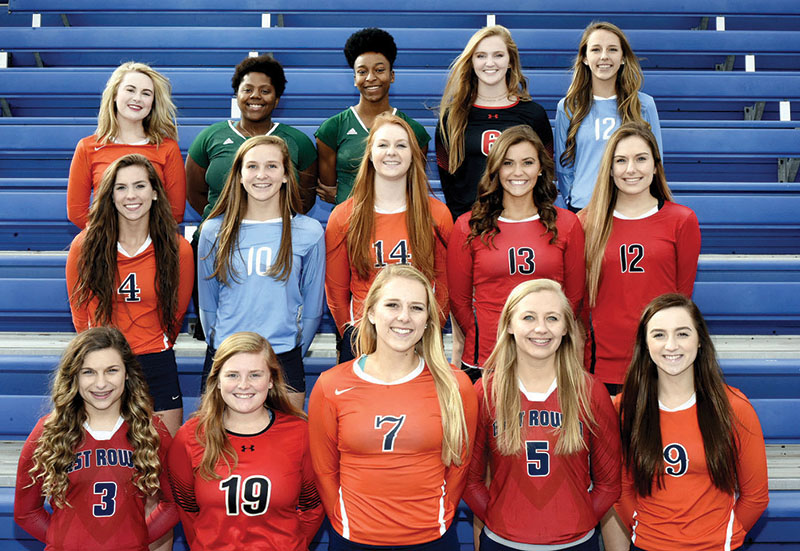 SALISBURY — Senior Elena Turnbull led Carson’s volleyball team.
She led statistically, as well as emotionally and vocally.
She led in kills with 284. Led in aces with 62. Led in digs with 339. Led in serves received with 477.
The 5-foot-10 middle hitter also accounted for 74 blocks, second on the team.
“Just a fabulous player all-around,” Carson coach Kelan Rogers said. “A four-year starter, and for the past two years, the focal point of our offense — and our defense.”
Turnbull, who never left the floor until a match was decided, was the best player on the best team, and that person is always a solid choice as the Rowan County Volleyball Player of the Year.
Turnbull was the runner-up for the award as a junior when the pick was her senior teammate Morgan Hester.
“We had two really great seniors (Hester and Jordan Osborne) in that 2015 season, but Turnbull won our team MVP award,” Rogers said. “That’s how good she is.”
Turnbull started as a freshman when the Cougars were 34-1 and finished as 3A runner-up. That’s another indication that Turnbull is mighty good.
“I’m proud that I started on some great teams for four years,” Turnbull said. “I was lucky I had a chance to grow up playing for Coach Rogers. He teaches you a lot about volleyball.”
Carson was 102-20 during Turnbull’s career and went 23-6 this season. Half of this season’s losses were to 3A state champion Cox Mill and one was to 4A runner-up Reagan, so Carson faced top-level competition. The Cougars won two out of three against a Hickory Ridge squad ranked sixth in 3A.
“We usually had the right mindset to win those tough matches,” Turnbull said.
What makes Turnbull special?
“She pushes herself to be good,” Rogers said. “She’s got drive. She’s a powerful hitter, a great passer, a great server, a great defender, and she blocks well. There are absolutely no weaknesses to her game.”
On deck for Turnbull is beach volleyball at UNC Wilmington. That’s a spring sport at UNC Wilmington where the campus is about six miles from Wrightsville Beach. UNC Wilmington was the first Division I school in the state to field a beach volleyball team. The program is still young.
“I started playing beach volleyball three years ago, and I loved it immediately,” Turnbull said. “I knew that it was what I wanted to do in college.”
Beach volleyball (played by two-girl teams) suits Turnbull’s range of skills. Indoor college volleyball is mostly about sheer power, but the beach game incorporates more versatility, more finesse, more shot-creating and more strategy.
“The part of volleyball I’ve always liked best is the defensive aspect,” Turnbull said. “I like the strategy, the anticipation of what your opponent is going to do next. You’ve also got to really communicate with your teammate, and it’s a lot easier to communicate with one other person than with five.”
While Rogers is an indoor guy, he recognizes the skill development that comes from two-person volleyball.
“The beach game fits Elena perfectly because she has so many skills,” Rogers said. “If you’re just a little passer or just a big hitter, you’re not going to do very well at beach volleyball.”
•••
While Rogers maintained Carson’s presence as one of the elite 3A programs in the state, West Rowan’s Jan Dowling guided the county’s most improved team and is recognized as the Post’s Rowan County Coach of the Year.
Dowling led the Falcons to a 14-12 record, their first winning season in a decade, and a playoff berth. Seven of the losses were to Cox Mill, Carson and Hickory Ridge.
•••
Carson also placed seniors Madison Barnhardt and Chloe Jacobs, junior Lindsay Elmore and sophomore Mallory Weast on the all-county team. Jacobs, starting for the first time at setter, was one of the keys to Carson’s fine season with 795 assists. Elmore, Weast and Barnhardt were lethal hitters and combined for 600 kills. Elmore topped the team in blocks, while Weast was second in digs.
•••
West’s all-county players are junior Braelyn Faust and freshman Tori Hester. Faust had 144 kills and led the Falcons in blocks. Hester has a good chance to be the next Turnbull. She led West in kills (306), digs and aces.
•••
South’s all-county players are seniors Breanna Lentz and Hannah Lambert, who led the Raiders to a 13-13 season.
Lentz paced the Raiders in kills (160) and blocks (102). Lambert was the team leader in aces (45) and digs (385).
•••
Salisbury’s all-county players are seniors Juliana Anderson and Abby Lee. Anderson, who won two conference player of the year and a county player of the year awards during her career, was a strong blocker and hitter for the fourth straight season. She was runner-up for CCC Player of the Year this time.
Lee, the Hornets’ libero, was outstanding as a server and defender.
They led the Hornets to a 7-3 league record and a tie for second place in the Central Carolina Conference.
•••
East’s all-county players are senior setter Jordan McCall and sophomore libero Baleigh Hill. They stood out during a tough season for the Mustangs. McCall is all-county for the third time.
•••
North’s all-county players are seniors Brianna White and Kiara Davis. White, who also excels in basketball and track and field, is one of the county’s top year-round athletes, and Davis also busy playing basketball with the Cavaliers.