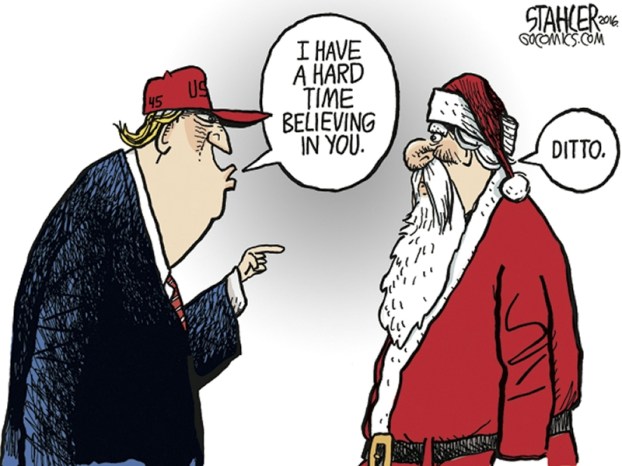 Ugliness in season of joy: Sparring over alleged war on Christmas

“Happy Holidays,” the grocery clerk said to the customer in front of me the other day.

“You mean, Merry Christmas,” the customer snapped back.

A war on Christmas? Yes, please. Because Christmas – the way we play it – needs some help.

The season meant to celebrate joy, generosity, love and kindness is now an annual cultural battleground for our divided nation.

Think this isn’t real? Just look at the White House.

The incoming president – a man not known for his religious devotion – trumpeted his Christmas bonafides during his “Merry Christmas USA Thank You Tour.” Donald Trump’s stages were decorated with Christmas trees – 16 of them in Orlando – and he made not a single mention of Hanukkah or any other faith Americans practice.

President Barack Obama and his family, on the other had, were once again flambeed online for their take on the season.

Their crime? A family holiday card. Yup. Holiday card, not Christmas card. A subversive, rebel plan to overthrow the nation’s $465 billion December industry because they didn’t put the words “Merry Christmas” on it, for the eighth year in a row!

“ ‘Merry Christ. . . er. . . scratch that. ‘We Are the Obamas, and It’s Some Random Holiday!” Sarah Palin tweeted, when she saw the new Obama family card this year.

Oops. There are a few other holidays this time of year, and the folks who celebrate Hanukkah, Kwanzaa, Yule, Saturnalia, Festivus and Ramadan – which does fall in December occasionally – are also citizens of America.

But nevermind. More Christmas! Because the holiday that launches layaway plans in August and begins its relentless soundtracks in October is totally endangered.

It was a little more than a year ago that Donald Trump, in one of his many campaign promises, vowed to win the alleged war on Christmas.

Last year he took on this pressing American crisis when Starbucks unveiled its holiday paper cup as an ombre red number, without snowflakes or reindeer or snowmen, the things that would’ve surely cemented a company’s dedication to the only son of God.

Plenty of self-described holy folks were outraged at the design aesthetic and Trump suggested a Starbucks boycott to a crowd in Springfield, Ill., promising, “If I become president, we’re all going to be saying ‘Merry Christmas’ again. That I can tell you.”

Because he’s going to repeal HB 666, the bill that makes it a crime to say “Merry Christmas”? I missed that one.

There isn’t and never was a war on this thing we think is Christmas. You can’t swing a cat anywhere in America today and not hit a piece of tinsel. Don’t worry, you’re covered if that’s what Christmas means to you.

Even most of the folks who described themselves as deeply religious told the Public Religion Research Institute in their 2013 survey that they don’t mind hearing “Happy Holidays” or “Seasons Greetings” this time of year.

This isn’t about religion. It’s about politics. Again.

I said it last year, and I’ll say it again this year. Yes, there is a war on Christmas. The real Christmas.

If real Christmas is about honoring the birth of an impoverished child to a homeless couple who must eventually flee a tyrant to keep their baby safe, then, yes, there is a war on Christmas.

If Christmas is about peace, joy, generosity, thankfulness and goodwill among people, then yes, there is a war on Christmas.

If Christmas is about honoring the spirit of Saint Nicholas — Nikolaos the Greek Bishop of Myra — the young man born into wealth who gave all his riches to the poor by tossing bags of gold coins through windows of struggling, impoverished families in his hometown, which is now part of Turkey, then yes, there is a war on Christmas.

The tragedies of that time that spurred men like Saint Nicolas and Jesus into action? They’re with us today.

There is a realtime, gruesome massacre underway in Aleppo, recorded on video and shared on social media every day. In our country, 21 percent of American children live in poverty and half a million Americans are homeless.

Nicholas rescued children from slavery, death and poverty. Jesus Christ fed the hungry, cured the sick and comforted the afflicted.

But our answer to the contemporary suffering we see before us?

We’re going to fight over whether we say Happy Holidays or Merry Christmas. Saint Nick and Jesus would be horrified.

Come on, America. We’ve got to be better than this.

By Bruce La Rue The decorative centerpiece in most homes this time of year is the Christmas tree. The lighting... read more