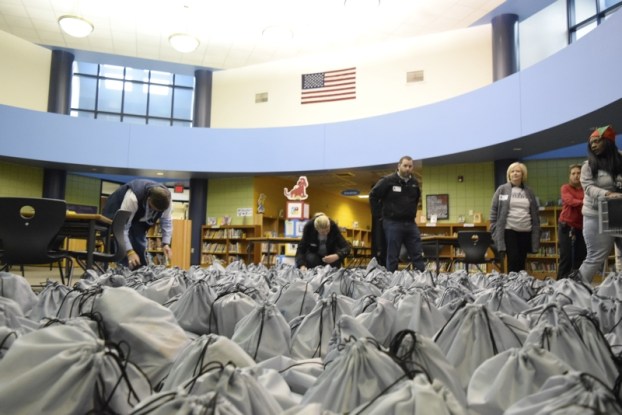 Food Lion, other organizations, provide food for the holidays

Koontz was one of four area elementary schools to which the grocery store giant paid a visit Thursday, delivering food for students to take home over the holidays. Others included Shive, Overton and Cleveland elementaries.

Karen Fernald, vice president of fresh category merchandising and pricing at Food Lion, said that schools were chosen based on need and size. With hundreds of students and a handful of volunteers, the teams needed to be able to get in and out in a short amount of time, which turned their focus on some of the smaller county schools.

“This is probably the highlight of the year for us,” Fernald said.

It’s the second year the company has donated meals to local schools, and Fernald said many employees looked forward to the day all year.

“A lot of our associates live in these communities, so it’s a blessing to give back,” she said.

After all the bags were moved to the media center, company volunteers loaded up armfuls, grabbing several bags and hanging them from their arms and shoulders — and moved out. Led by a member of the School Council, they trekked through the halls, visiting each classroom and handing a bag to each student.

By the end of the day, every child would have a bag full of food to take home.

The bags contain non-perishable foods like cans of soup and macaroni and cheese. Buried at the bottom of each drawstring bag was also a small package of gummy candy.

“So they get a little holiday gift and something they really need,” Fernald said.

Koontz Co-Principal Lori Marrero said that the event was “heartwarming.”

“I am overwhelmed by this level of generosity,” she said. “I’ve been a lot of places and I’ve never seen this outpouring of support from the community.”

And it wasn’t just Food Lion who reached out to help the schools, she said. Earlier this week, on the other side of the county, China Grove Elementary Principal Lea Anne Thomas welcomed the Santa Express — a partnership between Walmart and Charlotte’s Second Harvest Food Bank.

On Tuesday, a large truck came up from the Charlotte area and dropped off pallets of apples, school supplies and toiletry items. Students most in need also received socks and underwear.

“We tried to find some of the most high-need schools,” she said.

The donations were made possible through a $25,000 grant from Walmart, and provided every child at China Grove Elementary and North Rowan Elementary with a bag of apples, a toothbrush and toothpaste.

Thomas said that she thought the donation was “wonderful” and was happy fruit was included.

“Children, especially that live in poverty, their parents can’t afford things like apples,” she said.

China Grove Elementary is a community eligible school, where 100 percent of the student body receives free breakfast and lunch.

As the holidays march closer, community members across the county have stepped up to wrap around local schools and families — from food banks, to corporate giants to local churches.

“This is just a wonderful way to celebrate the holidays and to give back to the community,” Fernald said.

By David Freeze For the Salisbury Post A first-time event on Friday at the JF Hurley YMCA brought avid pickleball players... read more