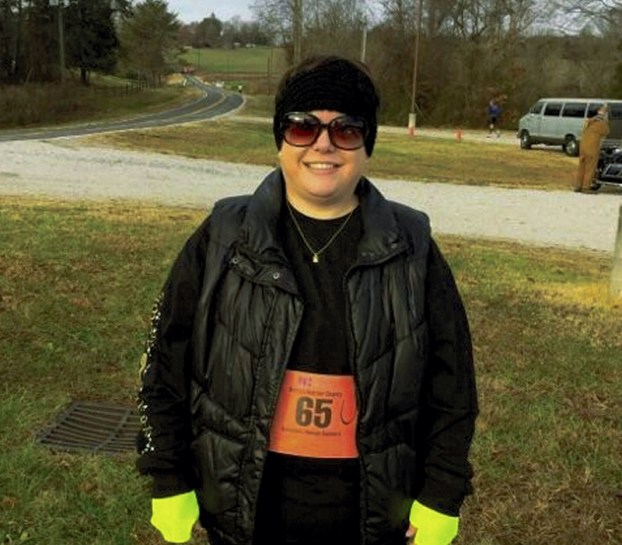 Brooke Taylor, after completing her first 5K on December 3rd at the Santa Run in Millbridge. Submitted.

One of my favorite things to do involves introducing new runners to all the joys and benefits of my favorite sport. Last year, I had the opportunity to speak at the Learn, Act, Grow program sponsored by the Rowan Public Library. The winner of a drawing for a Beginning Runners Class was Brooke Taylor. All she had to do was follow through and show up for the first night of class. Brooke chose the 2016 fall class and took a few moments the other day to recount her progress.

Brooke just happens to be the supervisor of circulation at the library. She said, “I was once referred to as the ‘library police’ by a patron who I called about unreturned books. This is my second career after having taught music for 12 years in the eastern part of NC.”

“When I won the door prize for the class, I originally thought about trying to switch with one of the other winners. But then I thought about the fact that I was turning 40 soon and had never tried to run a 5K before so I accepted the challenge.”

It is not uncommon to have people shy away from the class if they are surprised by winning an entry. But Brooke committed to do it and quickly signed up her friend, Kaye Houghton. Brooke said, “I had never been a runner before, except when I was late to class in college. I always loved walking on trails and in parks but no running otherwise.”

Once the classes began, Brooke began to show steady improvement. She said, “Early in the class, it took me about 23 minutes to complete a mile. I was moving pretty slow. But I enjoyed each class, especially the speakers who offered information I hadn’t thought about before. They made me rethink my approach to exercise, health and nutrition. However, I did not start to enjoy the running part until about week 6. I went to the Greenway to do my training run and about halfway through, I realized that I was having fun!”

The capstone for the running class was the Santa Run 5K, held on Dec. 3. Brooke had only a few goals when she started and those were very simple. She said, “I wanted to finish and not be last, plus prove to myself that I was capable of more than I thought and enjoy it. All those goals were met. But when we started, I wondered what I had got myself into. The first mile had an incline but when the course leveled out, I could breathe again. I loved the mostly downhill finish.”

“I had a bunch of friends and family waiting on me at the finish and that made the day much more special. I definitely plan to do the Santa 5K next year and improve my time.”

I asked Brooke what she would say to others who were thinking about taking up running. She said, “Stop considering and do it already. What do you have to lose? Don’t worry about being the slowest and most out of shape person running around town. That will be me. But I will be out there running right behind you.”

The next event locally is the Resolution Run 5K, cosponsored by the Forum and the Salisbury Rowan Runners. A ridiculously low entry fee including canned good gets you a dri-fit shirt, refreshments and your time. Rowan Helping Ministries gets the entry fee and canned goods. Come join us on Dec. 31 at 9 a.m. at the Forum. www.salisburyrowanrunners.org

By Susan Shinn For the Salisbury Post As Kyndall Moore wraps up her first year as president of the board... read more