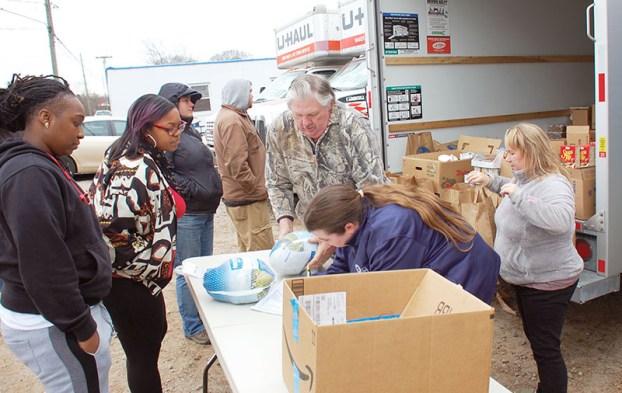 Mark Wineka/Salisbury Post Tanunika Imes, left, and Sierra Watkins, next to her, pick up holiday meals for their families from UAW volunteers working Friday outside of Patriot Towing on South Main Street, Salisbury. Imes and Watkins were laid off from Freightliner earlier this year, as were Stacy Groll, far right, and Brittany Best, middle.

UAW-Ford distributes ‘Boxes of Love’ to needy families, many connected to Freightliner layoffs

They showed up together Friday afternoon in front of Patriot Towing to receive some of the holiday meals being distributed by United Auto Workers Local 3520.

“It’s been hard to find a job,” said Watkins, a mother of a young infant. “By the help of God, I’m making it.”

UAW volunteers put the food together and worked out of the back of two large U-Haul trucks. In the region — mostly in Rowan and Iredell counties — UAW Local 3520 was giving out 800 meals.

The UAW especially reached out to Freightliner workers who had been laid off earlier this year, but other needy families in the community were welcome, too.

It’s the fourth year the UAW has provided holiday meals.

“You never know when it will be in your back yard,” Hill said, adding many people in Rowan County are unemployed or underemployed this Christmas.

Freightliner laid off Woodleaf resident Kimberley Chumbley in February. She has since landed a job with Alevo in Concord, but she appreciated UAW-Ford reaching out to her with its holiday meal offer.

“Since I’m alone, there’s no other income coming in,” Chumbley said. “It means a lot to me.”

Kendrick Hutchinson, who has two sons to support, just joined the ranks of the unemployed — again.

Freightliner cut his job in February, but he was called back during the summer to fill in for workers on vacation. He continued working after September but was laid off again Dec. 3.

He appreciated the holiday meal from the UAW.

Several of the UAW volunteers helping with Friday’s food distribution also were laid off from Freightliner this year, including Debra Koonts, who still belongs to Local 3520’s executive board; Brittany Best; and Stacy Groll.

Groll, who has three children and a husband still working at Freightliner, is taking advantage of a company offer to pay for courses at Rowan-Cabarrus Community College.

She is studying medical office administration. “It hasn’t been easy,” Groll says of changing directions after her layoff in April.

Even though she was laid off in early January, Best said, “I’m still 100 percent committed to Local 3520.” She heads the local’s women’s committee.

Watkins has found part-time work at Portrait Innovations and Imes has landed a full-time job in Lexington, but the women said it’s not the same as working for Freightliner.

Several of the former Freightliner workers stopping by for holiday meals Friday — meals were distributed from noon to 4 p.m. — said it can be a disadvantage having worked in a good-paying job at Freightliner when they apply for other positions in the area.

The potential employers sometimes assume if Freightliner offers them their old jobs back, they will leave, so they tend not to hire them in the first place, the UAW members said.

UAW-Ford is distributing more than 25,000 Boxes of Love to families in 17 states. The other regional distribution site Friday was at UAW Local 3520, located at 2290 Statesville Highway, Statesville.

In a press release, UAW-Ford Vice President Jimmy Settles said, “On this day — just as we offer a helping hand year-round — UAW-Ford stands in solidarity with families in need.”

Bill Dirksen, a vice president of labor affairs for Ford Motor Co., said the company was “glad to be able to lend a helping hand this holiday season, as we stand committed to helping people in need.”

Patriot Towing donated the use of the two U-Haul trucks that held all the bags, boxes and food being handed out. Hill encouraged meal recipients to thank the men and women of UAW-Ford by texting “Thanks” to 829373.

The N.C. Justice Center contends unemployment insurance changes made in 2013 “continue to play out poorly in communities across the state.”

North Carolina’s unemployment insurance reaches too few of the jobless for too short of a time and provides too little in payments, according to the N.C. Justice Center.

The Justice Center claims North Carolina also has the second highest exhaustion rate in the country, with half of those receiving unemployment insurance losing benefits before they find a job.

A devoted Ford man hits the road for Meals on Wheels

SALISBURY — J.C. Ritchie never drives anything other than a Ford — the reason will become obvious later — and he... read more