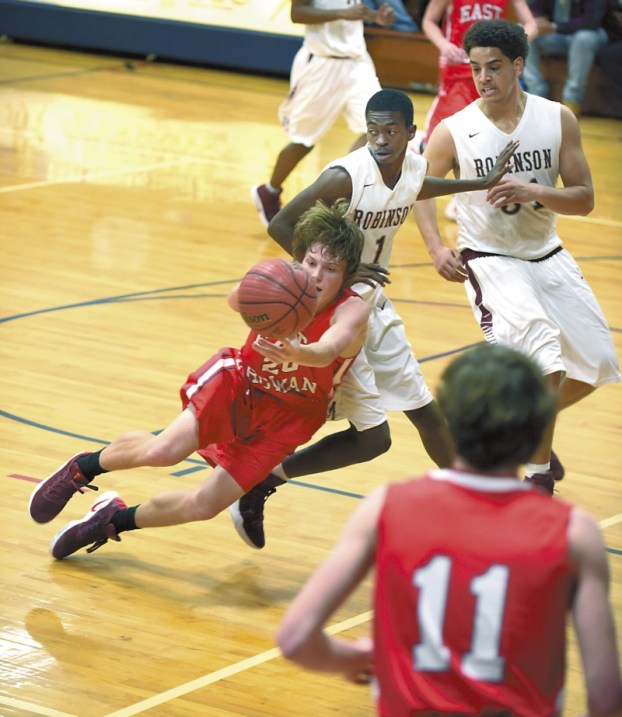 GRANITE QUARRY — East Rowan coach Kurt Misenheimer’s played well enough that he optimistically declared the Mustangs to be the best 1-8 team in the state.
That’s not really a title anyone seeks, but maybe they are. East put up a good fight on Friday before losing to Jay M. Robinson, 85-65.
“It was really more like a 10-point game than a 20-point game,” Misenheimer said.
He’s right about that. Lavar Batts Jr, Robinson’s incredibly athletic guard, scored 20 points for the Bulldogs (5-3, 4-2 SPC), but the biggest difference-maker was Jamari Roberts, a post man who is listed at 6-foot-7 but appears to be about 6-9.
“He’s really long and he’s really hard to guard,” Misenheimer said.
Roberts was invisible and scoreless in the first half when East Rowan’s Elton Hooper (17 points, 14 rebounds) owned the paint.
But Roberts took over in the second half, pouring in eight point-blank, high-percentage buckets, as the Bulldogs pulled away.
“Roberts got in foul trouble in the first half, but in the second half, he listened and didn’t get any more fouls,” Robinson coach Lavar Batts Sr. said. “In the second half, the big man went to work.”
Hooper, East’s 6-6 sophomore, was terrific in the first quarter, and the Mustangs actually took a 13-7 lead that had the crowd rolling in the aisles when Paiton File, a 6-5 guy who can shoot, swished the first of his five 3-pointers.
“We got the big man in foul trouble and we were shocking them,” Hooper said. “They weren’t expecting us to play like that. You could hear them talking on the court. They expected to just blow right by us.”
Lavar Batts Sr. said he warned his team the Mustangs (1-8, 1-6 SPC) were better than their record.
“Especially when you come into East Rowan’s gym, that team is always hyped, always ready,” he said. “I knew this wouldn’t be a walkover.”
Batts Jr. carried the Bulldogs in the first half, getting 16 of his points before the break. His aerial acrobatics and his ability to change from defense to offense in a heartbeat were impressive. The VCU signee pushed his team to a 41-33 halftime lead.
Still, the Mustangs were far from done. After File stroked back-to-back 3-pointers early in the second half, Robinson’s lead was 47-41, and a loud crowd began to believe the Mustangs might do some world-shocking.
“We did a lot of good things, working inside-outside,” Misenheimer said. “Collectively, we moved the ball well.”
Batts Jr. made the decisive play, attacking the rim like a helicopter with the Bulldogs leading by 10 late in the third quarter and drawing the fourth foul on Hooper. Hooper had to sit for several minutes, and even when he returned, he had to play passive defense against the re-energized and hungry Roberts.
Up 13 after three quarters, Robinson put up 25 points in the fourth quarter to break it open. The largest lead of the game for the Bulldogs came in the final minute.
Guard Bryson Sprinkle played exceptionally for the Mustangs. He’s crafty with the ball and got eight of his 14 points at the foul line.
“Everybody played well,” Misenheimer said. “Our tenacity and our energy are a lot better than they were two weeks ago. Robinson is really good. That’s the defending 3A state champs, but I felt like we were in the game and I believe we’re going to win our share.”
Robinson, coming off a huge league win against Cox Mill, has dropped close SPC games to Carson and Hickory Ridge, but the Bulldogs remain still stout even without Daniel Spencer and Jordan McKenzie, a pair of special players last season.
“It’s a new team and it takes time to come together with so many new guys,” Batts Sr. said. “But I like how fast we’re playing. We get it and we’re gone, and that’s our plan.”