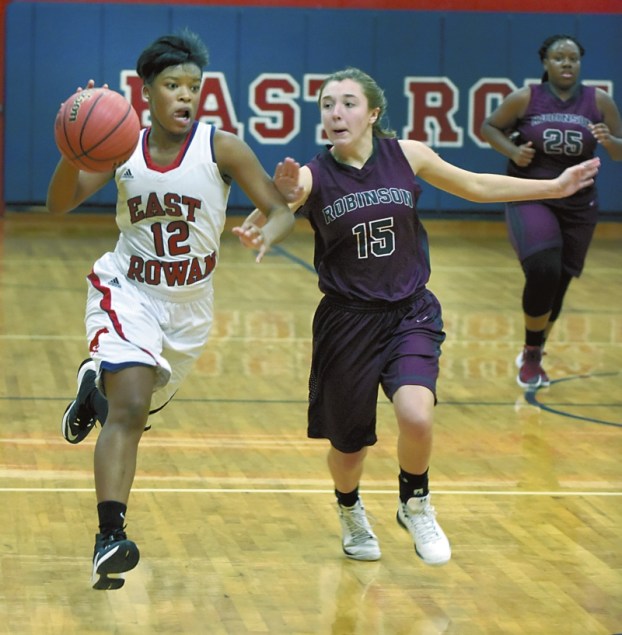 Prep Basketball: East girls getting better but fall to Robinson

GRANITE QUARRY — Robinson girls basketball coach Justin Thomas explained that his sophomore point guard Jada McMillan has missed a lot of practice time due to driver’s education classes.
McMillan also does some driving on the court, and her 16 points lifted Robinson past East Rowan in South Piedmont Conference action on Friday. She drove East defenders crazy a few times and steered the Bulldogs to a 52-29 victory.
Robinson got off to a rough start in the SPC, dropping early games to Hickory Ridge, Central Cabarrus and Carson, squads that appear to be the league’s three strongest teams.
“As a coach you can look down the road at the schedule and see that things aren’t really that bad and we’ve got a chance to get on a roll,” Thomas said. “But it can be tough for the girls to understand that they lost those early games to really strong teams. All they know is that they’ve been losing and it hurts.”
Robinson (4-3, 3-3 SPC) all but settled the contest by taking a 14-3 lead after a quarter.
“We were just really slow coming out in both halves,” East guard Hollie Harrison said.
The good news for the Mustangs (3-6, 1-6 SPC) was there were stretches when they didn’t look bad at all.
In the second quarter, they battled on even terms with the quicker and more experienced Bulldogs.
“In our early games I was mostly coaching our effort,” said East coach Kevin Holland, who has a team consisting of two of last year’s reserves and nine new faces. “The effort was good tonight and we got a lot of great looks at the basket. We just didn’t take advantage of the opportunities we had. If we make layups and free throws, we’re back in the game.”
East was only down 28-18 in the early stages of the third quarter, but a series of offensive rebounds by Robinson — a lot of them on missed Bulldog free throws — pushed the lead to 18 points by the end of the period.
Freshman Adalie Harrison, Hollie’s sister, made two 3-pointers and scored 10 points to lead the Mustangs. Anna Shafer, a tall post player with a nice touch, scored eight points. Zynoria Winford, a wing player with some quickness, added seven.
“We’re young, but we’re definitely getting better,” Hollie Harrison said. “We’re pushing more.”
Robinson established its biggest margin of the game in the closing seconds when Meghan Oszakiewski drilled a 3-pointer.
“It was a good win for us,” Thomas said. “We’ve been working on our rebounding a lot and that showed up tonight. I also thought our ball movement was better and our player movement away from the ball was better.”