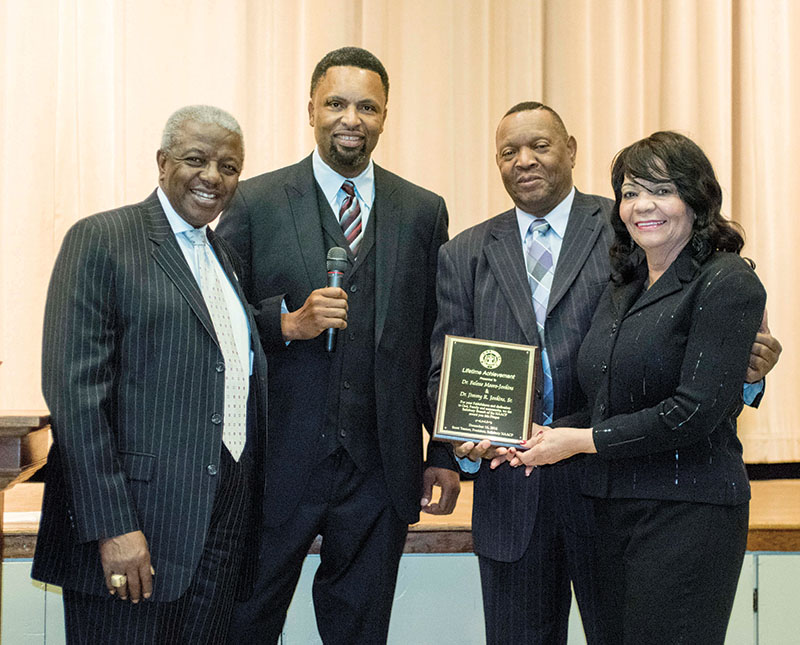 By Amanda Raymond and Elizabeth Cook

SALISBURY – As long as we all move forward without fear, everything will be OK, said Carolyn McDougal, the guest speaker at the 21st annual Freedom Fund Banquet.

With a new theme of “Forward Together Not One Step Back,” the Salisbury-Rowan branch of the NAACP hosted the banquet at the Salisbury Civic Center on Friday evening.

The incoming president of the local chapter, Gemale Black, was also introduced.

McDougal has served on the Dunn, NC, city council for six years and also serves on the Community Development Board.

She has assisted in numerous murder cases, racial profiling cases and instances where new business owners were being economically blocked.

She has won numerous awards, including the NAACP Humanitarian Award, the Freedom Torch Award and the Political Trail Blazer & Organizer Award.

During her speech, McDougal said she and her fellow NAACP members and supporters will have to be vigilant of what is going on in the state legislature.

She repeatedly told the crowd that if they had God on their side, they had nothing to worry about.

McDougal said the road may not always be easy. She gave the personal example of losing her husband Deacon Leslie McDougal.

“I thought that I was going to lose my mind when I lost my husband,” she said. “But then I had to stop and get myself together.”

She encouraged the crowd to get more involved with the NAACP and continue to keep politicians accountable, tying back to comments from attorney Jehan Davis at the outset of the evening about recent gun violence.

Davis said the community has had 16 killings in the short time she has lived in Salisbury, yet only recently have officials been spurred to action.

“It saddens me that it took the death of a young girl,” she said, referring to the drive-by shooting of 7-year-old A’yanna Allen as she slept in her bed recently.

“As a community, we have to do better,” she said.

It will take more than words to solve the city’s gang problem, she said, and she called for more funding for anti-crime efforts.

“We stand in unity with our local law enforcement,” Davis said. “We do not want an adversarial relationship.”

At the same time, she said, authorities need to be held accountable.

And she called for residents to help solve the recent string of crimes.

“If you hear something, speak up. It’s not a family thing; it’s a community thing,” Davis said.

In a call to action, local activist Al Heggins asked for a show of hands in response to questions about the existence of racism and whether it can be dismantled. When she asked if the community was doing enough to combat racism, the answer was a near-unanimous “no.”

Salisbury is at a critical crossroads, Heggins said. Positive actions have included peace circles, a love march, the work of the Night Crawlers. Some say these efforts are too easy, fake or a Band-aid.

But the absence of love has led to bad things, she said, such as recent killings, no-knock warrants and the injection of partisan politics into education issues. “We’ve got to have love,” Heggins said.

The Rev. Timothy Bates praised the work of outgoing president Scott Teamer. Bates said advocates of change have to use their gifts and be redemptively disruptive.

“All of us have been called for such a time as this,” Bates said.

Teamer also thanked numerous individuals for their support and contributions to the NAACP cause. He said if the new president has as much support as he did, he knows he will do fine.

“I told him, ‘All you gotta do is pray and have passion in your heart and you’ll be all right,’” he said.

After the banquet, Black said there was a lot of work to be done in the community, but he is up for the challenge.

He said he found a good mentor in Teamer and the chapter has a strong executive committee.

Black hopes to work with the mayor, city manager and police chief to get to the root of the city’s problems and start developing solutions.

Teamer said it was important for leaders to pass the mantle over to the next generation to continue the work.

He said he will still be involved with the chapter, but he is ready to start a new chapter in his life.

“I’ll always be a loyal supporter of the NAACP,” Teamer said.