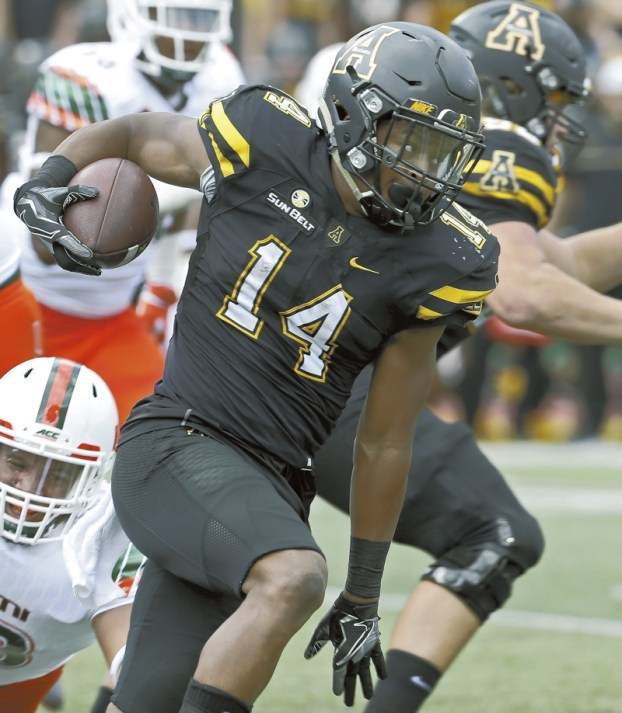 MONTGOMERY, Ala. (AP) — Appalachian State and Toledo have matching 9-3 records, running backs chasing the same career milestone and head coaches who are friends and former co-workers.

“Their players are a lot like us,” Mountaineers coach Scott Satterfield said. “They’re hard-nosed, they play hard, they’ve got a chip on their shoulder. You’ve got two teams playing with basically the same kind of blueprint. It should be a great game.”

The first two bowl games in Alabama’s Capital City have been pretty darn good, each going down to the final minute.

Appalachian State returns for the second straight year after beating Ohio 31-29 on a last-play field goal in the program’s NCAA bowl debut. Both teams have sturdy running games, but the big question is whether the Mountaineers can slow down quarterback Logan Woodside and the Toledo offense.

Woodside leads the nation with 43 touchdown passes while throwing for 3,882 yards and getting intercepted only nine times. The Rockets’ 529.8 yards per game would easily be the program’s highest for a season.

Appalachian State won a share of the Sun Belt Conference largely on the strength of the league’s best running game and a defense that is allowing 17 points per game, seventh fewest nationally. Woodside faces a defense that ranks third in the nation with 20 interceptions.

Toledo coach Jason Candle said what stands out about the Mountaineers is “just the physical brand of football that they play.”

“They’re not afraid to roll their sleeves up and mix it up,” said Candle, in his first full season as head coach. “I think with most really good football teams, that’s one characteristic you would be able to say.”

Running backs Marcus Cox of Appalachian State and Toledo’s Kareem Hunt both are within striking distance of 5,000 career rushing yards.

BRAGGIN’ RIGHTS: Both teams are seeking a 10th win and to represent their respective leagues. Appalachian State won a share of the Sun Belt Conference title. Toledo finished second in the Mid-American Conference behind No. 12 Western Michigan. “For us, in Group of Five schools, you want to have bragging rights against these other conferences and other teams,” Satterfield said.

CAMELLIA HISTORY: These two teams have a lot to live up to. The Mountaineers dramatic ending came only after rallying from a 24-7 deficit then losing the lead again. Bowling Green won the first Camellia Bowl 33-28 over South Alabama on a 78-yard touchdown pass with 64 seconds left. A roughing the punter penalty enabled Bowling Green to run out the clock after the final drive initially stalled.

COACHING FRIENDS: Satterfield was Toledo’s quarterbacks coach and passing game coordinator in 2009. Candle coached the team’s slot receivers and tight ends that year. They remain friends. “That year in 2009 was a great bonding year for us,” Satterfield said. “In this profession you have those kind of friends and you just want to continue those relationshsips in the business.”

CANDLE’S BOWL PREP: Candle led Toledo to a bowl win last season over then-No. 24 Temple, 20 days after his hiring while also working on keeping the recruiting class together and hiring a staff. “That was a lot of sleepless nights and a lot of moving and shaking,” he said. “This is a little different.”

From staff and wire reports Carson’s boys basketball team rallied to pull out a 73-71 win at Northwest Cabarrus on... read more