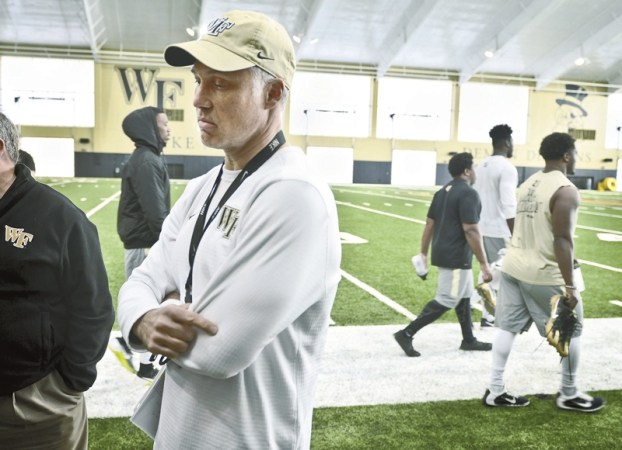 Wake Forest head football coach Dave Clawson speak with reporters Thursday, Dec. 15, 2016, in Winston-Salem, N.C. Clawson expressed his shock and dismay at revelations that a trusted former coach had been named by the university as the alleged source of team information that was leaked to other schools. (David Rolfe/The Winston-Salem Journal via AP) In this Dec. 9, 2006 file photo Tommy Elrod walks on the field while he was serving as assistant coach at Wake Forest University. Elrod, who has served as a radio announcer for the Deacons football games since 2014, has been identified by Wake Forest as the source of leaked game plans found at the University of Louisville. (Kelly Bennett/Winston-Salem Journal via AP)

Babcock said in a statement Thursday that he has no indication that the information was shared with staff members or used during the game. Retired coach Frank Beamer also said he “had no knowledge of what is being alleged.”

Babcock did not identify the assistant coach. Wake Forest won that game 6-3 in double overtime and finished the season 3-9.

Virginia Tech joins Louisville and Army in acknowledging their involvement in the scandal in which former Wake Forest assistant Tommy Elrod was fired as the analyst on Demon Deacons’ radio game broadcasts after the school determined he leaked or attempted to leak game plans.

“We are disappointed and embarrassed that this type of information was distributed to, and apparently received by one of our former assistant coaches,” Babcock said.

The unidentified assistant did not remain on the staff when Beamer retired and was replaced by Justin Fuente, Babcock said.

Earlier Thursday, Wake Forest coach Dave Clawson said he feels betrayed and that his players were cheated by a former assistant coach-turned-broadcaster who peddled Demon Deacons’ plays to opponents.

“I’ve never experienced this level of betrayal in coaching,” coach Dave Clawson said after his team’s first practice since the school made public the results of a nearly monthlong internal investigation into potential leaks of game plans.

“The big thing is that (the players) were cheated — they were not given a fair chance to compete on multiple occasions, but there’s nothing we can do about it,” Clawson said. “We found out what happened, we found out who did it, they’re no longer part of our program and now we need to move forward and try to win a bowl game.”

The school’s review, which began after documents related to the team’s game plan for the Nov. 12 game at Louisville were found at the Cardinals’ stadium, placed the blame on Tommy Elrod. He is a former player and assistant under the previous staff who moved into the broadcast booth during a coaching change after the 2013 season.

Elrod was fired as an analyst on the Demon Deacons’ IMG College radio broadcasts and was banned from the school’s athletic facilities. His attorney, former Wake Forest player James Quander, declined comment Thursday, and Elrod has not returned phone calls and text messages.

“Yeah, I’d say I’m mad — that’s fair,” quarterback John Wolford said. “You’re expected to play a fair game and when you don’t get that opportunity, a lot of times, that negatively impacts you. Maybe the impact was nothing, maybe it was nil, maybe tiny, so I don’t want to overemphasize that, but the fact that it was attempted to happen and maybe did happen. It does anger me.”

Citing advice from the school’s lawyers, Clawson declined to offer any additional specifics on how many games may have been affected, or exactly how the plays were obtained and transmitted.

The Associated Press has requested comment from every Bowl Subdivision team the Demon Deacons have played since 2014.

Wake Forest officials say they’ve contacted other schools that were involved, leaving it up to them to come forward. The Atlantic Coast Conference has said it will do “its due diligence” when it reviews the school’s findings.

With Wake Forest saying it knows who took the plays, the focus shifts to the schools that may have received them.

Members of Wake Forest’s travel party found the documents at the stadium before the game, which the Cardinals won 44-12 after Wake Forest took a 12-0 lead. The school began its investigation days later.

“That next month of not knowing how it happened was miserable,” Clawson said. “Just in your own office, you’re wondering who did this. It was not a great working environment because nobody trusts anybody.”

Going forward, security is certainly going to be tightened at Wake Forest, long been one of the most open programs in the ACC, a reputation that dates back to Jim Grobe’s practices routinely being open to the general public. Things haven’t been quite that unrestrained under Clawson’s leadership, though his weekly news conferences during game weeks are generally followed by informal, off-the-record conversations with media members.

One of the regulars in that crowd was Elrod.

“We’ve always tried to be media-friendly. We’ve always given more access to media probably than any program in the ACC, and that will have to change,” Clawson said. “It’s not fair to our players. … You can’t compromise your program and your staff and your fan base.”