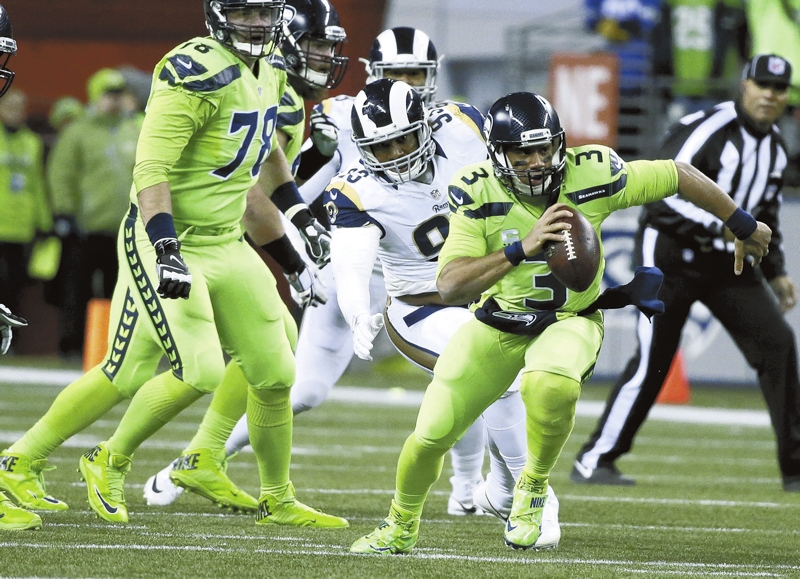 SEATTLE (AP) — Russell Wilson threw three touchdown passes, Tyler Lockett had 130 yards receiving and a score, and the Seattle Seahawks won the NFC West title with a 24-3 victory over the Los Angeles Rams on Thursday night.

Seattle claimed its third NFC West title in four seasons, assuring itself of at least one home game in the playoffs and keeping the pressure on Detroit in the competition for the No. 2 seed in the NFC and a first-round bye. Seattle also snapped a three-game losing streak to the Rams.

It wasn’t an impressive display by Seattle (9-4-1), but was far better than Sunday when the Seahawks were blown out by Green Bay with Wilson throwing five interceptions.

Wilson was good enough against the listless Rams. After slogging through the first half, Wilson threw a 1-yard touchdown pass to Doug Baldwin late in the third quarter for a 17-3 lead, then put the game away on a 57-yard touchdown strike to Lockett on the second play of the fourth quarter.

Wilson finished 19 of 26 for 229 yards, but also threw a careless interception at the goal line midway through the fourth quarter. Seven of those passes went to Lockett, whose previous career high was 104 yards. Luke Willson also had an 8-yard TD catch in the first half.

Another mostly forgettable Thursday night game was made at least somewhat more entertaining by the Seahawks and their highlighter green uniforms that drew wild opinions all over social media. The “Action Green” uniforms had very little action in the first half, before a second-half effort that assured another banner would be raised at CenturyLink Field.

A tumultuous few days for the Rams (4-10) after the firing of Jeff Fisher as head coach culminated in their fifth straight loss and first under interim coach John Fassel. The Rams’ defensive front caused problems for Seattle in the first half but the Los Angeles offense provided zero help.

Los Angeles running back Todd Gurley was again unable to get started in the run game, continuing a frustrating second season. Gurley was held to 38 yards on 14 carries. He did have a 22-yard run late in the second quarter that set up Greg Zuerlein’s 36-yard field goal, but it as just his second run of 20 yards or more this season. Gurley had 11 runs of 20 or more yards last year.

After getting no pressure on the quarterback in the past three weeks, the Seahawks rediscovered their pass rush.

Seattle had two sacks in the first half and finished with four after the Seahawks had five total sacks in the previous five weeks. Cliff Avril was the main culprit with 1 1/2 sacks, giving him a career-high 11 1/2 for the season.

Seattle defensive end Michael Bennett suffered a concussion in the fourth quarter on a collision with Gurley. A few plays later, Goff was taken from the game to be checked for a concussion after a sideline hit by Richard Sherman. He was replaced by Case Keenum.

Even Seattle punter Jon Ryan got added to the injury list after suffering a possible concussion in the fourth quarter on a fake punt. Ryan ran 26 yards before bobbling the ball and getting hit in the helmet falling to the turf.

Seahawks: Seattle will host Arizona in its final home game.