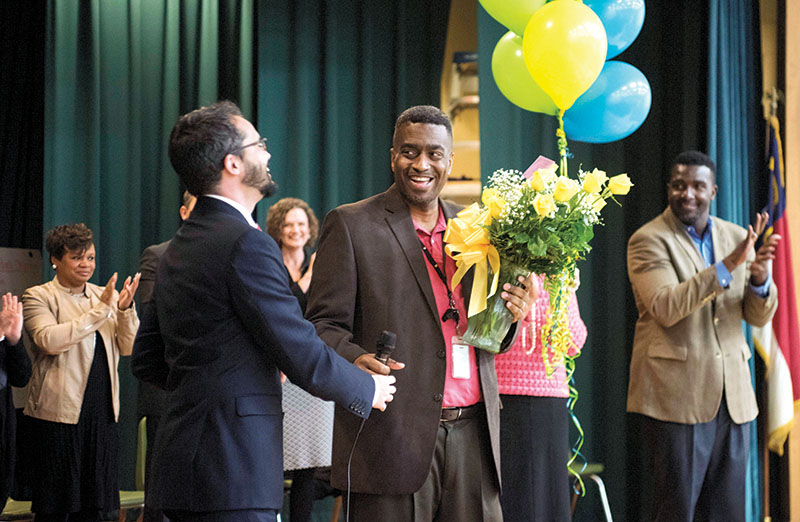 JON C. LAKEY / SALISBURY POST Rowan-Salisbury School's Teacher of the Year Anthony Johnson was given the news that he was named Southwest regional Teacher of the Year for North Carolina. The announcement was made during an assembly at Isenberg Elementary School on Thursday. Bobbie Cavnar, The 2016 NC teacher of the year (left) made the official announcement. Thursday, December 15, 2016, in Salisbury, N.C.

SALISBURY — Isenberg Elementary Principal Marvin Moore said that for the past month, Anthony Johnson hasn’t stopped asking about Regional Teacher of the Year.

Johnson was named the 2016 Teacher of the Year in August, which put him in the running for the state’s Southwest Region award. After he interviewed for the title, Johnson began asking Moore if he’d heard anything.

Moore put him off, and put him off — until Thursday morning. At a school-wide assembly, Moore, together with the 2016-17 State Teacher of the Year Bobbie Cavnar, announced that Johnson won the region.

“Being named Regional Teacher of the Year is not just an honor, it’s a call to action,” Cavnar said.

For the duration of 2017, Johnson will serve on a state leadership team comprised of other teachers, and will tackle problems facing public education in North Carolina.

“Mr. Johnson has proven himself worthy of the mantle of leadership,” Cavnar said.

During his short announcement, Cavnar quoted Johnson’s students, who had told interviewers that the fourth- and fifth-grade science and social studies teacher was passionate, inspiring, someone who wants the best for his students, a “dream maker” and “a light in the darkness.”

“It kind of caught me off guard,” Johnson said of the announcement.

He added that the moment felt “surreal.”

Johnson is known throughout the school for his practical and real-world approach to teaching. Students in his class pay rent for their seats, manage expenses and even run businesses. They also work with 3D printers, drones, weather balloons and video.

Moore said that part of what makes Johnson a good teacher is because he knows what it’s like “to be a kid in a tough situation.” Johnson dropped out of high school when he was 16, and the experience has fueled the way he approaches the classroom.

And Moore said he thinks that Johnson has a good shot at getting State Teacher of the Year.

“If there is one other teacher in the state who is better than him, I want to meet him, because I don’t believe there is,” he said.

Johnson is now one of nine teachers across the state in the running for the award — a journey which started with more than 2,678 Teachers of the Year being chosen in individual schools statewide.