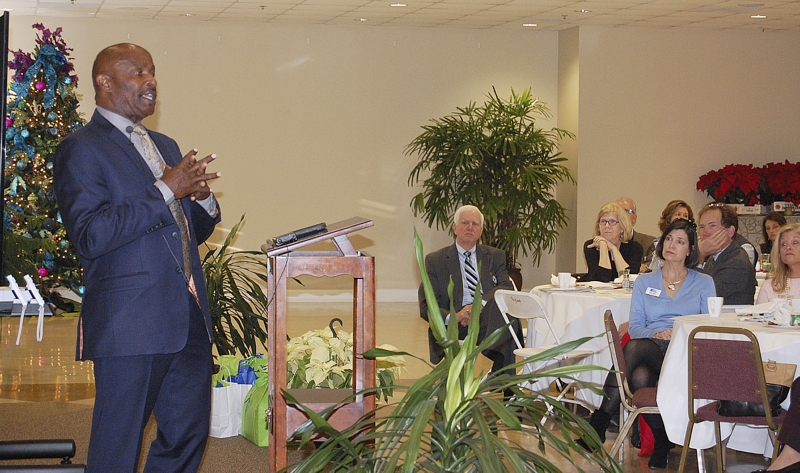 Amanda Raymond/Salisbury Post Rev. Richard Joyner was the speaker at the Rowan County Chamber of Commerce's December Power in Partnership breakfast at Trinity Oaks. Joyner talked about the importance of using resources in the community to solve community issues.

SALISBURY – Everything a community needs to improve can be found in that community, according to Power in Partnership breakfast speaker the Rev. Richard Joyner.

The Rowan County Chamber of Commerce held its December Power in Partnership breakfast at Trinity Oaks on Thursday.

The not-for-profit organizations were this month’s sponsors.

Joyner talked about the success his community has experienced by using community gardens.

Joyner is senior pastor of Conetoe Missionary Baptist Church in North Carolina and board chair of Conetoe Family Life Center.

He started the center after noticing health problems in the church and town, many of them preventable.

Joyner has received numerous awards because of his work in Conetoe, including being named as a top 10 CNN National Hero.

“My heart is out to communities,” he said. “…I do not like farming, but children – the hearts of children, saving children – will motivate you to do things that you wouldn’t normally do,” he said.

He took a moment of silence to acknowledge the death of A’yanna Allen, a 7-year-old who was shot and killed in her grandmother’s Salisbury home on Dec. 4.

Joyner said his main focus with his program was to make communities self-sustainable. The program eventually all boiled down to food, so they started the Conetoe Human Development Sustainability Garden.

Joyner said they researched how much money schools, hospitals and restaurants in the area were spending on food.

Joyner said the youth of the community were instrumental making the program a success.

“I can tell you that the CNN award and most of the awards that we have gotten over this process is because the youth on our board of directors are the majority vote and they have outvoted us every time,” he said.

It was the youth’s idea get bees to pollinate the plants and expand the land of the garden.

One of the youngest children to pass the beekeeping class was 8 years old and fought to get the county and state policies changed so that she could be certified. She won, and will be among the group gardening with First Lady Michelle Obama at the White House.

Businesses that have moved into the area have gotten involved with the gardens, and food from the garden is in the schools.

At the end of his talk, Joyner emphasized the importance of different segments of the community working together to solve local issues.

“… We have everything we need to save ourselves,” he said. “We just have to unite it.”

The next PIP meeting will be on Jan. 19 with a focus on the economic outlook.