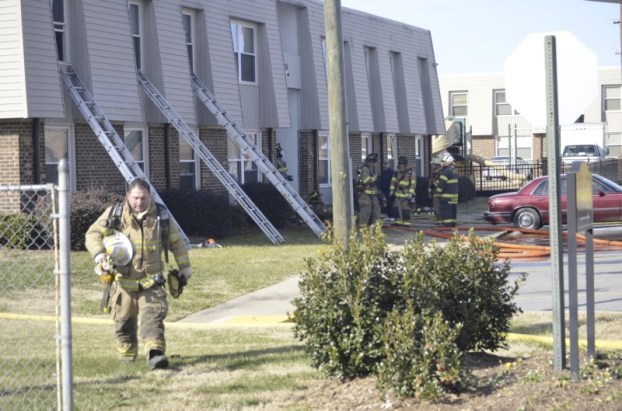 Battalion Chief David Morris walks away from the scene of a fire at Clancy Hills Apartment complex. Officials say it appears there was smoke in duct work in the building. Multiple fire departments responded to the fire. The occupants of the apartment were able to get out without injury. Shavonne Walker/Salisbury Post Multiple fire departments responded to this fire at Clancy Hills Apartment complex Thursday after smoke was believed to be in the duct work. The occupants were able to get out without injury. Shavonne Walker/Salisbury Post

SALISBURY — Officials say 19 people will need the assistance of the American Red Cross after smoke from a light fixture caught a wall on fire at Clancy Hills Apartment complex.

The renter called for fire personnel after she saw black smoke inside her bathroom, said City Fire Marshal Terry Smith.

The smoke was around a light fixture, he said, and fire began to spread into the wall. Smoke spread to the other apartments, causing damage to one of six. The one, where the fire originated, had both smoke and fire damage, Smith said.

The fire was confined to the bathroom, he said.

The woman and her small child were able to get out of the apartment.

It was contained pretty quickly, Smith said. Within 15 minutes the fire was under control, but there was a lot of clean up.

There’s been some construction and renovation going on at the complex. Smith said because of those ongoing renovations smoke was able to spread into the other apartments.

None of the residents can stay in their respective apartments. The Red Cross is assisting 19 people.

Power to the units was cut off, Smith said.

There were no injuries to occupants or firefighters reported.

The initial fire call was made around noon.

Better Business Bureau  Today’s kids are more tech-savvy than ever. Thanks to technology, they can send their Christmas wish list... read more