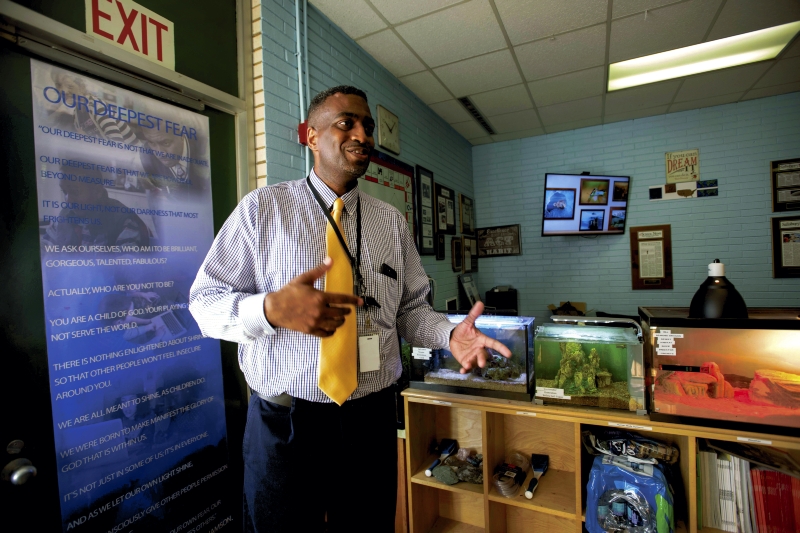 JON C. LAKEY / SALISBURY POST The teaching style and success of Isenberg Elementary 4th and 5th grade Science and Social Studies teacher Anthony Johnson has not only students clamoring to get into his classroom but has also garnered the Rowan Salisbury School Teacher of the Year. Thursday, December 1, 2016, in Salisbury, N.C.

SALISBURY — It’s the beginning of the month in Johnsonville and rent is due. Students in Anthony Johnson’s class lay down colorful “Johnsonville dollars” on a table representing the bank.

Each student is expected to pay rent depending on where they sit. A plain seat at a collaborative table — Johnson’s classroom doesn’t have desks — is $500. A seat at a long bar running down one wall is about $1,500 and a coveted seat on the couch is $2,000 a month.

Students earn $100 Johnsonville dollars a day by showing up at class and completing their daily work. They can use the money to pay rent, buy items in the classroom, participate in food days or own and operate classroom businesses.

Johnson, 45, isn’t your traditional teacher — but that’s because he never saw himself as one.

“I never wanted to be a teacher,” he said.

As a child growing up in New Orleans, Johnson failed four grades — fourth, seventh, eighth and ninth. It was that last year, he said, that a school guidance counselor met with him and his father and told him that school was probably “wasting his time.” Johnson dropped out. He was 16.

He got a GED, and spent the next nearly 15 years working minimum wage jobs. In 1998, Johnson buried his mother. The next day, Johnson and his family packed up and moved to Salisbury, where his wife, Dr. Desiree Johnson, had been recruited by the local hospital. It was a hard time for Johnson.

“I was depressed and just sat at home,” he said.

Six months later, his father also passed away. By then, Johnson started to come out of his depression and began thinking about where his life had gone wrong.

“I did a lot of soul searching,” he said, “…and I thought about school.”

He thought back to that first year he’d failed a class in fourth grade. That was where his life started getting off track, he determined.

As a kid, he’d dreamed of being a band director — he dreamed of it still. Shortly after, Johnson enrolled in Livingstone’s music education program.

At the time, Livingstone required all of its students to do 10 hours of community service. Johnson ended up helping out in a classroom at Isenberg Elementary. There, he saw the same practices that had allowed him to, and was letting other students, slip through the cracks.

“I saw those same kids,” he said, “and I saw myself in them, and I knew what was going to happen to them.”

It frustrated him so much that Johnson switched his major to elementary education.

“And I guess the rest is history,” he said.

But Johnson’s past has strongly influenced his teaching. He knew early on that he wanted his students to deal with reality, not theory. It’s why they pay rent, have classroom responsibilities and why, in Johnsonville, everything is a collaborative effort. Johnson also knew that he would never work in a classroom that had plain, white walls and rows of desks and chairs.

“It was going to look different,” he said, “and that’s what I did. I created Johnsonville.”

Johnson is in his 14th year of teaching and was named in August as the 2016-17 Teacher of the Year. His classroom is colorful and chock full of tools and resources. Johnson’s students care for a variety of classroom pets, including several kinds of fish, a bearded dragon and a tarantula. They launch weather balloons, make models with a 3-D printer, work with drones and robots or film activities and presentations using a GoPro.

Johnsonville is the talk of the school, with students as young as first grade eager to be in his class when they, too, reach the upper grades.

Johnson has moved around some, working at Overton as a technology facilitator and doing a stint in Cabarrus County schools, but came back to Isenberg three years ago. It’s home.

At the beginning of the year, he gives each student a business card that says “Occupation: student.” It’s their job right now, he explains to them, and he wants them to do it well.

“If we are preparing these kids to be successful in the real world, we need to be simulating this stuff in the classroom,” he said.

He’s an Apple Distinguished Educator and has been participating in Apple professional development and training every summer since 2011. This year, that training took him to Germany.

This year he was also named a TED Educator, one of only 30 educators from around the world to be chosen for the honor. As part of this, his class will set up the “Johnsonville Learning Network” a weekly live broadcast from the classroom, in addition to the class’ already running YouTube and Vimeo channels.

Johnson may not have started out wanting to be a teacher, but now, he can’t see himself doing anything else.

A few weeks ago, an old student messaged Johnson to tell him how much Johnsonville had impacted his life. The student is now grown, and leading a successful career — and for Johnson, that sums it up.