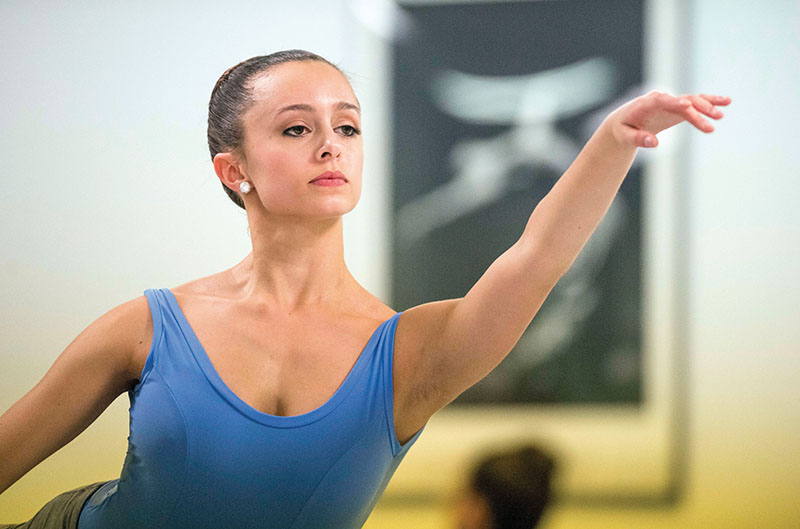 JON C. LAKEY / SALISBURY POST Catherine Livingston, from Davidson, leads a warm up class at the dance studio in downtown Kannapolis. Later in the enening, Livingston will dance as the Sugar plum Fairy in the 2016 performances of the Nutcracker ballet held at the Kannapolis Performing Arts Center. Piedmont Dance Theatre has been presenting the holiday classic performances since 2003. Friday, December 9, 2016, in Kannapolis, N.C.

To a casual observer, Catherine Livingston looks like just another girl in a coffee shop. In reality, she’s the Sugar Plum Fairy.

Catherine, a fresh-faced 18-year-old, will dance the most demanding role in “The Nutcracker” this weekend in performances in Salisbury. The 10th annual event is staged by Piedmont School of Music and Dance and the Salisbury Symphony. “The Nutcracker” takes place at 6:30 p.m. Saturday and 2:30 p.m. Sunday at Keppel Auditorium on the Catawba College campus.

“It is technically the most challenging role of the entire ballet,” Rebecca says. “It requires stamina, strength, and technical proficiency. In Salisbury, we always hire out the Sugar Plum Fairy.”

Dancers from New York, San Francisco and Cincinnati have filled that role in recent years.

“We’ve hired ballerinas from major companies to play this role,” Rebecca says, “but Catherine is holding her own just fine.”

A year and a half ago, Rebecca and her husband, Daniel, also a dancer, began grooming Catherine for the role.

Then Catherine broke her foot on the first rehearsal of the season last September.

“That was one of the hardest things I’ve mentally had to deal with,” says Catherine, her brunette hair pulled back into a ponytail. I was helping at another rehearsal and landed wrong on a jump. I heard a big pop. It began to hurt and I felt dizzy. I said, ‘Miss Rebecca, can I just sit down?’”

Catherine wore a boot and used crutches for weeks.

“I really like to be moving,” she says. “I was able to perform later in the corps de ballet. I found other ways to help the people around me. That’s what kept me sane.”

Physical therapy with a group that works with Charlotte Ballet helped her heal. JON C. LAKEY / SALISBURY POST Catherine Livingston, from Davidson, performs as the Sugar Plum Fairy in the 2016 performances of the Nutcracker ballet held at the Kannapolis Performing Arts Center. Samuel Chester danced the part of the Cavalier.

So during the spring, Rebecca and Daniel gave her assignments that would help her prepare for the Sugar Plum Fairy role.

“I do feel a lot of pressure,” Catherine admits, “but Miss Rebecca would never do this if she didn’t have 100 percent faith in me. That gives me the confidence and belief to do my best.”

Catherine is the daughter of Eric and Lisa Livingston of Davidson, and is close to her younger sister and only sibling, Caroline, 16, a cross-country runner who’s state ranked.

Catherine is a senior at Cannon School, where she is president of the Chinese Club and a member of the Gender Sexuality Alliance. Her favorite classes are physics and computer science, and she also enjoys her calculus BC class.

“I’m a big math and science student,” she says, flashing her brilliant smile. “People are surprised by that.”

Catherine has been dancing since she was 2, and came to Piedmont School of Music & Dance when she was in sixth grade.

“I wanted a different experience,” she says. “I thought it would help me become a better dancer, and it’s been much more than I ever expected.”

She also took gymnastics, but eventually focused all her time on dance.

Catherine’s time on the stage won’t end this week. In fact, that’s just the start, as she plans to pursue a career as a professional dancer.

“I realized how much fun I had every day in the studio,” says Catherine, who has her own studio key and dances six days a week — sometimes seven.

She adds, “As I kept working, Miss Rebecca brought up the possibility that I could dance professionally.”

That’s typically not something the Wileys encourage, Rebecca admits. “We prefer they go to college and minor in dance.”

But the Wileys saw professional-level potential in Catherine, who was invited to the summer program at Houston Ballet, then invited to train there.

“But I told Catherine if she’d stay here, Daniel and I would do whatever it takes to help her become a professional dancer,” Rebecca says. “She is one of the brightest and emotionally stable people of anyone I’ve ever met — including adults. She has nerves of steel. I’ve never met anybody as far as her ability to process information and translate that to her body.”

Catherine is excited and humbled to take the Keppel stage this weekend with Sam Chester of Huntersville, dancing in the role of the Cavalier.

“We like to think we have a great connection,” Catherine says, “and we want people to feel that connection and we hope it will remind them of the Christmas spirit. I want to represent what the music is.”

To order tickets for this weekend’s performances of “The Nutcracker,” visit salisburysymphony.org.