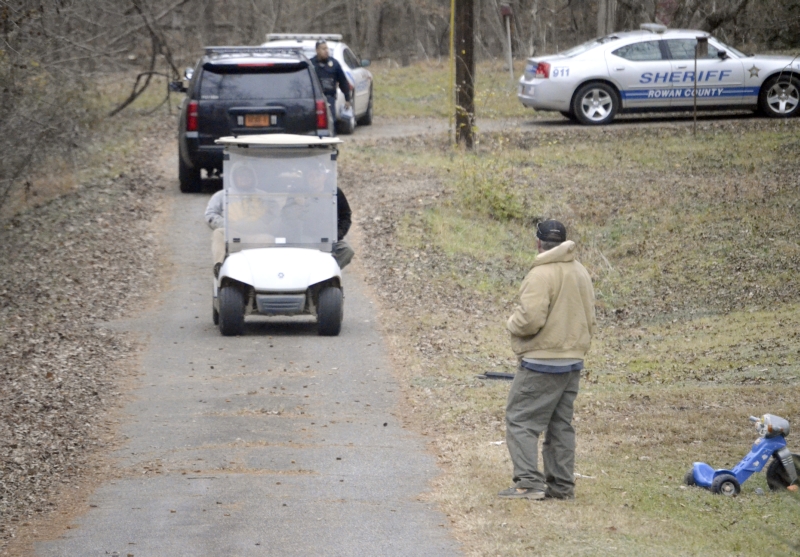 A man Rowan Sheriff's deputies were pursuing took them on a chase, stole this golf cart on Tuesday from Rolling Hills Golf Club, drove it across Mooresville Road and parked it beside a home on Ludwick Heights Lane. Officials found a gun and drugs at the scene. Shavonne Walker/Salisbury Post

SALISBURY – A car, foot chase took Rowan authorities, police and highway patrol through a golf course and into the woods for a man who fled from them on Tuesday morning. Officials say investigators seized drugs and a gun from the scene.

A Rowan County Sheriff’s deputy attempted to stop a green Honda near Rowan Mills Road, but the driver kept going. Eventually the chase took both the officer and suspect down a dirt path.

The man, who has not yet been identified, fought the officer, who deployed his Taser.

According to Rowan Chief Deputy David Ramsey, the Taser had no effect. The man assaulted the officer and ran onto Rolling Hills Golf Club.

The officer chased the man across the 12th hole. Officials say the man jumped into a golf cart parked further up a hill.

The golfer said he saw the deputy chasing the man and jumped out of the way.

The suspect drove the cart across the course, through the woods and came out near a car wash at Mooresville Road and Sunset Drive, a golf club employee said.

Salisbury Police, the N.C. Highway Patrol, with the assistance of law enforcement K-9s also searched the area of Sunset Drive and Jake Alexander Boulevard looking for the suspect. The highway patrol searched by vehicle and helicopter.

The man crossed four lanes of travel on Mooresville Road in the golf cart. The cart, with the golfer’s clubs still attached to the back, was found abandoned beside a house in the 1400 block of Ludwick Heights Lane.

The suspect ran into nearby woods. Rolling Hills Golf Club employees drove the cart back across Mooresville Road, escorted by law enforcement.

Ramsey said the investigation is ongoing.