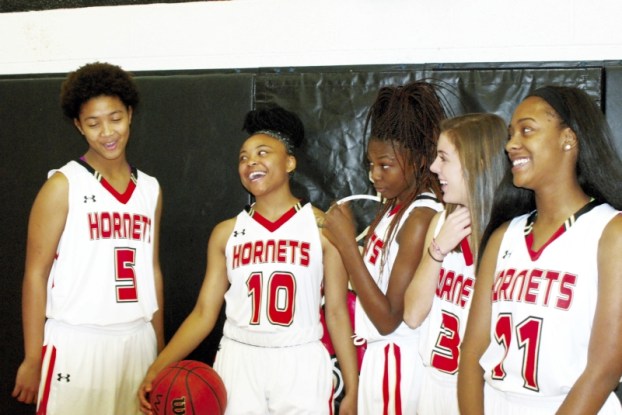 SALISBURY — Salisbury girls coach Lakai Brice is not afraid to speak her mind.

After advancing to the state 2A playoffs first round last season with a 14-12 overall record, Brice believes the Hornets are ready for even bigger things in 2016-17.

“We have nearly the entire team returning from last year, so my expectations are very high,” said Brice, beginning her fourth season at the helm. “We’ve got all of the pieces in the right spots and it’s going to be an exciting year. I’m smiling.”

Brice actually said those words a couple of weeks ago and the Hornets have not disappointed. They’re off to a 5-1 start this season. Salisbury got off to a 6-1 start last year before its record started creeping back towards the .500-mark, but on paper, the Hornets do have some talent that has another year of experience in the bank.

Salisbury actually had all five starters back for last season, but unfortunately, those plans didn’t last long. Sophomore Tacorra Robinson suffered a severe knee injury in pre-season practice and is expected to be out for the entire year.

But that injury opens a spot for super freshman Anayia Fulson, who may have started any way at point guard. Brice says that Fulson, a cousin of legendary Salisbury star “Bubbles” Phifer, can do it all — push the ball upcourt, pass it and shoot it.

Troutman was a special freshman in 2015-16, leading the team in scoring and showing the ability to take over a game. At 6 feet, Troutman has all of the tools and Brice said that she is already getting interest from college coaches.

“Bryanna is unbelievably gifted and she’s starting to show some leadership qualities now, after being pretty quiet as a freshman last year,” said Brice. “She’s been more vocal and has taken Fulson under her wing because she went through being a freshman on the varsity last year.”

Alexander and Mystjkal Phifer are the team’s only seniors and have been with Brice since she took over the coaching duties. “There’s no substitute for experience and those two girls have it,” said Brice. “And Tyzarea has really improved her outside shooting.”

Capito is still Salisbury’s main 3-point field goal threat. With another solid year, the junior guard will be on pace to score 1,000 points during her career. “Maria is still Maria, our shooting specialist,” said Brice, “and she has improved on her mid-range jumper as well.”

So, all in all, you can see why Brice is optimistic about the season and possibly challenging East Davidson for the top spot in the Central Carolina Conference.

“Every year, I come up with a motto for the season,” added Brice. “This year, it’s ‘confident and ready to win.’ We’re ready to win. It’s time and we’re going to make some noise.”

Bryanna Troutman — 6-0, soph., forward — Started as a freshman last year and averaged 13.4 ppg. Can do it all on the court and is growing into a leadership role.

Anayia Fulton — 5-8, freshman, point guard — Like Troutman, expected to start as a freshman and should give the Hornets quite the 1-2 punch for years to come. According to Brice, has all of the tools.

By Mike London mike.london@salisburypost.com MOUNT ULLA — There was nothing wrong with the West Rowan girls that 70-percent shooting couldn’t... read more