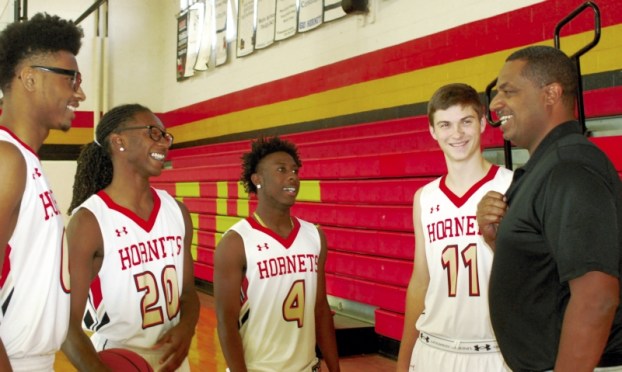 SALISBURY — Salisbury boys coach Bryan Withers now has a year under his belt at the place where he once starred on the basketball court himself.

What a difference a year makes. Withers has found a comfort level.

Not that 2015-16 was a bad experience. The Hornets were 18-5 overall, second in the Central Carolina Conference and on the way to the state 2A playoffs when the much-publicized scuffle with rival North Rowan led to an abrupt end to the season (as ruled by the NCHSAA).

“I feel great about the second year here,” said Withers, who has also been head coach at South Rowan. “It’s a total different feeling. The players know me better and what I expect, so therefore, they just come in and get it done. That’s been the biggest thing. Our staff is really pleased with how hard they go every day. As a coach, you appreciate that, because you know that they want to get better.”

Salisbury has started this season 4-2, including splitting two tight battles with Greensboro Smith, a very big and talented team.

“It’s early, but I’m very excited about this team,” continued Withers. “They just get after it.”

Gone are graduates DJ Alexander, Wes Fazia and John and Alex Yang, all valuable seniors on last season’s team. Alexander was the leading scorer at 11.9 point per game and scored 1,052 career points. Fazia averaged 8.3 points per game with his 6-7 frame inside and no one hustled more than the Yangs.

“Last year … it’s always tough on seniors when a new coach comes in but what they have to realize is that they were part of the building blocks of this program,” added Withers. “So they can include themselves in anything that this program accomplishes this year and in the future.”

Senior post player Tre Oats looks to have a big year. Oats rotated out with Alexander and Fazia but this year, barring foul trouble, should see a lot more minutes. He averaged 10.2 points per game last season, behind the two seniors.

Another 2017 senior, sharpshooter Will Leckonby, has gotten bigger and stronger without affecting his stroke. He averaged 6.6 points per game as junior but is poised for much more production. He’s already had a game this year where he knocked down six 3-pointers.

Ultra-quick guards Trell Baker (11.1 ppg) and Shaleek Williams will reek havoc for opponents with their ball handling and slices to the basket but Withers expects junior guard Oshaun Robinson to play a big role and keep things under control on the court.

“Robinson is probably the team leader, even though he’s a junior,” said Withers. “He does so many good things for us and accepts any role you give him and does his best with it. That’s what I like about him.”

Withers likes his team to play an up-tempo brand of basketball, so therefore, he keeps a lot of players on the team and plays a lot of different combinations. That style will again be evident this season.

“Last year, we played so many players that the juniors got plenty of experience,” Withers explained. “I don’t really see a drop off this year. We’ve got some really good talent. I keep a lot of players, though, so it will look like a football team at times, but the more players that are around, the more we can develop them.”

Another big man, Bill Fisher, just a sophomore, will spell Oats at times. “Practicing against Tre and Zae (Harris) only helps Bill. He had a great summer playing AAU and he’s worked hard and deserves to be up here with us (instead of jayvee).”

Although it’s a numbers game, Withers is counting on Oats, Leckonby, Williams, Baker, Harris and Robinson to have big years.

“The upperclassmen need to step it up, but we have a lot of depth at a lot of positions and that helps us a bunch with the way we want to play — fast.”

Will Leckonby — Senior, shooting guard — Bigger and stronger this year but still can shoot from downtown. He’s already had a game this season with six 3-point field goals.

Trell Baker — Junior point guard — Lightning-quick up and down the court, he gets a lot of fast-break points. Second on the tem last year with 11.1 ppg.

Oshaun Robinson — Junior guard — Didn’t play that much last season (3.0 ppg) but is expected to play a key role this year. Withers called him one of the team leaders.

By Aaron Beard AP Basketball Writer RALEIGH (AP) — Kentucky has already spent time at No. 1 in the AP... read more